Repair wizards over at iFixit along with their pals at Creative Electron gave Apple’s new $9 iPhone 7 Lightning headphone adapter a thorough X-ray treatment. The analysis has revealed a surprising amount of circuitry inside of the dongle.

Most notably, it packs in a pretty unique integrated circuit that’s most likely a built-in digital-to-analog (DAC) converter. There’s actually a lot going on in the diminutive adapter aside from the DAC, writes iFixit, including things like an integrated amplifier and an analog-to-digital-converter (ADC).

“We’re surprised how much electronics Apple was able to include inside this little cable,” said Creative Electron, which builds X-ray inspection systems for electronics.

Prior iPhones handled both DAC and ADC functions internally via a custom Apple/Cirrus Logic chip on the logic board. The X-ray analysis of Apple’s headphone dongle reveales integrated circuitry marked “338S00140 A0SM1624 TW”.

iFixit and Creative Electron think it’s most likely some sort of a DAC chip.

The dongle connects legacy 3.55mm headphones to the iPhone 7, with one end providing a standard female 3.5mm port while the other is a male Lightning connector.

Here’s a visual comparison of the CirrusLogic audio chip on the iPhone 7’s logic board next to the exposed DAC/ADC/amplifier chip in the new Lightning headphone adapter. 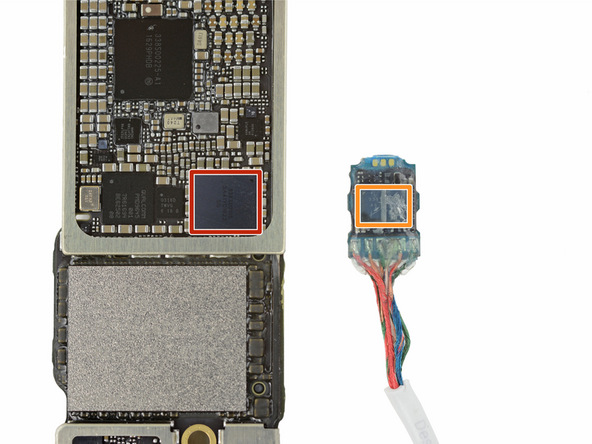 The larger iPhone 7 chip “handles more than just DAC/ADC,” explains iFixit, as it also integrates a media codec. It’s not believed to contain an amplifier because there are three dedicated amplifier chips located elsewhere on the iPhone 7 logic board.

As for audio quality:

The takeaway seems to be that in some areas, the sound quality does measure a bit worse from the adapter than we might be accustomed to. For instance, when playing an uncompressed 16-bit audio file on the iPhone 6s, the dynamic range dropped from 99.1 dB at the headphone jack to 97.3 dB at the adapter.

Though keep in mind, this slightly lower measurement is still higher than the theoretical maximum you get from a compact disc (which is 96 dB). So, is it a difference you are likely to notice? If you sit in a quiet room with a really, really good pair of headphones … and you’re a canine, the answer is: maybe.

Ultimately, it appears Apple’s engineers “did their job” because, as iFixit writes, the tiny adapter seems to perform “better than most people expected or even thought possible”.

Because the iPhone 7 and iPhone 7 Plus lack the 3.5mm headphone jack in favor of Bluetooth headsets or wired Lightning-based ones, Apple’s dongle requires DAC circuitry to convert the ones and zeros from the all-digital Lightning connector to analog signals that audio accessories like 3.5mm headphones need to work.

By the same logic, the adapter also needs ADC circuitry to convert analog signals from a headphone’s embedded microphone into ones and zeros that are fed to the handset via the Lightning port.

However, both new iPhone 7 models still pack in the CirrusLogic chip in order to drive their built-in loudspeakers and microphones, all of which use analog signals.