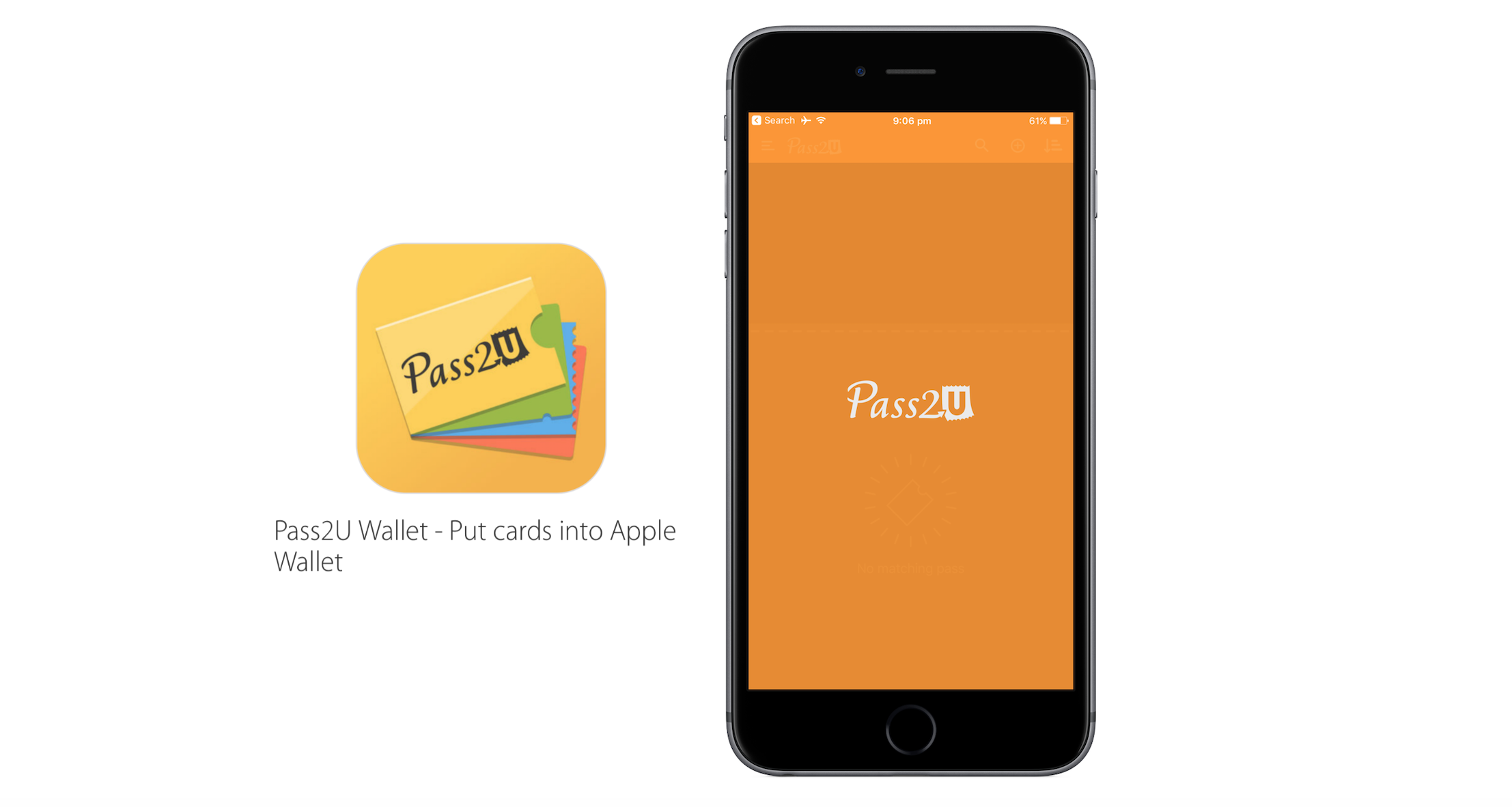 Based on the continuous growth of Wallet for ticketing services and Apple Pay, Apple’s bid to render cards and printouts a memory of the past has come a long way. Wallet makes handling and storing any type of ticket considerably simpler, which is why it is easy to get irritated today when presented with no other delivery option but an old-school paper pass. Thankfully Apple and other retailers are increasingly swinging towards the digital platform, but there are still countless cases where you just cannot add a ticket or voucher to your Wallet – even though it would make life so much easier.

Pass2U Wallet, a free app for iOS, taps into that need and conveniently bridges the gap. Just like Wallet itself it offers to scan hard copy barcodes in order to convert them to Wallet passes, however contrary to Apple’s Wallet it will practically work with any piece of paper imaginable. As such, Pass2U Wallet complements and enriches the stock Wallet app nicely, making sure you will be able to add anything you like to your iPhone’s Wallet. Find out more about the app in our review below.

If you have made it this far, odds are you do not need to be persuaded as to why you want to be able to add as many prints or cards as possible to your Wallet. Irrespective of what exactly the barcode is attached to – be it a boarding pass, a loyalty card, a voucher or a unicorn – it is almost always better to carry it in digitalized form. That’s in part because they are harder to lose, destroy or quicker to pull out. But sometimes it can also be for more personal reasons, such as wanting to immortalize a ticket from an event special enough to you to permanently store in your Wallet (I can’t be the only person guilty of that).

Pass2U Wallet so far has helped me convert paper boarding passes to Wallet passes (and yes, I successfully boarded the plane) plus add loyalty cards and concert tickets to my Wallet. In other words, if the barcode was readable on paper, it also worked just fine on iPhone.

Creating passes for the Wallet app 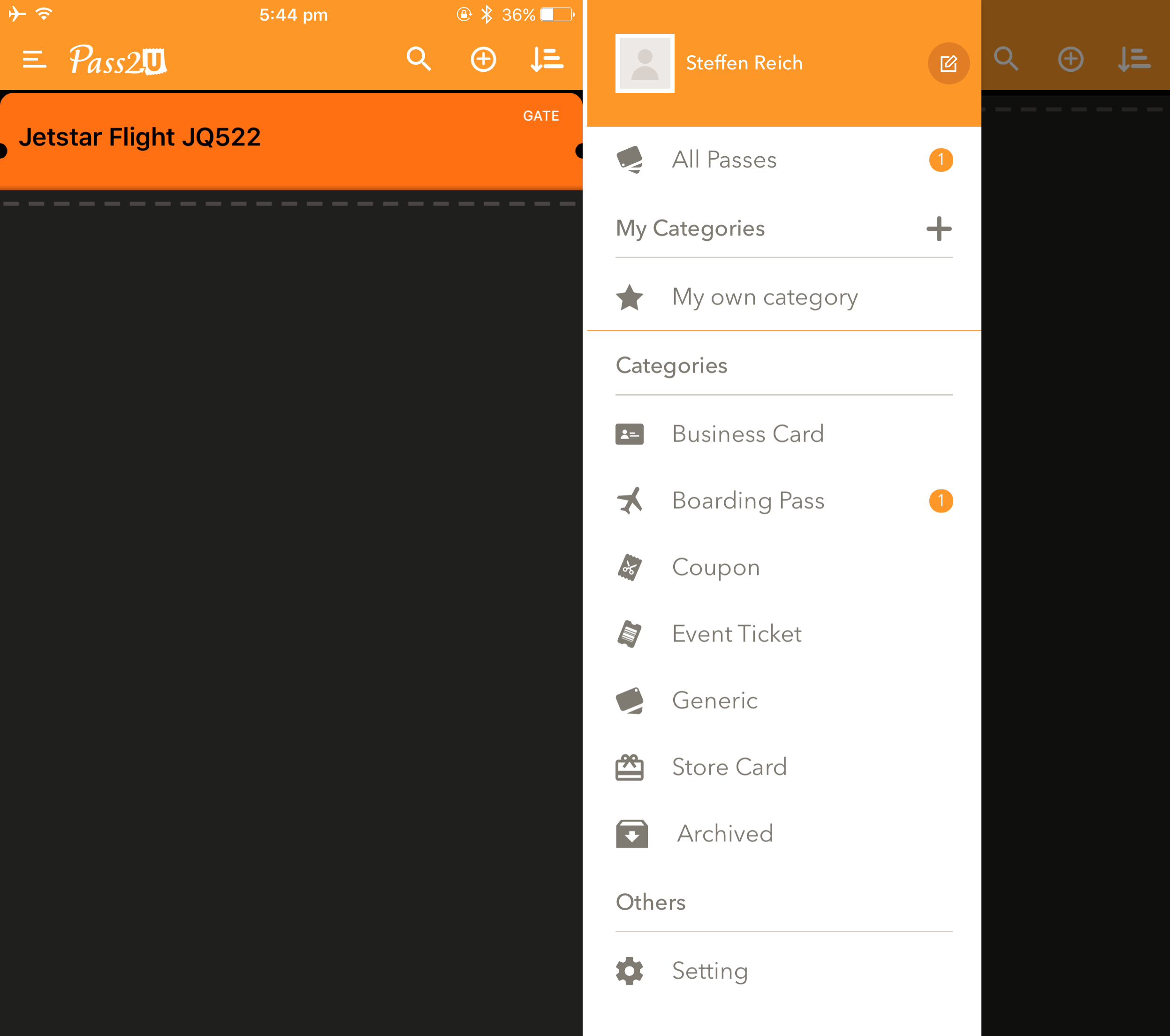 Pass2U Wallet is clean and intuitive, all the while offering a slew of options to add and archive tickets on your iPhone. The app itself mimics the Wallet stock app, offering to file new passes away under either preset or personal categories. In order to do so accurately, the app will ask for a hand in sorting the new additions right after scanning a barcode. The intricacies of this will be elucidated below, yet always keep in mind that Apple’s own Wallet is the endgame and Pass2U Wallet basically the conduit to that. As soon as the pass is created, you are going to want to add it to your Apple Wallet anyways, as that one brings along the really good stuff, such as Lock screen notifications or Apple Watch support.

The actual scanning process is initiated by hitting the plus icon in the top right corner of the app: the now activated camera looks for a barcode and swiftly offers to convert the ticket into digital form. To Pass2U, the format or date of the code does not matter, so whenever Apple’s Wallet scan falters, the third-party app is going to be undeterred. In addition to the here and now camera, it is capable of detecting barcodes featured in old photos saved to your camera roll (very handy!) and also allows for the manual typing of the numerical sequence often found below a QR- or barcode. The comparison below demonstrates how I was able to add a concert ticket to Wallet through Pass2U Wallet when the stock app would not have it. 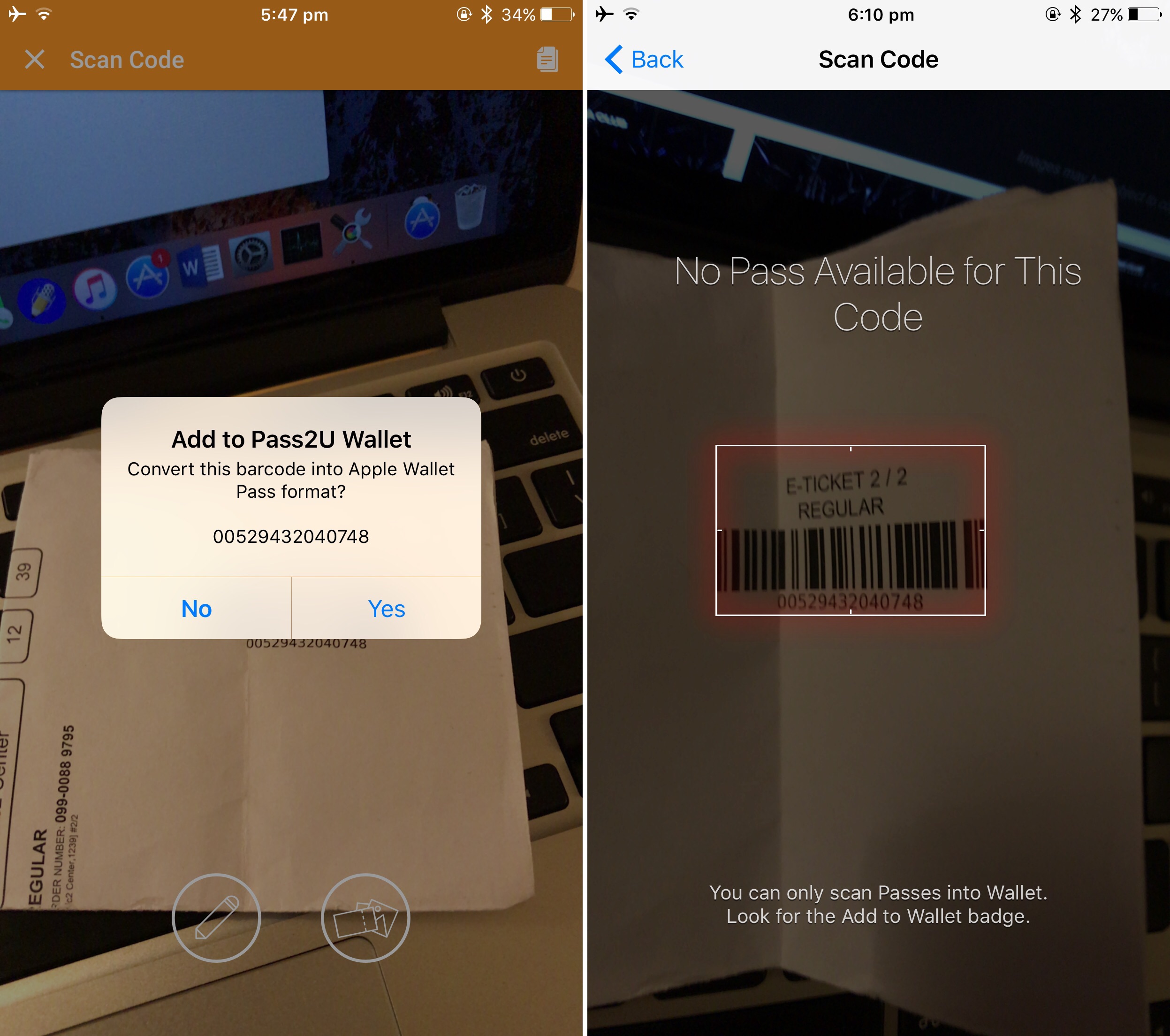 Once the barcode is detected by the app, a follow-up interface will request some data input, the extent of which depends on how much the app could glean from the scan alone. Either way it is a brief task and rather pleasant for those that like to customise their passes: after selecting the type of the scan (boarding pass, coupon, event ticket, store card or a generic template), the possibilities are vast insomuch as you can add logos to the pass, calibrate the colors of it and fill in any remaining blank spaces yourself. Thereafter, all it takes is one tap and your carefully crafted pass is going to pop up, ready to be added to your Apple Wallet. 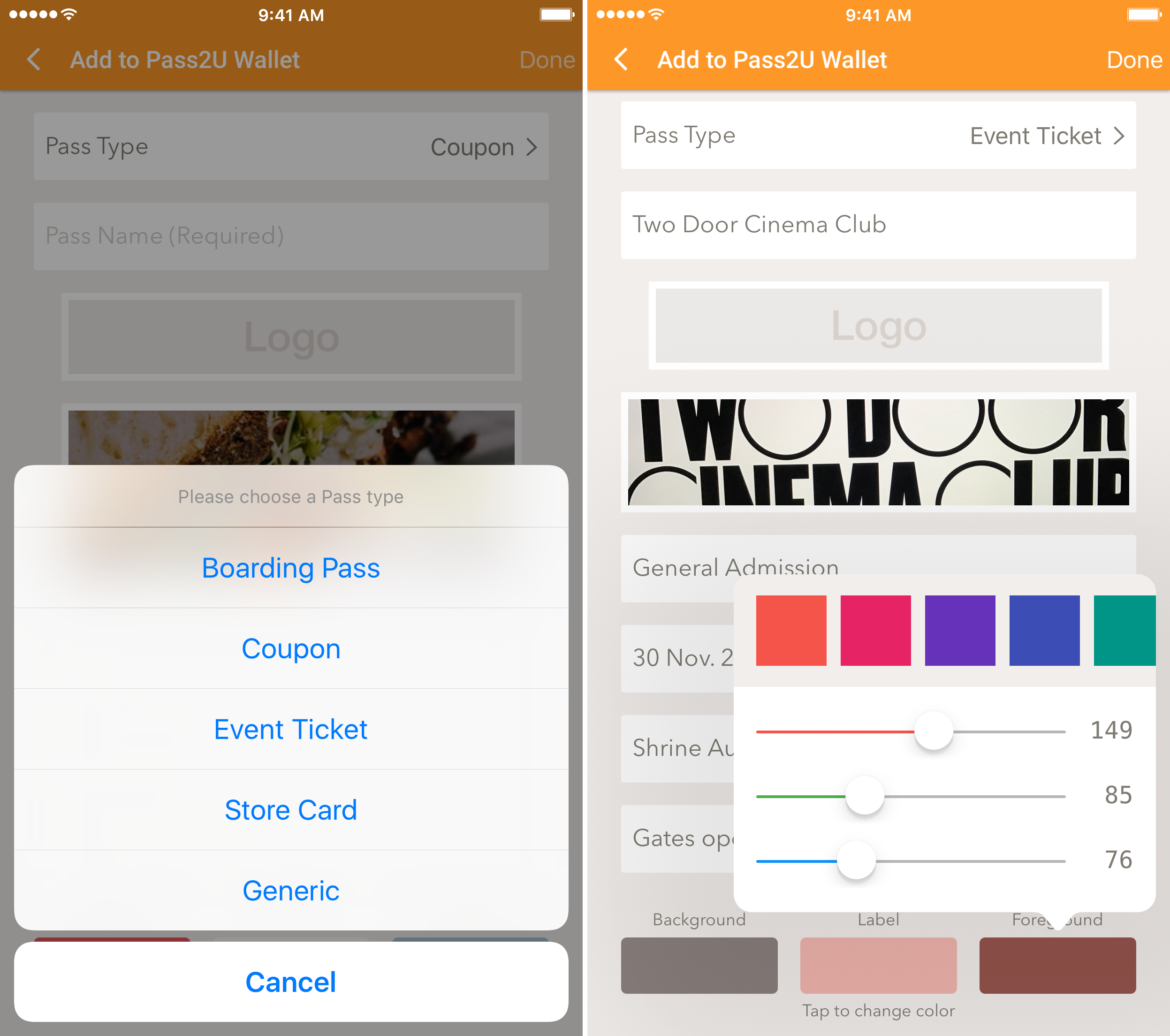 What else do I need to know?

Rather than just pitching a few selling points in this review, the purpose of this walkthrough was to give a fair representation of the overall app experience. To recapitulate, expired events can be added to your Wallet retroactively and barcodes unreadable by Wallet are easily contrivable by Pass2U Wallet. The app also taps into the API for detail view on the back of your pass, which you can fill with any desired content via Pass2U Wallet. Type the words in the detail information bracket and flip over the new pass in Wallet to view it at the bottom (Gate information in the example below). 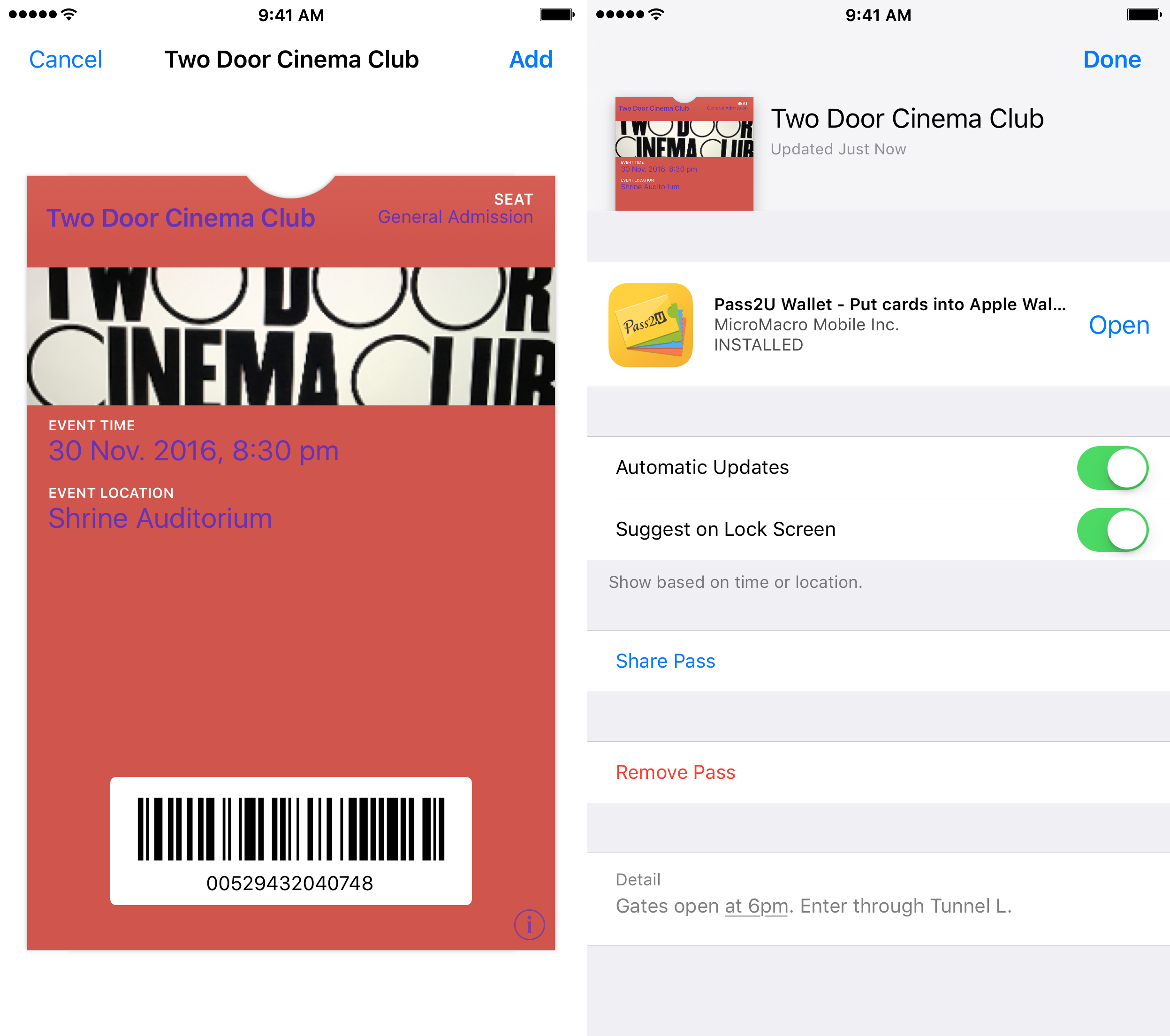 If you are waiting for a major catch, I will unfortunately have to dash your expectations. This is not due to the fact that the review was supposed to strike you as wholly uncritical, but may well be because I have not encountered many deal-breakers in the course of reviewing. With the exception of an arbitrary error message popping up now and then, it’s been a pretty smooth ride. The tenor of the review would perhaps be more throttled if the app cost money, however remember it is available for free. So if you like it, keep it and if you don’t, delete it. On any account, you are well-advised to give it a try.

Pass2U Wallet is compatible with iPhone, iPad and iPod touch and requires iOS 8.2 or later. Find Pass2U Wallet now for free in the App Store.