Taiwan-based iPhone manufacturer Foxconn is said to be considering pouring as much as $7 billion into a massive expansion of its operations in the United States, looking to create 50,000 jobs within the country in the next four years, Reuters reported Wednesday.

Foxconn is reportedly looking to build a collection of U.S.-based assembly plants.

The company has confirmed being in preliminary discussions regarding expansion of its U.S. operations. CNBC earlier posted a slide which pegs the investment at $7 billion.

Foxconn promised more details after its talks with “the relevant U.S. officials” are over.

While the scope of the potential investment has not been determined, we will announce the details of any plans following the completion of direct discussions between our leadership and the relevant US officials.

I do believe that some manufacturing may come back to the United States, primarily because of the fact that president-elect Donald Trump is going to twist Apple’s arm. And there’s been reports that Foxconn is reviewing being able to assemble plants, and it would be a good thing.

Foxconn currently operates manufacturing facilities in the U.S. states of Virginia and Indiana, and has logistics services in California and Texas.

At the same time, another huge Asian firm could invest billions in U.S. companies.

“Billionaire businessman Masayoshi Son, the head of Japan’s SoftBank Group Corp, pledged a $50 billion investment in the United States, and Apple Inc. supplier Foxconn said it was in preliminary discussions to expand its U.S. operations,” reads the report.

Son did not give a timeline for the investment. 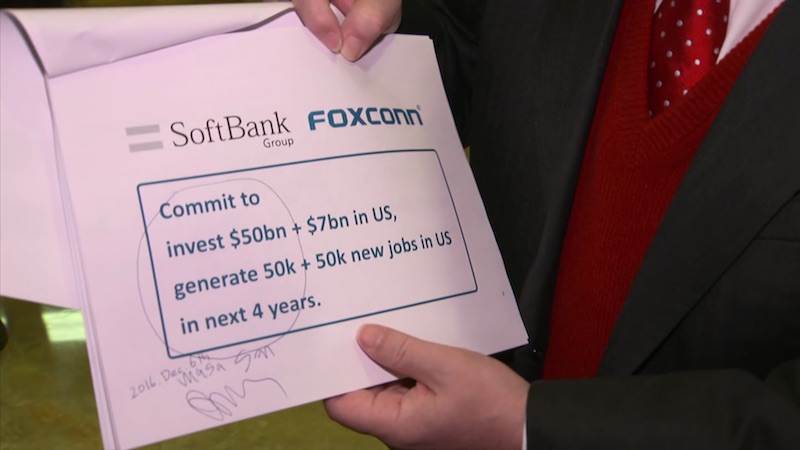 Son and Foxconn founder Terry Gou have some business ventures together: they launched Foxconn-built humanoid Pepper and invested jointly in India.

After U.S. President-elect Donald Trump repeatedly pledged to bring manufacturing and other overseas jobs back home, Nikkei reported that iPhone manufacturers Foxconn and Pegatron were both approached by Apple regarding the possibility of establishing iPhone manufactories in the United States.