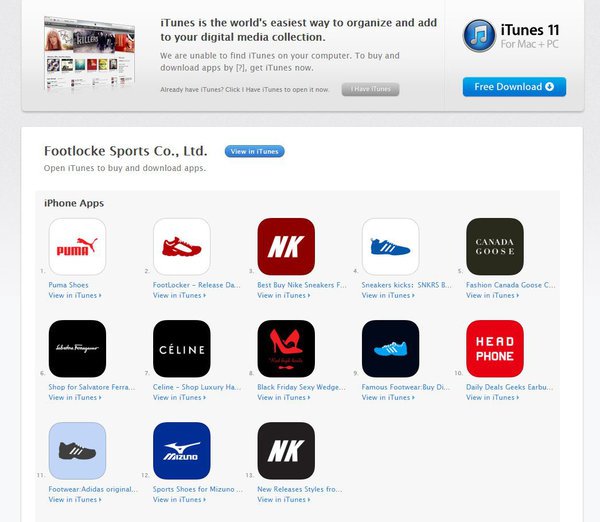 Fake apps that pretend to be from well-known brands have been an incredibly annoying issue for almost as long as the App Store has existed. Like clockwork, apps that spoof big brands manage to make their way into the App Store ahead of a pre-holiday surge and this year’s no different.

As The New York Times reports, rogue app factories in China have been busy churning out counterfeit shopping apps by the hundreds, with one particular developer being responsible for an avalanche of fake apps for brands like Puma, Nike, Canada Goose, Celine and others.

Beware these apps as they’re scams designed to fool you into providing your passwords and credit card data. Thankfully, Apple is clamping down on the latest round of fake apps as the Great App Store Purge continues unabated.

A good example is the shoe retailer Foot Locker Inc. which has three iPhone apps on the App Store.

The legitimate company now has to contend with a Chinese development firm that goes by the name Footlocke Sports Co., Ltd. and is behind more than two dozen shoe and clothing apps that look like the real thing, except they’re not. All these rogue apps want is suck your credit card numbers into the cloud.

The counterfeiters have masqueraded as retail chains like Dollar Tree and Foot Locker, big department stores like Dillard’s and Nordstrom, online product bazaars like Zappos.com and Polyvore and luxury-goods makers like Jimmy Choo, Christian Dior and Salvatore Ferragamo.

But clamping down on these fakes is easier said than done because their creators aren’t stupid and seem to always find a way to fool Apple’s reviewers.

Despite Apple’s efforts, new fake apps appear every day. In some cases, developers change the content of an app after it has been approved by Apple’s monitors. In other instances, the counterfeiters change their names and credentials, and resubmit similar apps after one round of fakes is discovered.

Members of the App Store review teams simply don’t have the time to examine each and every of the thousands of apps submitted every day just to check if they are legitimately associated with the brand names listed on them. I ca sympathize with Apple here, but still think it should do more to prevent fakes in the App Store.

Counterfeit apps that spoof real brands hurt Apple, loyal consumers, legitimate app makers trying to make a living and ultimately said brands, too On the other hand, Apple does move swiftly once a brand or an actual end-user reports fakes.

We strive to offer customers the best experience possible, and we take their security very seriously. We’ve set up ways for customers and developers to flag fraudulent or suspicious apps, which we promptly investigate to ensure the App Store is safe and secure. We’ve removed these offending apps and will continue to be vigilant about looking for apps that might put our users at risk.

With more than two million iPhone, iPad and iPod touch apps available in the App Store, it’s impossible to pinpoint when Apple might finish clearing out the App Store of abandoned or rarely updated apps and those that don’t follow the current review guidelines, but the sooner the better.

According to the paper, Apple has confirmed that a significant number of apps have been removed and that the review is continuing.

If you rely on retail apps for your holiday shopping needs, be sure to use official apps from trusted developers and—please—don’t let apps with names resembling known brands/developers deceive you just because they have carefully designed icons, screenshots and interfaces that mimic established brands.