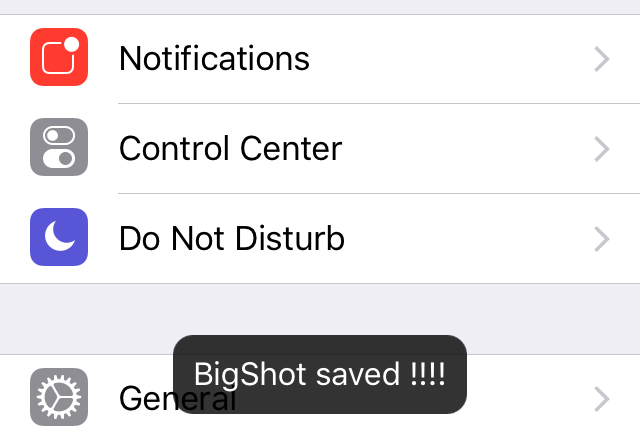 Without a doubt, sometimes taking a screenshot on your iPhone requires multiple screenshots that you have to stitch together to combine into a single screenshot. As a reviewer, this is something that I run into constantly when taking screenshots of settings for tweaks, and many other situations.

A new free jailbreak tweak called BigShotJb aims to make this process easier by allowing you to take long screenshots of scrolling interfaces, such as message conversations or Settings preference panes. We’ll show you more about it in this review.

When you need those long screenshots and don’t feel like spending the time to stitch multiple screenshots into one, BigShotJb comes in handy.

There are apps in the App Store, like LongScreen, that make this process easier than transferring all the screenshots to your computer and then stitching them together in photo manipulation apps like Photoshop or Pixelmator, but still, it requires effort before you have a full long screenshot.

That’s where BigShotJb shines. It requires no effort. When you use the tweak, a screenshot of the full scrolling UI is saved to your Photos app instantaneously.

Here’s a rather hyperbolic example:

How to use the tweak

You might think using something like this would have to be difficult. On the other hand, it’s actually very easy.

On devices with less memory, I have found that the tweak sometimes goofs and doesn’t load all the images. One such example is the Settings app above, in which the icons for News, iBooks, Podcasts, and Pokémon GO are all missing, but the others loaded just fine.

You’ll also notice that at the bottom of every screenshot you take with this tweak, you will have some slight cut-off, but it’s not a lot.

You can expect minor bugs with the current version of this tweak, but it doesn’t seem like it’s anything major. The tweak works best in UIWindow frames, and doesn’t seem to work that great for websites in Safari, so keep this in mind.

Since I take screenshots like this all the time, I think BigShotJb is going to come in handy for many future needs of mine to come. On the other hand, I’ll probably end up waiting until some of the smaller bugs are squashed first.

The tweak is available for free right now in Cydia’s BigBoss repository from your jailbroken device if you’re interested in giving it a try. There are no options to configure.

Would you use BigShotJb? Let us know in the comments below!