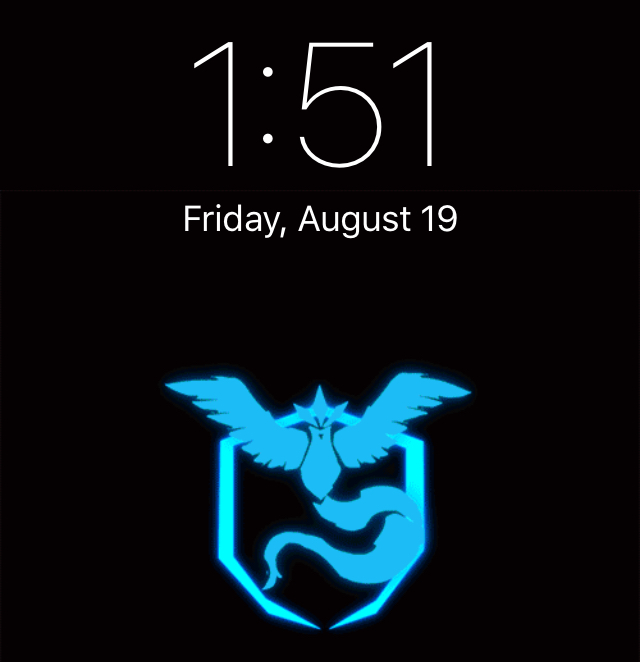 Are you a Pokémon GO fan and looking for a fun new way to spice up your jailbroken iPhone?

If so, don’t skip out on downloading an awesome new free jailbreak tweak dubbed PokeGo LS Gif, which adds a Pokémon GO team-based GIF animation to your Lock screen as your wallpaper for your viewing pleasure.

Show off your Pokemon GO spirit

After you install PokeGO LS Gif, your Lock screen wallpaper is replaced with a background and an animated GIF in the center that alternates between the three legendary team birds. Those are Mystic (blue) -> Articuno, Valor (red) -> Moltres, and Instinct (yellow) -> Zapdos.

A quick demonstration of the rather high-quality animation that occurs as the birds alternate can be seen in the following GIF:

What’s more is the Lock screen stays lit up just long enough for all three birds to be displayed, and then it pleasantly goes back to sleep to conserve power.

The developers note that PokeGO LS Gif only works in portrait orientation (not landscape orientation) with iPhones with displays larger than 3.5 inches, so that means no love for the iPhone 4 or iPhone 4s. It also works on the iPad, but it’s a bit buggy on it when compared to the iPhone and iPod touch.

Additionally, the tweak works with iOS versions from iOS 7.1.x through to iOS 9.3.x, which means even your older devices can have this tweak installed on them.

My thoughts on PokeGO LS Gif

It could just be me nerding out on this one, and that’s probably very likely the case, but I really like this tweak because I’ve been having so much fun playing Pokémon GO that it seems to fit my current mood and tastes. Of course, that’s a really big aspect of this tweak; you need to be a Pokémon fan to even like it in the first place.

Because Pokémon GO has taken off in popularity since launching in the App Store, that’s probably not a problem for most of you, but if you don’t like Pokémon, and I’m sure there are some out there who don’t, you will probably want to pass on this tweak.

But my opinion stands that if you like Pokémon, this is a really cute tweak to install because it adds a touch of customization to your device that shows off your personality and interest in the game.

I also think it’s fair to mention that the animations are very nicely done and are as smooth as a warm knife sliding through room-temperature butter. The GIF above, which I had to render with my own software, really doesn’t do this tweak justice.

If you’re a Pokémon GO fan, PokeGO LS Gif is an aesthetically-pleasing jailbreak tweak to install on your device to give your Lock screen some character. It works with a large array of iPhones and iPod touches and, overall, it looks really nice.

If you’re a Pokémon GO player, what are your thoughts on this tweak? Share with us in the comments below!