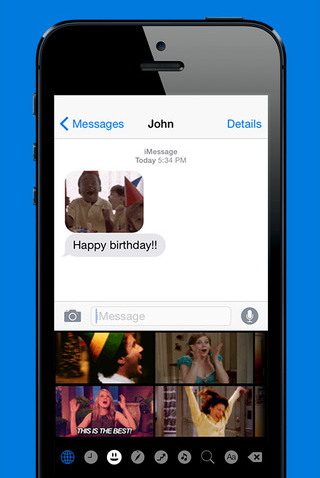 There are a lot of people out there who love using GIF images as a way of expressing their feelings, and it would seem that jailbreak developer Ryan Petrich is no different.

With a new beta jailbreak tweak release he’s calling AutoPaste, he aims to make sharing GIF images in your favorite messaging apps with third-party GIF keyboards from the App Store faster and easier than before.

AutoPaste essentially eliminates the need to tap and hold on the text field and tap on the Paste button after you copy a GIF from your favorite GIF keyboard from the App Store.

Petrich says that the tweak works with just about any GIF keyboard in the App Store, but in this review, we’re using the GIF Keyboard by Tenor, Inc. specifically, as it seems to be most popular.

Just to better demonstrate how the tweak works, we’ll start with explaining what you had to do before you installed AutoPaste.

After you install AutoPaste, however, the process of having to tap and hold in the text field to show the Paste button is completely removed from the equation.

Now, all you have to do is choose a GIF, and it will be automatically placed in the text field for you because it’s pasted into the text field as soon as you copy it.

With fewer steps, it’s a bit faster and more convenient:

As a big GIF keyboard user myself, I can see where this tweak comes in handy by speeding up the process to send a GIF to someone. It eliminates an unnecessary process that seems tedious to many people, but it doesn’t go as far as automatically sending the image on you, which would be bad if you tapped on the wrong one by mistake.

With that in mind, I think AutoPaste is an improvement to the stock handling of GIFs in any of the GIF keyboard apps from the App Store, especially the one we’ve shown you in this post.

Would I recommend it to you? Absolutely, but only if you use GIF keyboards. This tweak does not work for auto-pasting GIFs that you’ve copied from other sources, such as Safari. This is an important caveat, because this is what I thought it did from the get-go. It wasn’t until I talked to Petrich directly that he pointed me into the direction of trying the tweak with a keyboard.

It goes without saying that I was subtly surprised with the function and I have to say I like it. Another winner from Mr. Petrich!

AutoPaste isn’t yet available on any of Cydia’s default repositories. Instead, it’s available on Ryan Petrich’s beta repository in Cydia, which you can add by adding the following repository URL to Cydia:

Once added, the tweak should show up in your Changes tab in Cydia. If it doesn’t you may need to refresh your sources and then search for it.

AutoPaste is a great new way to speed up the sending of GIF images with GIF keyboard apps in iOS. It’s available for jailbroken devices for free from Ryan Petrich’s own repository. Keep in mind that you need to have a GIF keyboard app installed from the App Store to use this tweak.

There are no options to configure and the tweak starts to work as soon as you install it.

What are your thoughts on eliminating the step of pasting the GIF into the text field? Share in the comments!