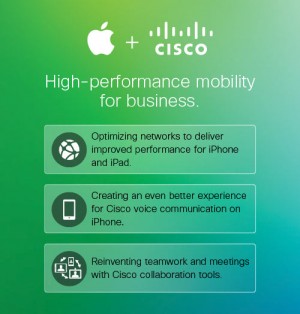 The New York Times article headlined “Once Taunted by Steve Jobs, Companies Are Now Big Customers of Apple” contains an interesting side-note which claims that network giant Cisco is currently testing an upcoming software “that gives priority to mobile devices or apps” ahead of its unveiling next month.

The forthcoming software solution is clearly born out of a partnership that Apple and Cisco struck last year to optimize iOS devices and apps for enterprise users.

Announced in August 2015, the deal creates “a fast lane” for corporate users by optimizing Cisco networks for iOS devices and apps, integrating the iPhone with Cisco enterprise environments and providing “unique collaboration” on the iPhone and iPad.

“To address the ever-increasing demands on corporate infrastructure, Cisco networks and iOS devices will be optimized so that they work together more efficiently and reliably with the goal of providing users with even greater performance,” wrote Apple and IBM at the time.

The upcoming Cisco software could include iOS-optimized versions of Cisco’s collaboration tools such as Cisco Spark, Cisco Telepresence and Cisco WebEx. Given the new Cisco software is due alongside iOS 10 next month, it’s actually possible that the article refers to iOS 10 itself.

It’s entirely possible that iOS 10 may include optimizations to make the iPhone “an even better business collaboration tool in Cisco voice and video environments, with the goal of providing employees with a seamless experience between iPhone and their desk phone,“ as stated in the original press release announcing the partnership a year ago.

In addition to the Cisco partnership, Apple teamed up with IBM two years ago on a major enterprise mobility partnership and about three months ago announced a deal with German business software maker SAP to build apps that connect to the SAP back-end software used by many large enterprises for inventory, sales, human resources and other corporate tasks.

According to the latest Forrester research, nearly half of all iPads are now being bought by corporations and governments. Nearly every Fortune 500 and Global 500 company today trusts iOS for its mobile strategy and 95 percent of Fortune 500 corporations use Cisco Collaboration and Cisco networks to conduct their business.