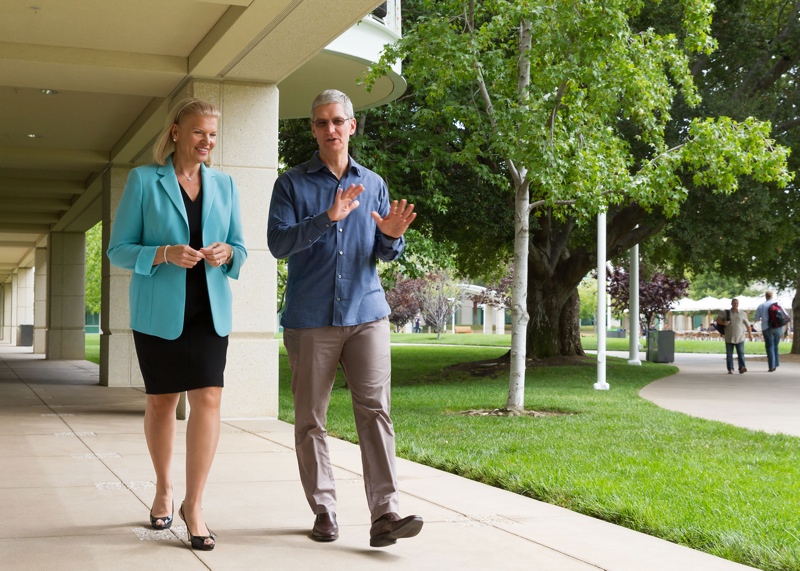 Apple and IBM announced this afternoon that the two tech giants have entered an exclusive partnership to “transform enterprise mobility.” The pair will utilize the market-leading strengths of each company to bring about a whole new class of business apps to iPhone and iPad.

These apps will be for a variety of fields, including retail, healthcare, banking and travel, with some of the software becoming available by the end of the year. IBM is also working on a new ‘MobileFirst Platform for iOS,’ will be an end-to-end enterprise solution for iOS devices…

Here’s more on the new partnership from Apple’s press release:

– a new class of more than 100 industry-specific enterprise solutions including native apps, developed exclusively from the ground up, for iPhone and iPad;
– unique IBM cloud services optimized for iOS, including device management, security, analytics and mobile integration;
– new AppleCare® service and support offering tailored to the needs of the enterprise;  and
– new packaged offerings from IBM for device activation, supply and management.

While the deal might sound odd at first, it starts to make sense when you think about what it marries. IBM is of course known for its big data and analytics capabilities, and Apple is an expert in integrating software and hardware. It seems like the two sides would make a great team here.

As part of the exclusive IBM MobileFirst for iOS agreement, Apple says that IBM will also begin selling iPhones and iPads with the industry-specific solutions to business clients worldwide. There’s no launch date for that initiative, but if it aligns with the software, it could begin later this year.

Here’s IBM CEO Ginni Rometty on what the deal with Apple means:

“Mobility—combined with the phenomena of data and cloud—is transforming business and our industry in historic ways, allowing people to re-imagine work, industries and professions,” said Ginni Rometty, IBM Chairman, President and CEO. “This alliance with Apple will build on our momentum in bringing these innovations to our clients globally, and leverages IBM’s leadership in analytics, cloud, software and services. We are delighted to be teaming with Apple, whose innovations have transformed our lives in ways we take for granted, but can’t imagine living without. Our alliance will bring the same kind of transformation to the way people work, industries operate and companies perform.”

And here’s Tim Cook’s memo to Apple employees on the deal (via 9to5Mac):

Today, we announced a groundbreaking new partnership with IBM that will enable enterprises to put the power of big data analytics at their employees‘ fingertips on their iOS device. This exclusive global partnership brings together Apple‘s legendary ease-of-use and integrated hardware and software with IBM’s unmatched industry depth, enterprise software and expertise in big data analytics.

It also builds on the incredible momentum in Apple’s enterprise business. iPhone and iPad can be found in 98% of the Fortune 500. People love to use iOS devices and Apple delivers the things companies need most—security and scalable deployment along with a powerful platform for apps. With this announcement, we’re now putting IBM‘s renowned big data analytics at iOS users‘ fingertips, which opens up a large market opportunity for Apple. This is a radical step for enterprise and something only Apple and IBM can deliver.

IBM is known for helping customers leverage big data and analytics to make their businesses run better. With over 100,000 consultants and sales professionals, they also have massive scale and global reach. IBM‘s sales and consulting teams will also be selling iPad, iPhone and AppleCare for Enterprise as part of the partnership.

This partnership brings together the best of both companies. It’s great news for Apple, IBM and for enterprise customers worldwide and I’m really excited to see it take off.

This is a huge coup for Apple, who has long shown significant interest in the enterprise market. And with BlackBerry still struggling, and Android’s security constantly being drawn into question, there has been, perhaps, no better time to announce something like this than right now.

What are your thoughts on the new partnership?