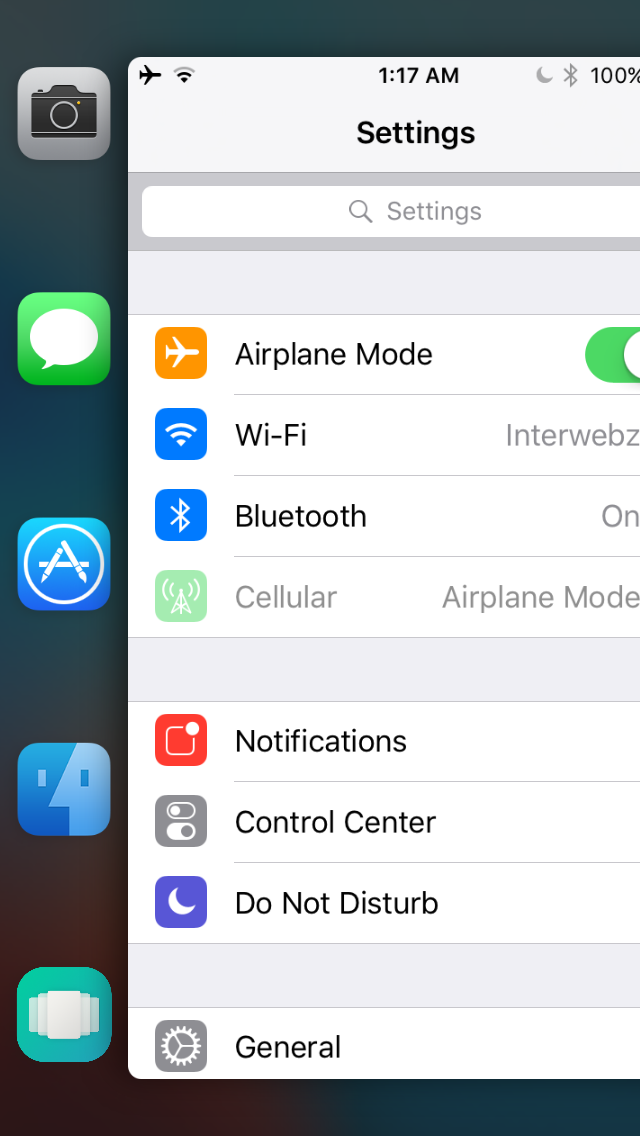 Getting to your recently-used and favorite applications quickly is an invaluable ability that can make using your device easier.

Snakebite was a great jailbreak tweak that allowed you to do just that on jailbroken iOS devices, and now Snakebite 2 for iOS 9 is available in Cydia.

Where attention to detail matters

Although Apple’s stock App Switcher makes quick work of getting to your recently-used apps, it still leaves a big empty area for your favorite apps. Snakebite 2 takes care of this problem by allowing you to use the interface for both.

On 3D Touch-enabled devices, you can use a 3D Touch and drag gesture from the left side of the screen to reveal a hidden tray that displays either your recently-used apps or favorite apps (depending on how you have the tweak configured.

Going a step further, the tweak also works with non-3D Touch devices, although you have to tap on the left side of the screen, then release, and then drag, which opens the same interface, although the gesture isn’t as pretty as it is on 3D Touch devices.

After you get the tray opened up, the app icons are evenly spread out and spacing is adjusted automatically based on how many apps you have in it. You can then drag up and down with your finger while it’s still on the screen to move between apps, and when you release your finger on an app, that app gets launched. 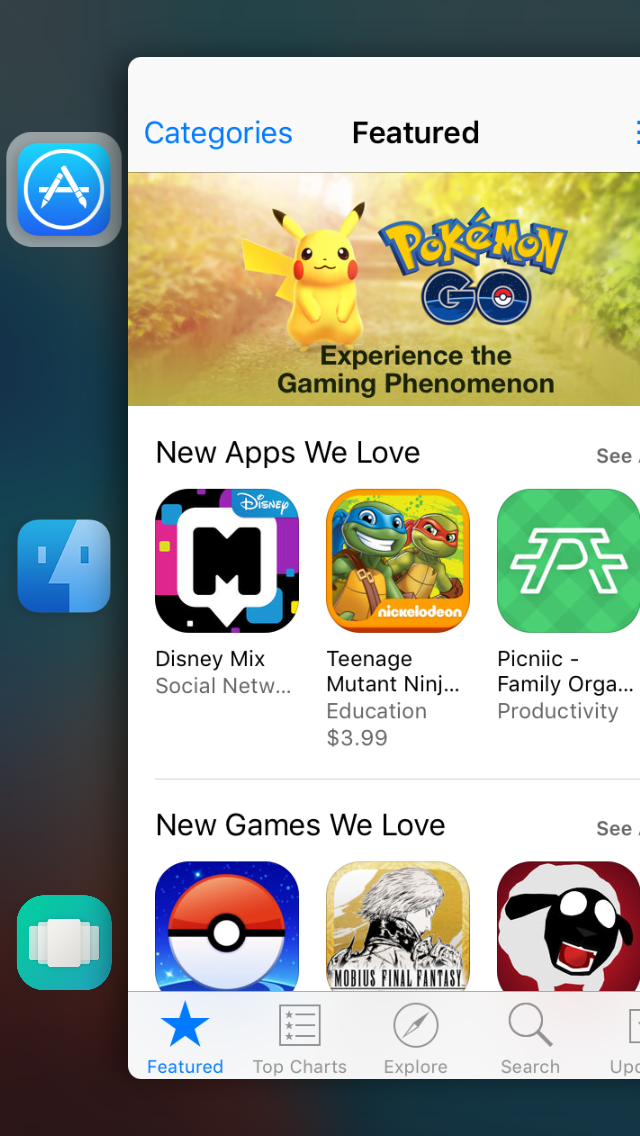 As you can see above, when an app is selected, a gray box surrounds the app icon.

The tweak will add a preferences pane to the Settings app, and from there, you will be able to change a few settings around to your liking. 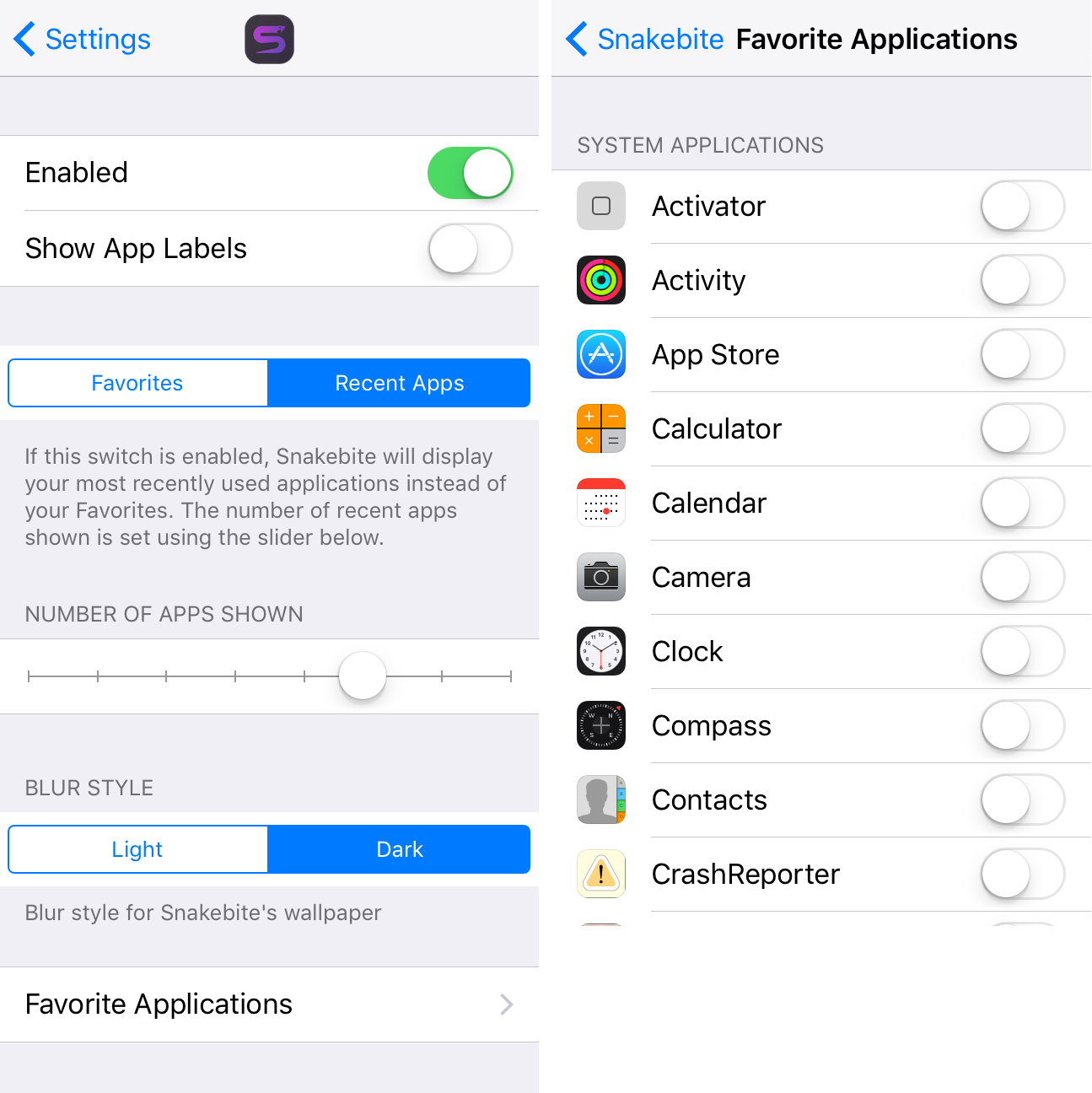 Among the things you’ll be able to configure here are:

The application list is populated by the AppList extension from Cydia, so do keep in mind that this dependency will be installed along with Snakebite 2 if it isn’t already on your device.

My thoughts on Snakebite 2

I really like the interface of Snakebite 2 and I love the well-thought-out animations and implementation. This is a tweak that was clearly designed for 3D Touch devices first and non-3D Touch devices second, so as you might expect, it’s a little easier to work with on 3D Touch devices than those that don’t have it.

Nevertheless, the ability to get to your favorite apps easily is well worth the installation, even if you already use the current App Switcher to get to your recently-used apps.

I really like that the tweak is open-sourced on Github, as the developer of the tweak really seems into the idea of teaching the rest of the jailbreak community about iOS and inspiring more developers to code great things for the jailbreak.

Would I recommend it? Only if you have a need for a list of “favorite” apps that you can launch from anywhere. I think that the recently-used apps functionality of the tweak can already be found in a stock installation of iOS, but if you like the idea of having favorite apps or even enjoy the layout of the tweak and its customization features, then you should go ahead and give it a shot.

Snakebite 2 is a great way to get to not only your recently-used apps in iOS, but also your favorites. Keep in mind you have to choose one or the other at a time; you won’t have access to both in the same interface.

The tweak can be had from Cydia’s BigBoss repository right now for $1.49, and if you own the original Snakebite tweak, then Snakebite 2 is going to be a free download because you get a complimentary free upgrade for supporting the developer in the past.

What are your thoughts on Snakebite 2? Will you install it on your jailbroken device? Share in the comments below!