With the new Pangu jailbreak for iOS 9.3.3 finally having been out long enough that Saurik enabled tweak purchases in Cydia, new jailbreak tweaks are starting to come out of the wood works.

Two new jailbreak tweaks that try to accomplish similar goals are Canite and TinyPlayer Pro, each of which are new mini players for iOS that hover over any interface that you might be in.

Which is the better mini player?

To be 100% honest, I’ve reviewed countless mini player jailbreak tweaks; so many, in fact, that I couldn’t even begin to remember the names of all of them. On the other hand, iOS developers are always persistent that they can create a bigger and better mini player than what Cydia already has to offer, so the market for his particular niche continues to grow.

Because I don’t particularly use mini players on my jailbroken devices, they all seem the same to me, except for the differences in the bells and whistles they all have to offer. Of course, there’s also the reality that some look better than others and that some developers are always working harder than others to add new features to them, which impacts the price differences between them.

Canite and TinyPlayer Pro are both new tweaks that attempt to accomplish the same goal, and it made more sense in my mind to create a type of comparison post rather than individual reviews for two tweaks that essentially do similar things. So that’s exactly what we’ll be doing. At the end of this comparison review, you should have the information you need to decide which one is the better value for your buck, as both are paid tweaks.

Canite is a simpler solution for those who want an easier-to-configure mini player interface. I think that this tweak appeals to those who don’t want too many options to configure because having too many settings to adjust before using the tweak can be intimidating for users who don’t want to spend too much time changing settings out of the box just to dislike the end result.

With Canite, you get a floating interface with what appears to be an opaque background. There are also other blur and color options available, but we’ll get into that later.

The main interface shows the album artwork, the name of the album, and the music controls for going backward, forward, and playing or pausing your music. At the top, you can see a progress bar that shows where you’re at in the song, and at the bottom is a volume slider so you can change how loud the song is playing.

Canite even adds a preferences pane to the Settings app after installation where you can configure the tweak to your liking: 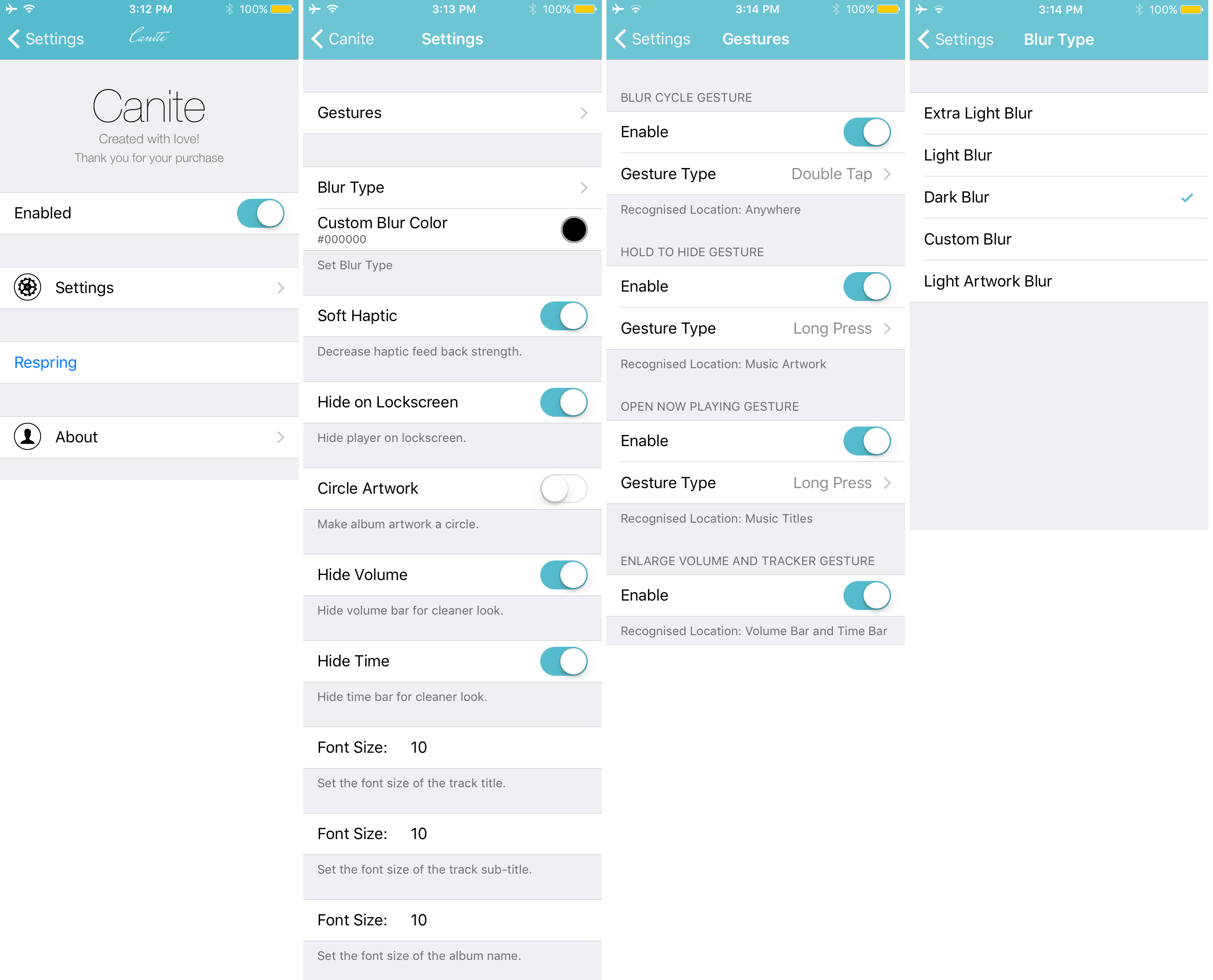 From the main page, you can enable or disable the tweak on demand and access the tweak’s settings.

The settings aren’t overly-extensive, so we’ll outline them for you quickly below:

You’re definitely going to want to set up your hide gesture because having an interface floating over your screen all the time can certainly get in the way. Most of the other options, apart from the gestures, only pertain to aesthetics rather than functionality.

Canite is available in Cydia’s BigBoss repository for $1.50. The tweak seems to work with not only Apple’s stock music app, but also with third-party ones like Spotify. It also works well with the new Pangu jailbreak for iOS 9.3.3.

TinyPlayer Pro is another mini player tweak, and I personally think TinyPlayer Pro has a lot more options to configure. While this won’t particularly appeal to those who don’t feel like having to flip a bunch of switches, select their own colors, and choose a bunch of their own options out of the box, it will appeal to everyone who likes to tinker. 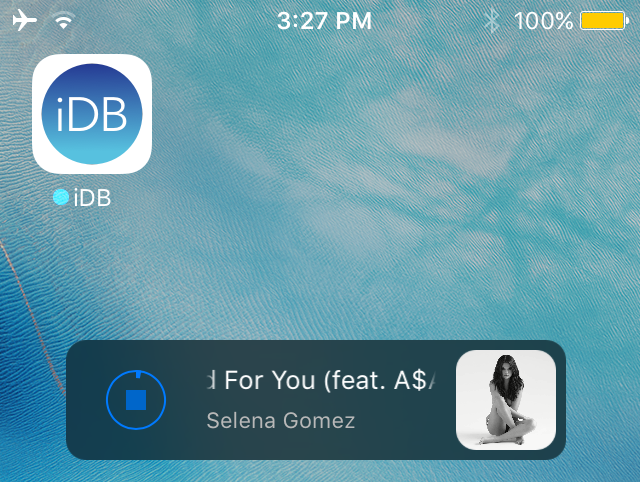 TinyPlayer Pro is much smaller and compact than Canite, and I think I prefer the way it looks over Canite. It’s not as clumped together, and the minimalist interface shows nothing more than the album artwork, the name of the song, the name of the artist, and an iTunes-style progress bar that you can tap on to play or stop the music.

I also think you’ll find that the options have a lot more to tinker with as well. The tweak will add a preferences pane to the Settings app where you can play around with the settings: 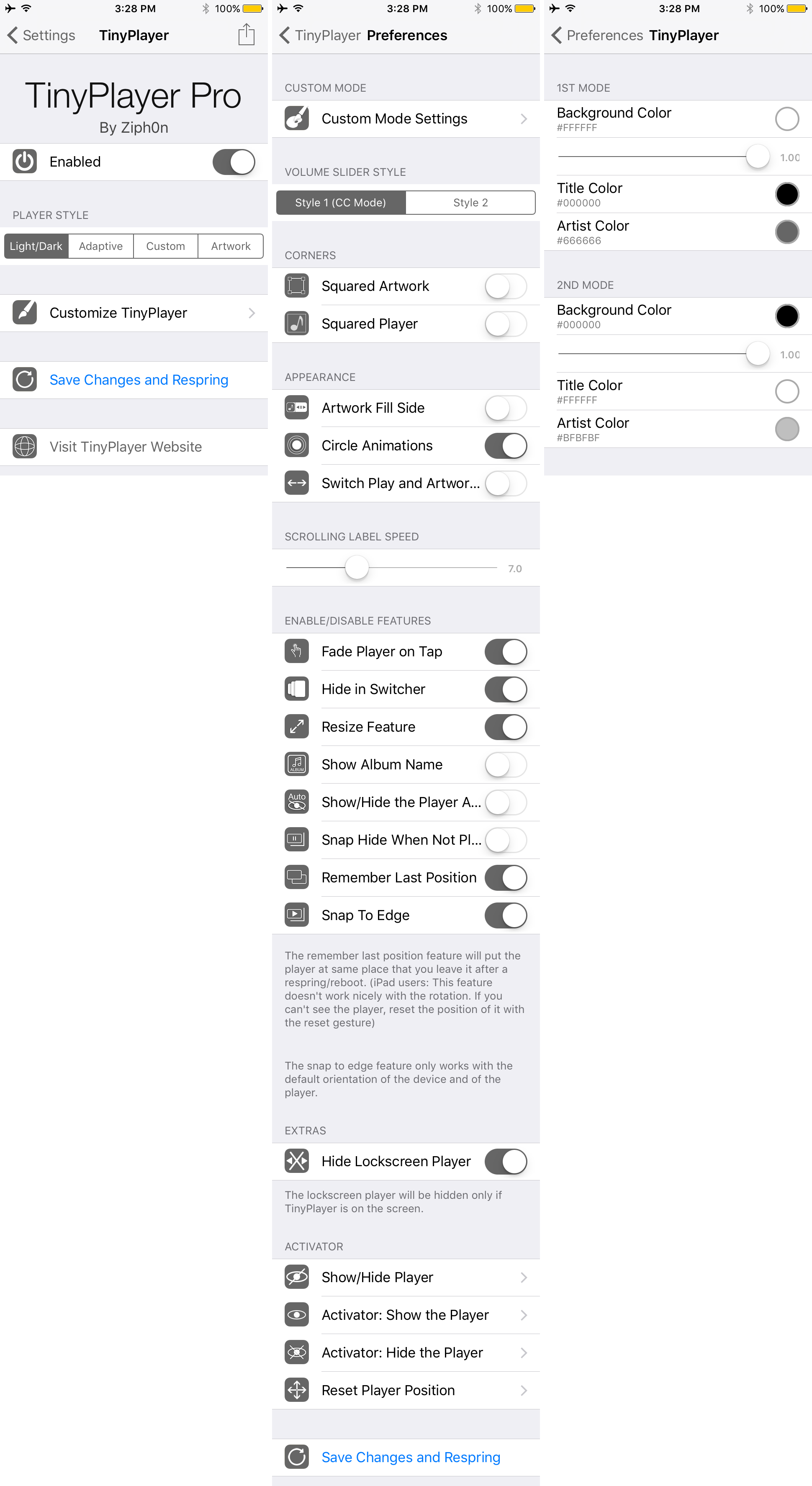 From the main page, you can do your typical configuration like enabling or disabling the tweak, choosing the style for the widget, entering the more immersive configuration, and respringing your device to save your changes.

When you get into the meat and potatoes of the settings, this is where things start to get a little more intense. Among the options you’ll find here are:

The out-of-the-box look for this tweak is certainly nice and clean, but I will have to say that modifying it to extremes with the preferences that are provided may yield you with either desirable or undesirable effects. At the end of the day, the aesthetics come down to your own personal tastes and the end result comes down to your level of creativity.

But that’s just the aesthetics, there are a lot more functional settings to this tweak as well.

TinyPlayer Pro is $1.99 in Cydia’s BigBoss repository and works on all iOS 9 devices, including iOS 9.3.3.

Synopsis, which is better?

I think TinyPlayer Pro certainly has a lot more functional options to configure, especially with the Activator options and the additional options for hiding and showing interfaces, which means you might get a more desired usability result with TinyPlayer Pro than Canite.

If I had to pick between the two, I think I’d have to go with TinyPlayer Pro just because I like how it looks out of the box more and because I’m not really much on spending a lot of time configuring a tweak to such custom extents. It means a lot to me when a tweak looks good out of the box.

On the other hand, I also like Canite because it’s simpler. For just $0.50 more, you get a lot more functional options with TinyPlayer Pro, but I will say that those who don’t like having a ton of options to configure (like myself) and want a tweak that takes care of most of the configuration out of the box will prefer Canite.

Both are great and perform the same task very well, providing music interface controls from anywhere in iOS that you’d like, and both are easily dismissed at any time when you don’t want to look at them. Because they do essentially the same thing, it comes down to which appearance style you like better at the end of the day.

Both Canite and TinyPlayer Pro are great new options for the mini player craze that lets you control your Music without even being in the Music app. At nearly the same price, both pack the same core functionality, but the more expensive one has more options to configure.

At the end of the day, both are solid jailbreak tweaks, and you’ll have to decide between the two on your own based on your own needs.

What are your thoughts on the two tweaks? Which do you like better? Share in the comments below!