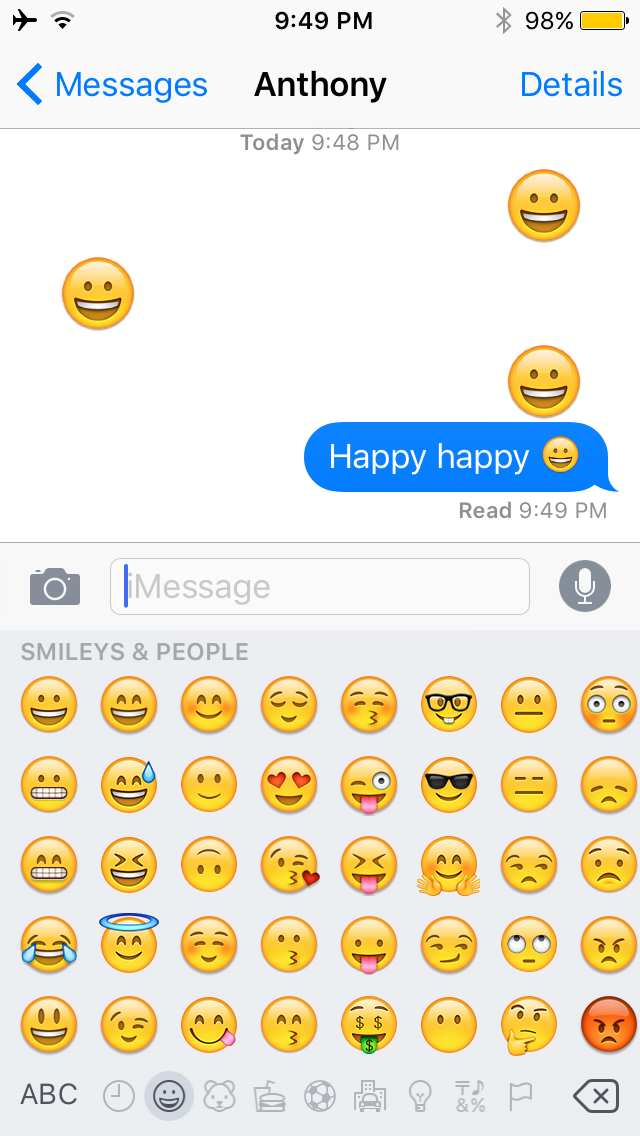 One of the newer features that you can expect in iOS 10 this Fall is the ability to send larger Emojis to the people you’re talking to.

If you’re jailbroken on iOS 9, and you don’t feel like waiting for iOS 10, you can get a similar feature on your device right now, compliments of a new jailbreak tweak from Ryan Petrich called Emojiant.

Emojiant is an exact replica of the larger Emojis you can send in iOS 10, as it does allow you to send larger Emojis when they’re the only focus of your iMessage.

As shown above, if you’re sending just an Emoji as a message, or a group of Emojis without any text, your Emojis will be sent in a fashion much larger than usual.

On the other hand, when you send a message with both text and Emoji, the Emoji is sent in a regular size that matches the surrounding text, as this helps with readability.

How it works with others

If your recipient has iOS 10, and you send them lone Emojis, they’re going to see larger Emojis regardless of whether you have this tweak installed or not.

On the other hand, if you’re using an iOS 9 device, and your recipient has an iOS 10 device, the Emojis they send to you are still going to appear small for you.

With Emojiant installed, everything changes. The Emojis they send to you will appear big just like the ones you’re sending, so the tweak works not just when you send Emojis, but when you receive them too.

Unfortunately, if the person you’re iMessaging has iOS 9 installed on their device, and you have this tweak installed on yours, they’re not going to see the larger Emojis that you’re sending; only you will see them. Their screen will display the typical-sized Emojis instead.

With that being said, Emojiant is a tweak that makes only local changes to your device; in other words, it doesn’t change anything for anyone except for you. This is something to keep in mind, as you really can’t show off this iOS 10 feature to anyone unless they’re sitting right beside you.

How to get it

Emojiant isn’t available on one of the default Cydia repositories. Instead, you need to add Ryan Petrich’s beta repository, which is done by adding the URL below to Cydia:

Once you do, you can search Cydia for Emojiant and install it to start using it.

Emojiant doesn’t have any options to configure. Once you install it, your Emojis will still be sent and received in a larger fashion than usual, so long as they have been sent without any text. Just to mention one more time, Emojis that are sent with text are going to appear in their normal size, just like it works in iOS 10.

If you’re interested in tweaking your newly-jailbroken iOS 9.3.3 device to look and behave more like an iOS 10 device, you should definitely check out Emojiant. After all, it’s free, and if you don’t like it, you can simply uninstall it.

What are your thoughts on Emojiant? Share in the comments below!