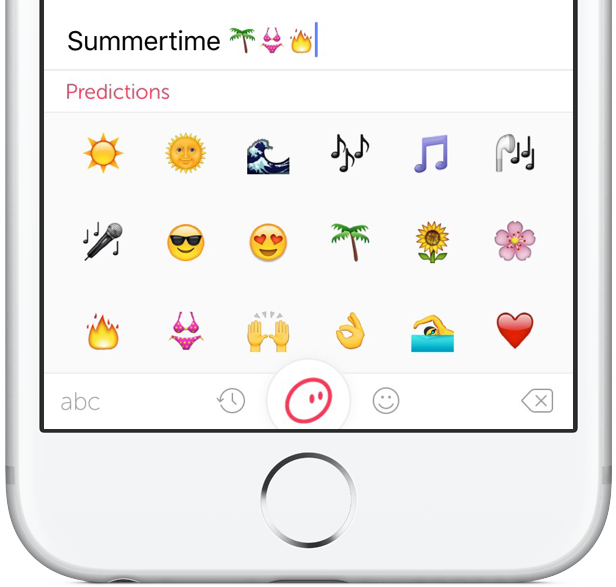 Available at no charge on the App Store, it boosts your emoji game by predicting a wall of suggested emojis based on crowdsourced data, the user’s own preferences and the actual text written in any of the user’s keyboards.

This ability to get perfect emoji predictions based on what you’ve just typed is similar to Apple’s much-improved QuickType keyboard on iOS 10.

After typing something in any of the keyboards you have on your iOS device, tap and hold the Globe key to switch to Swiftmoji and let the perfect emoji come to you.

The app will also recommended emojis you rarely use and forgot existed. Another cool feature lets you unleash an emoji storm on your friends by long-tapping the prediction icon, which adds a bunch of emojis in a random order at the end of your message.

Our own Andrew O’Hara took Swiftmoji for a quick spin.

According to a SwiftKey spokeswoman, they’ve reduced the chances of anyone using Swiftmoji to be caused offence from the emoji predictions suggested although the app won’t prevent you from using whichever emoji you like and in whatever way you like.

TechCrunch noted that the predictions seemed a tad tenuous and hit and miss at times.

“For example, typing ‘viva la France’ did indeed yield the French flag emoji as the first prediction,” as per the publication. “However the second prediction was the Italian flag. Which it’s hard to imagine being useful”.

The app is currently only available in English so you may want to change your iPhone’s regional settings to United States in order to use it in unsupported countries.

Swiftmoji is available at no charge on the App Store.