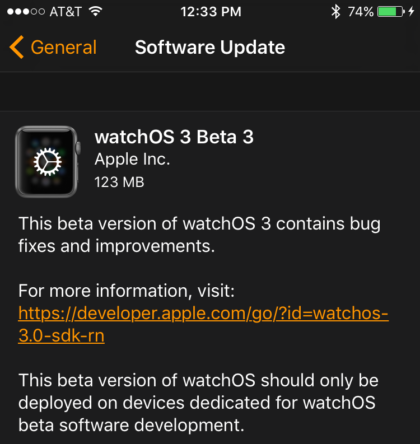 Alongside several other software releases, Apple on Monday issued beta 3 of watchOS 3 for the Apple Watch. Registered developers can download and install the over-the-air update via the Watch app in iOS 10.

Today’s beta 3 has build number “14S5290d” and comes nearly two weeks after beta 2 was released, and about a month after the original beta landed. Introduced at WWDC, watchOS 3 brings about a number of new features and improvements.

Among the new features is the Dock, which gives you quick access to your most-used apps, and a new SOS option, which allows you to quickly contact emergency services. Speed has also been greatly improved.

We are currently installing beta 3, and will be sure to report back with any notable changes. If you spot something we’ve missed, leave a comment below or emailus at tips@idownloadblog.com.