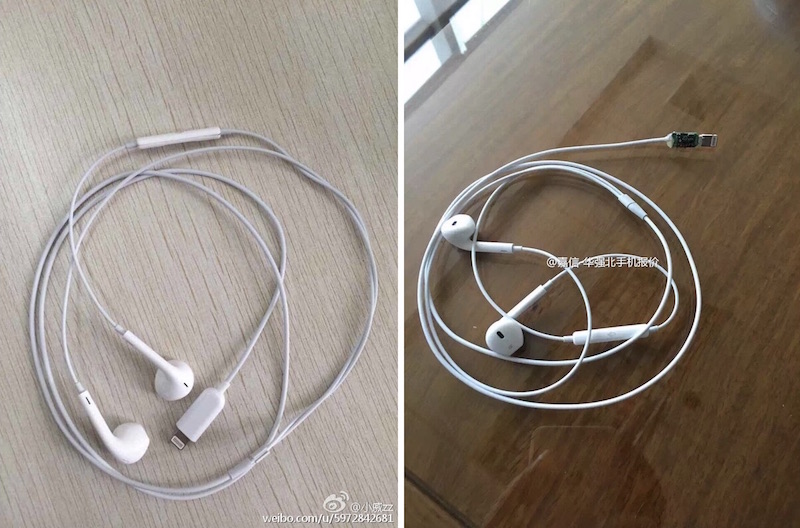 A sketchy photograph just surfaced on the Chinese microblogging service Weibo, appearing to show off a Lightning-based version of Apple’s standard EarPods headphones. As you know, Apple is widely expected to ditch the 3.5mm analog audio jack on the next iPhone in favor of wireless headphones via Bluetooth and all-digital wired headphones based on Apple’s proprietary Lightning connector.

As can be gleaned from the images, the EarPods appear to sport a connection resembling a Lightning connector. On the other hand, these images could also be some joker’s elaborate hoax.

Earlier this week, 9to5Mac rehashed prior reports from the rumor-mill saying that Apple was working on Bragi Dash-like fully wireless EarPods for the next iPhone. It’s unclear from these reports whether the Lightning-enabled EarPods will ship inside the iPhone 7 box or be sold as a standalone accessory.

In case of the latter, Apple could decide to include a 3.5mm-to-Lightning adapter so that iPhone 7 buyers could use their existing headphones with the device.

Mac Otakara first reported in January 2015 that Apple might be planning to bundle the iPhone 7 with a wireless EarPods. The following day, Fast Company said Apple supplier Cirrus Logic had been working on a noise-canceling technology to be used both in the iPhone 7 and the new earphones.