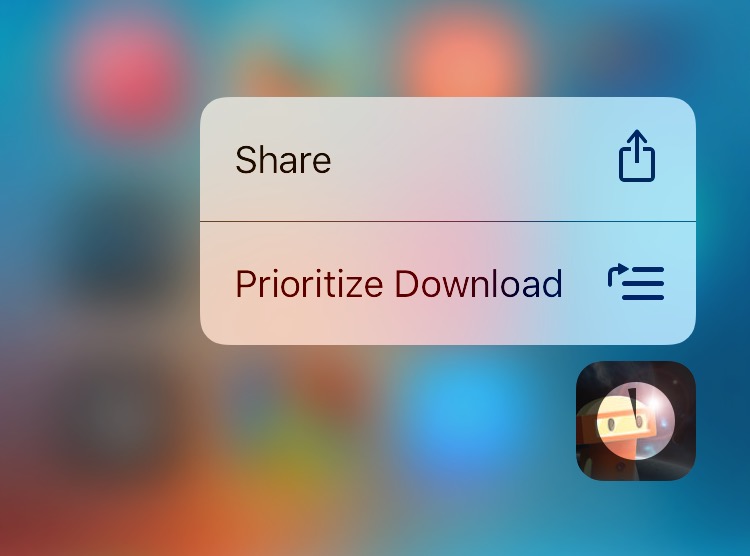 In addition to using 3D Touch on the iPhone 6s and iPhone 6s Plus to cancel or pause in-progress app downloads, iOS 10 lets you prioritize a single App Store download at the expense of the other ones with 3D Touch. Reddit user “nite_” stumbled upon this feature while restoring his iPhone running a beta of iOS 10 from an iCloud backup, allowing him to prioritize the bulk download of apps with 3D Touch.

To prioritize an App Store download, press the Home screen icon of the app being downloaded or updated, then select Prioritize Download in the shortcuts menu. Installation of other apps pauses temporarily until the prioritized download completes.

The shortcut appears only if multiple apps are being downloaded at the same time.

Owners of older iPhones that don’t have 3D Touch can continue prioritizing their App Store downloads like before, by tapping the icon of the app being downloaded but with one important distinction: tapping the icon pauses the current download rather than prioritize it, which results in a lot of tapping when you have multiple downloads in progress and want to prioritize a single one.

It would be great if iOS 10 used 3D Touch to let us snooze app upgrades or hide updates completely in the App Store. Even better, an option to never download specific app updates would be much appreciated.

At any rate, this new 3D Touch option in iOS 10 will make it easier for people to prioritize their App Store downloads and should be especially handy when restoring the device from an iCloud backup when the app you want to use is the last in the download queue.