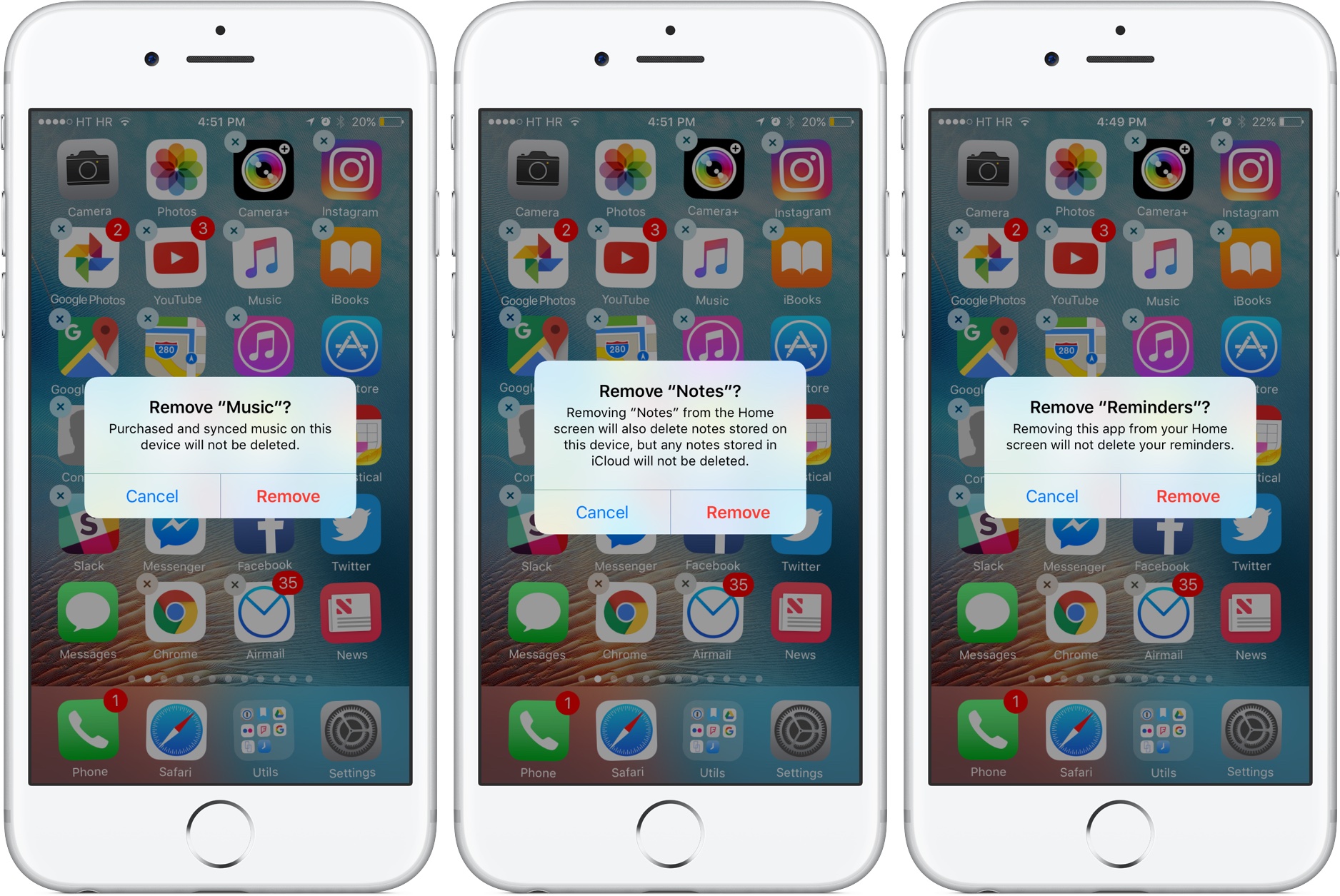 In an effort to address one of the longest standing customer pain points with iOS, Apple has officially confirmed that a bunch of first-party apps can be removed from iOS 10 devices. But as it turns out, deleting a stock app won’t do what you’d expect.

They’ve confirmed that deleting a stock iOS 10 app only removes its icon from the Home screen and deletes user data associated with the app, leaving actual app binaries intact on your device. Here’s why this isn’t such a big deal as it might sound and how removing specific first-party Apple apps might affect iOS 10’s functionality.

For starters, this is actually evidenced by the wording of Apple’s prompt.

According to Schiller and Federighi, that’s because app binaries must remain on an iOS device as part of the signed package that Apple uses to guarantee authenticity. As a result, re-downloading a removed stock app won’t actually download anything. Rather, the process will simply re-link the removed app back into iOS and put its icon on the Home screen.

Which stock iOS 10 apps are removable?

The following stock apps can be “deleted”—that is, removed from the Home screen:

The News app will be removable in a later version of iOS 10 beta, Apple says. It’s also curious that you can currently remove the Contacts app from an iPhone only.

The good news is, despite the fact that many people deem stock apps as bloatware, the truth of the matter is that these app binaries take up very little space on your devices (excluding any user data, of course).

“The apps built into iOS are designed to be very space efficient, so all of them together use less than 150MB,” reads Apple’s support doc on deleting iOS 10 stock apps.

“When you remove a built-in app from your Home screen, you also remove any related user data and configuration files,” cautions the company. Because deleting stock apps results in their functionalities becoming unavailable to various system services, you have to be careful about the built-in apps that you’ll be removing.

For instance, removing the Watch app from an iPhone that’s paired with an Apple Watch will yield an alert asks you to unpair your watch before you can remove this app. Hiding the Calculator app will make its icon disappear from Control Center.

And if you remove the Stocks or Weather app, you won’t see stocks and weather information in the Notification Center on an iOS device or as Complications or Glances on an Apple Watch.

Likewise, removing other stock apps might affect related system functions. For instance, removing the Music or Podcasts app will also make it unavailable to use with CarPlay.

So, what happens when a stock app such as Mail or Calendar with a system-default URL scheme gets deleted? As it turns out, as soon as a user follows a link that requires its containing app, iOS pulls up a dialog offering to restore the app from the App Store. 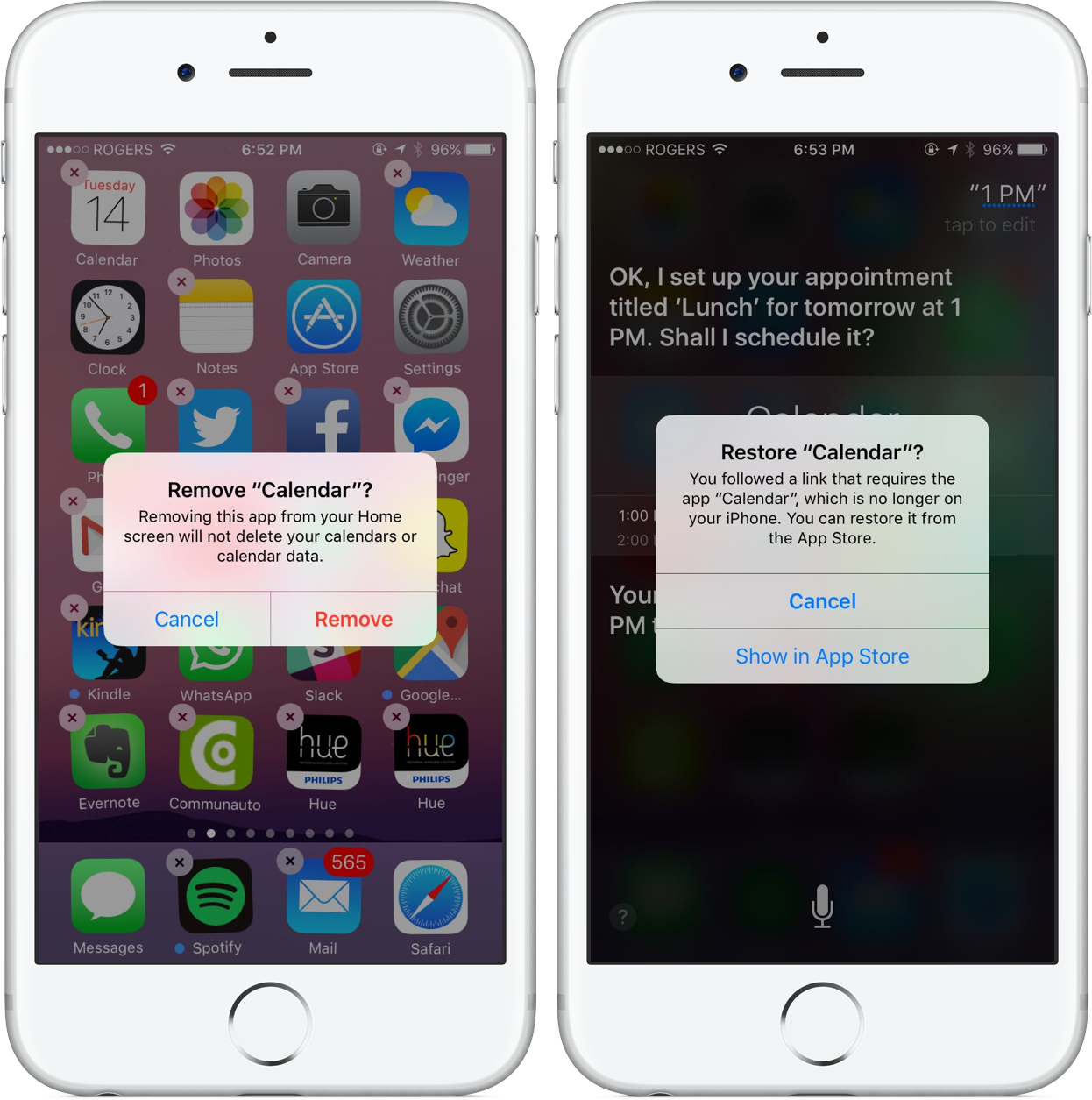 For instance, telling Siri to add an event to your calendar after you have removed the stock Calendar app yields the aforesaid dialog.

To re-link a previously removed stock app into iOS 10, download the app from the App Store. Wait for the app to restore, then open it from your Home screen.

Why you shouldn’t be concerned

Although things clearly aren’t quite as straightforward as they sound, I think Apple is doing the right thing here. People now at long last have an officially-sanctioned way to hide those stock apps they never use in order to declutter their Home screens.

And with stock apps taking up just 150 megabytes of storage, the fact they’re simply hidden rather than being permanently removed shouldn’t concern average users.

Most importantly, Apple’s solution does not increase the number of potential points of failure, which is precisely what would’ve happened had they decided to update stock apps through the App Store independently of iOS software updates.

Now that you know all of this, do share with fellow readers in the comments below your thoughts, observations and feelings about removing first-party iOS 10 apps.