One of the top things that those without jailbreaks wish they could do is put blank spaces between app icons on the Home screen.

Whether it’s to help with your creative organization technique, or to simply add a personal touch or pattern to your Home screen, you may be excited to hear that it’s possible to create blank spaces between your app icons on a completely stock, non-jailbroken iOS device.

In this tutorial, we’ll talk about how you can generate blank spaces between your app icons on the Home screen, as shown above, without having a jailbreak.

So if you’ve made it this far, then you’re probably interested in how to create blank spaces between your app icons on the Home screen without that prized jailbreak you’re missing.

An online utility that you can visit in Safari known as iEmpty will allow you to do this.

With this process, dummy app icons are created on the Home screen that make up puzzle pieces of your unique wallpaper. Because they will blend right in to your wallpaper, it’ll appear as though the app icons are actually blank.

Is it making sense yet? If not, don’t worry because we’re going to show you how this works.

Because this is a rather cumbersome process, I won’t waste any more of your time; instead, we’ll get right into how to do it.

To make blank app icons on your device, you’ll want to follow these steps precisely:

1) On your Home screen, enter ‘jiggle’ mode by tapping and hold on one of your app icons.

2) While you’re in jiggle mode, go to the last page where you have no apps. 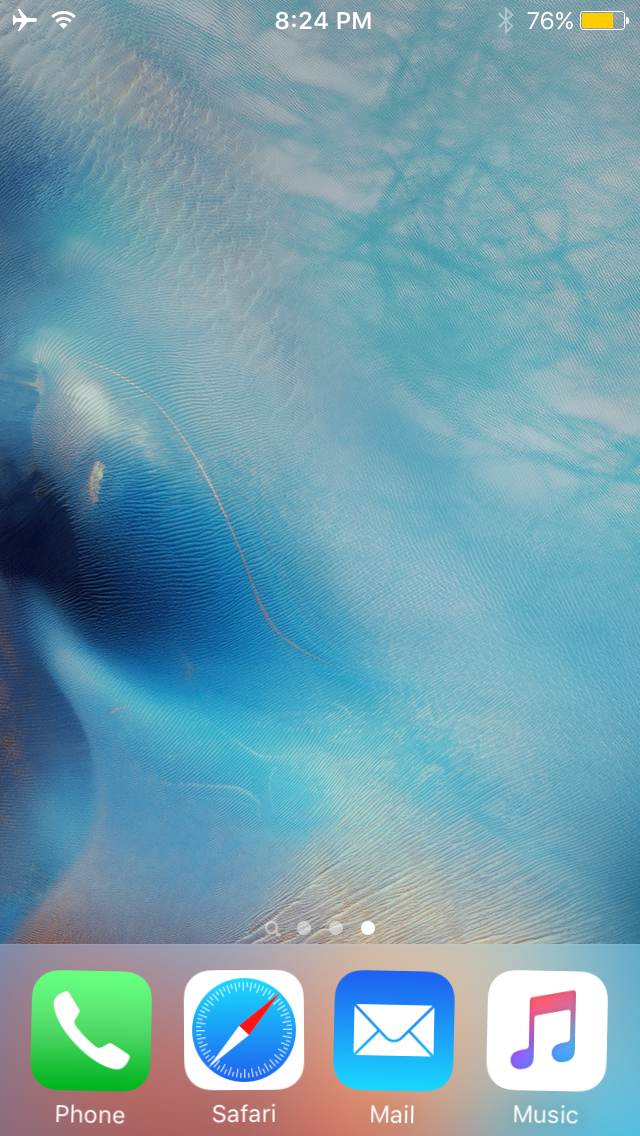 3) Take a screenshot by pressing both the Home button and power button simultaneously. This puts a picture of your wallpaper in the Photo Library.

4) Launch Safari and type http://iempty.tooliphone.net into the URL bar, then tap Go. 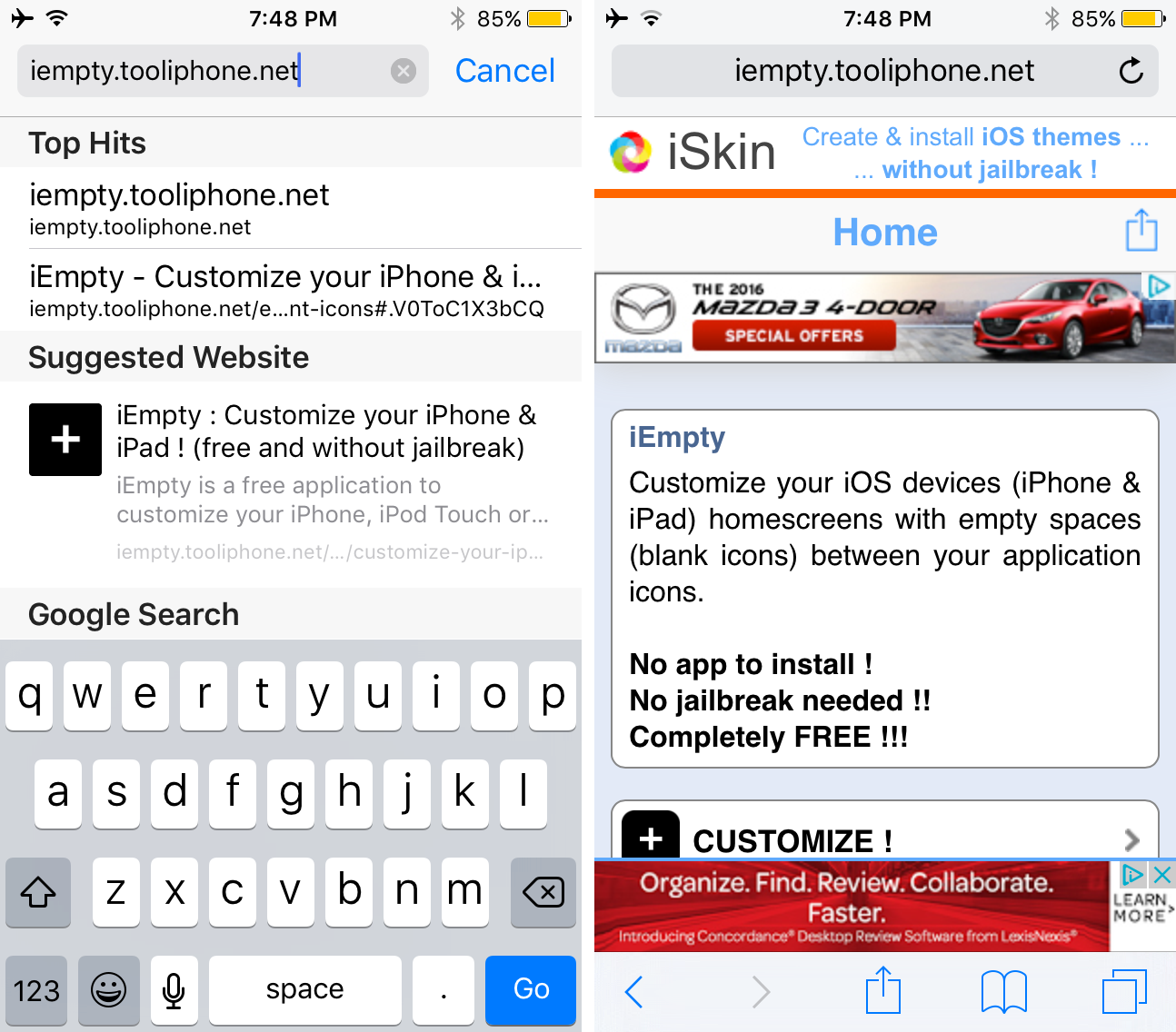 5) After visiting the website, you will need to tap on the Customize button. 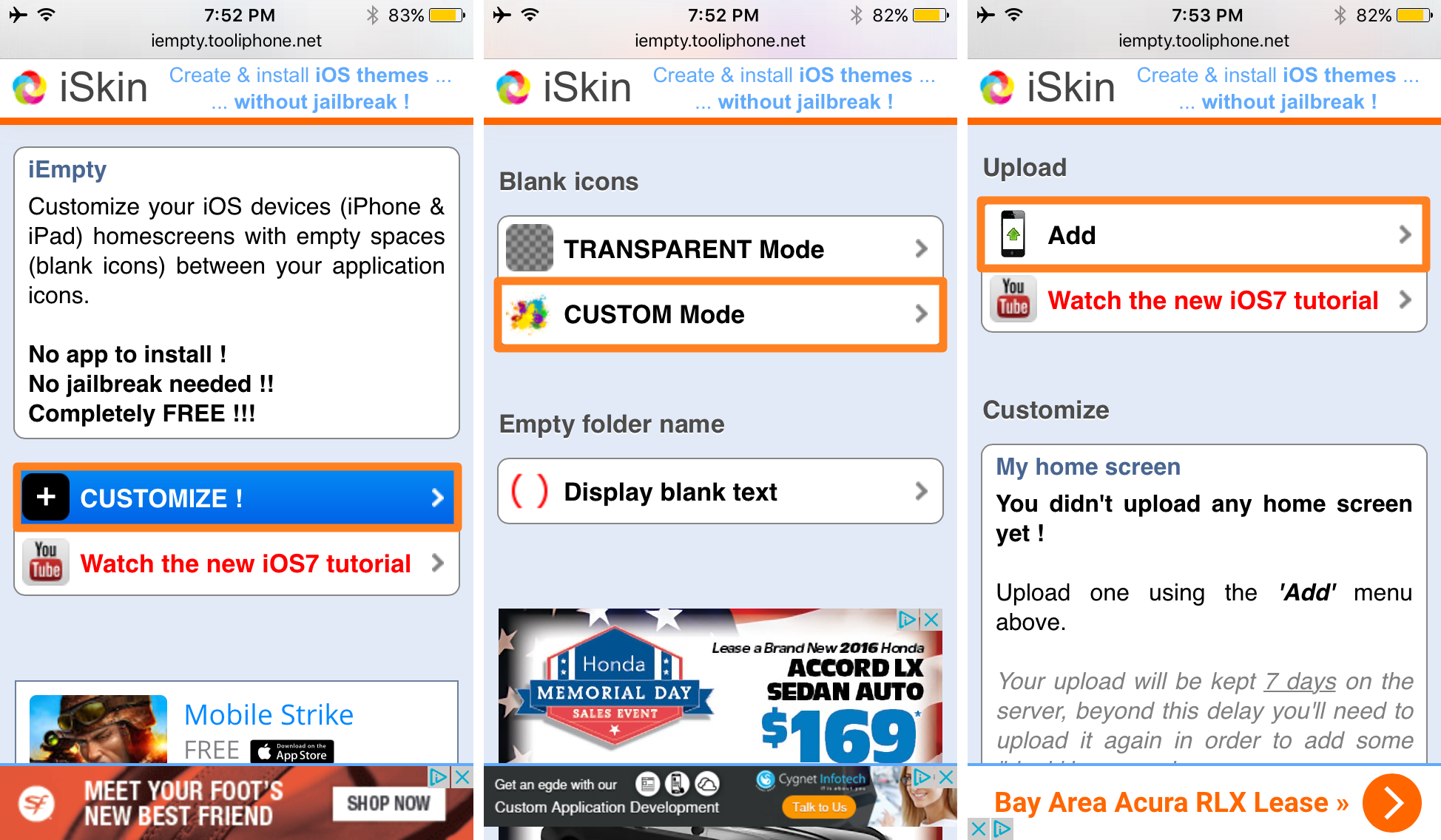 6) Next, tap on the Custom Mode button, and on the following page, you’ll tap on the Add button.

7) Now, you’ll be asked to upload the screenshot you took earlier. Tap on the Choose File button. 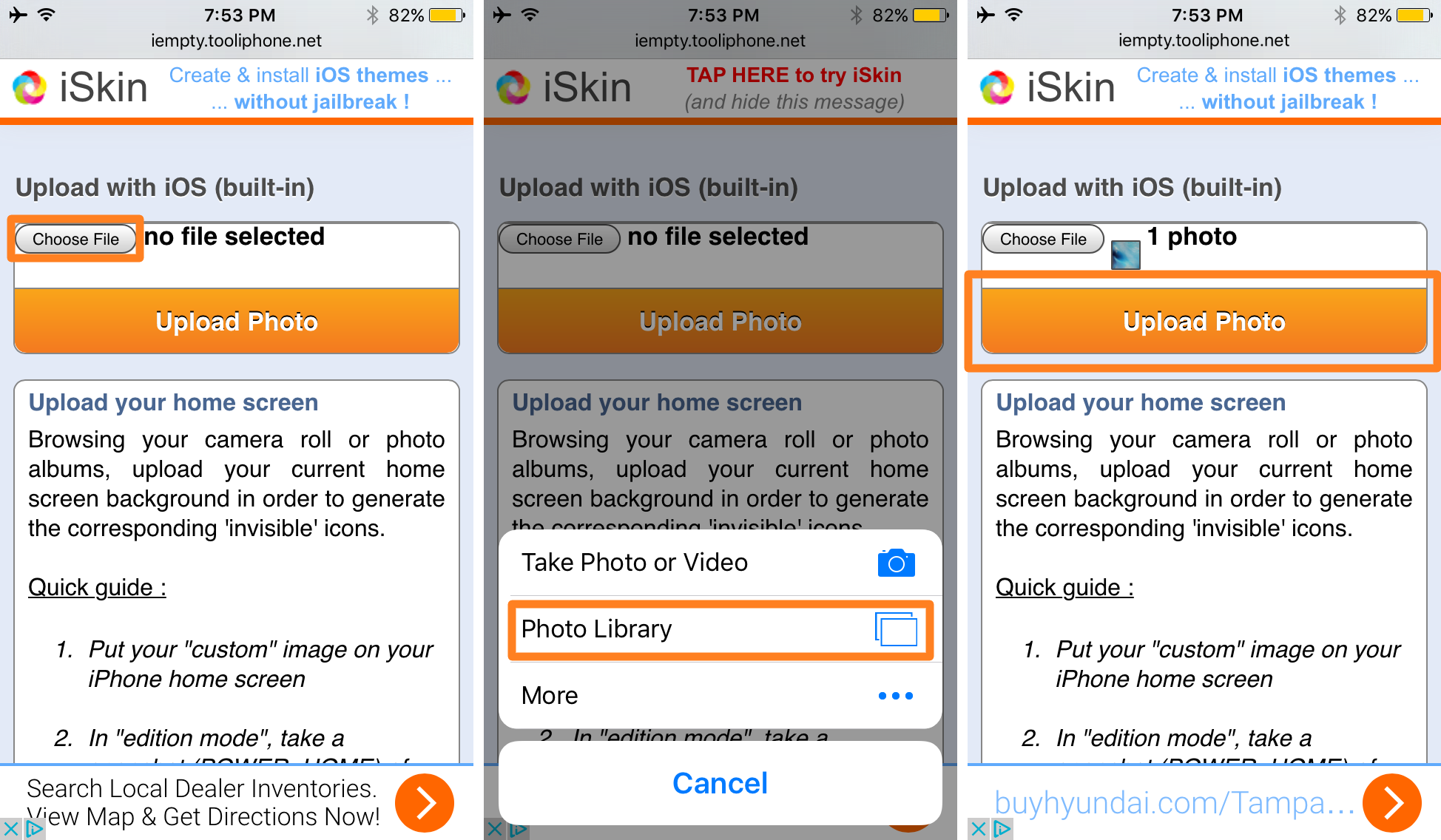 8) From the pop-up menu, tap on the Photo Library button and then select the screenshot you took from your Photo Library.

9) You should now see a preview of the screenshot in the web interface. Tap on the orange Upload Photo button if it looks correct.

10) Now you’ll see a large version of your screenshot with a grid of blank app icons. Tap on one of the icons in the grid where you want a blank space to appear on your Home screen.

11) iEmpty will now generate an app icon based off of the piece of your wallpaper you chose. Tap on the Share button in Safari’s bottom navigation bar.

12) Tap on the Add to Home Screen button in Apple’s share sheet.

13) Without modifying any of the information in the Add to Home interface, tap on the Add button to add the icon to your Home screen.

14) The icon is added to your Home screen with a blank name. Drag it to the proper location to create the illusion of a blank space between your app icons:

15) Repeat the process in steps 10-14 over and over for each app icon you wish to create, then just drag them to the desired location:

Pro Tip: You can simply tap on the back button in Safari to return to your wallpaper page; there is no need to re-upload your Home screen wallpaper screenshot each and every time you want to make an icon. Instead, just keep tapping on the spots in the grid where you want a blank icon to appear and a new icon will be generated to be used.

This method works well to create a visually appealing illusion of having blank spaces between your app icons on the Home screen without a jailbreak, but there are some caveats to discuss. So we’ll briefly touch on those.

First of all, you’re creating Safari bookmark links on your Home screen. This means that when you accidentally tap on one of the blank spaces, you’re going to be sent to the iEmpty website in the Safari app and you’ll have to close Safari to get back to the Home screen. It can get annoying if you’re clumsy, so I suggest you take care not to tap on the ‘blank’ spaces of your Home screen.

Moreover, the icons are not transparent, so as you scroll through your Home screen pages and the dynamic of the icons changes, you will still see the icons. An example of what I mean can be seen below: 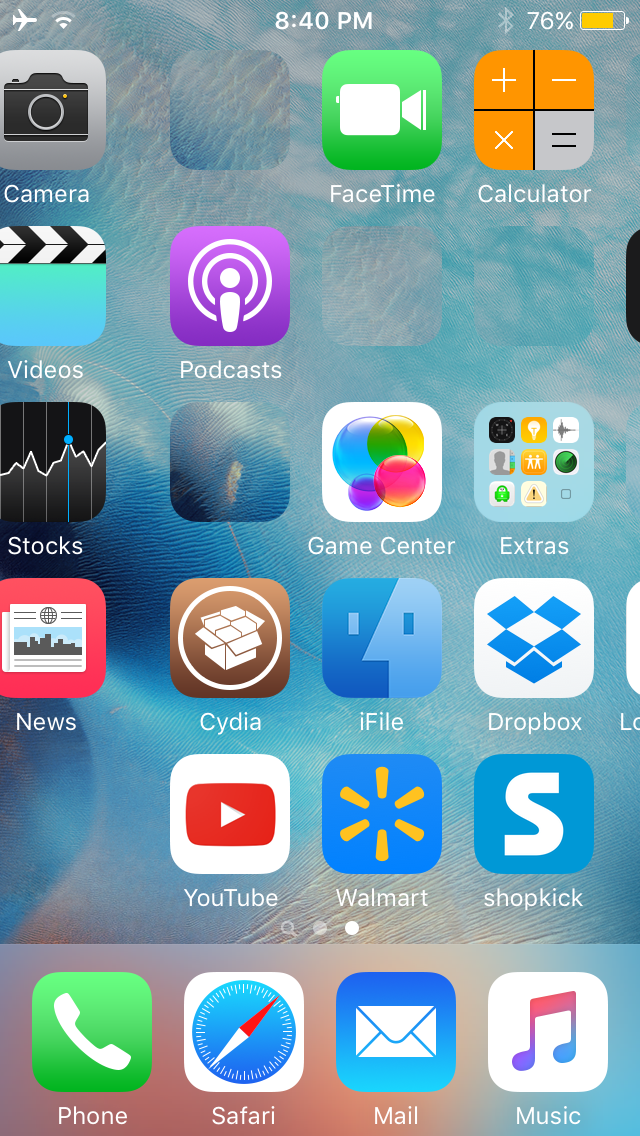 Overall, swipe animations are relatively fast, so this is a nit-picky beef on my end. The icons quickly disappear from sight as the Home screen aligns itself after every scroll.

Because of the aforementioned issue, I can see where Parallax effects might cause the icons to become slightly visible. I haven’t really tested Parallax effects that much because I’m not really a fan of them and I keep them turned off, but it’s something to keep in mind for those of you who do use them.

On a positive note, if you ever wanted to remove the blank spots, all you would need to do is delete the bookmarklets from your Home screen and the space would be occupied by the next available app icon.

For a solution that doesn’t require a jailbreak at all, iEmpty is a great free way to get blank spaces between the app icons on your Home screen so it looks the way you want it to look.

There are obviously some caveats, but nothing will ever be as streamlined as a jailbreak tweak that gives you the control you want over your device. Hopefully a jailbreak doesn’t take too much longer, but to hold you over until then, I’d recommend checking out iEmpty.

Also read: How to theme your Home screen app icons without a jailbreak

Do you like to have empty spaces on your Home screen between your app icons? Share in the comments!