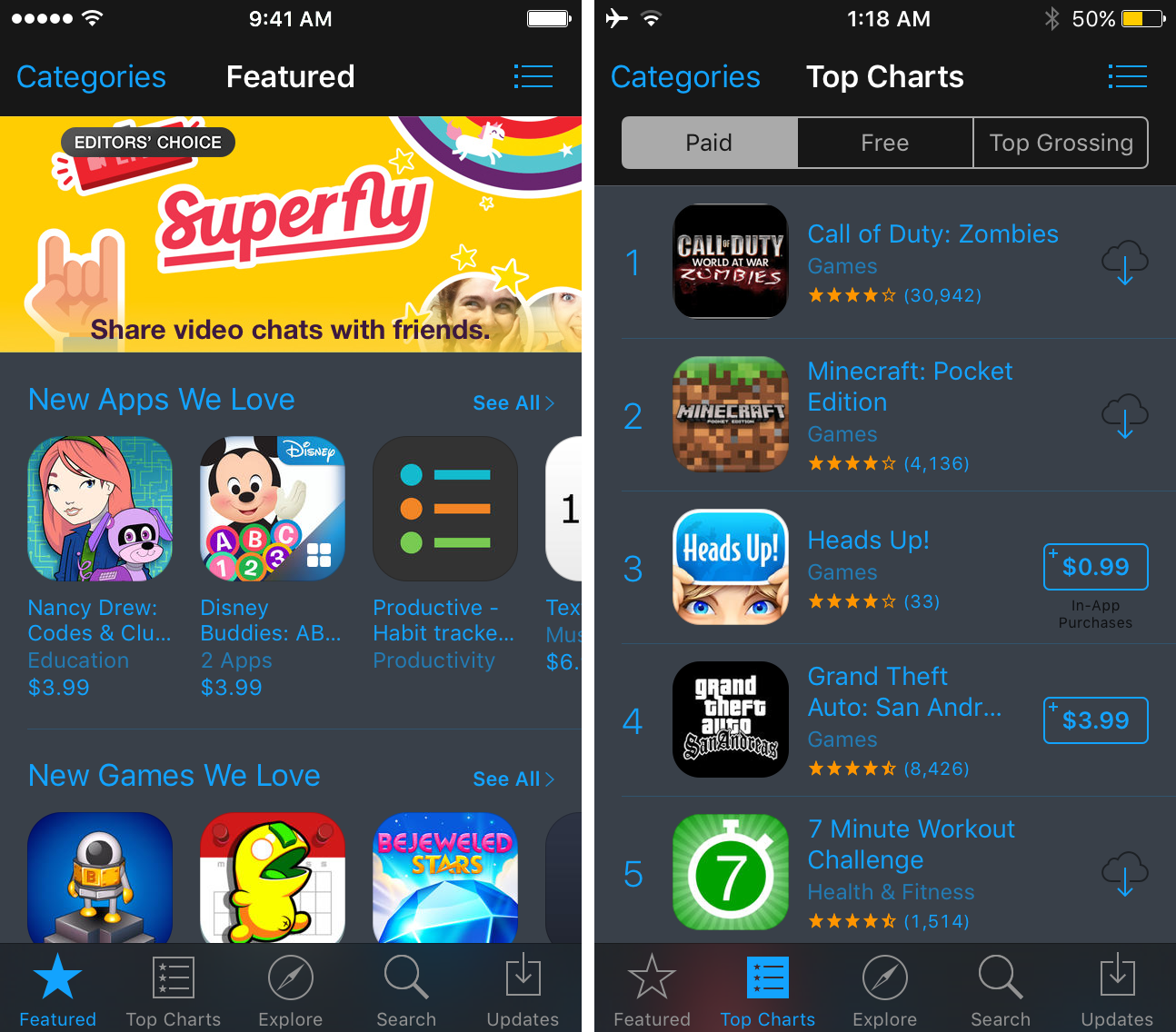 ThemeStore is a new customization platform intended specifically for the App Store app on your jailbroken iPhone, iPod touch, or iPad. With it, you’ll not only be able to customize the look of the App Store, but you’ll also find some functional goodies packed inside of it.

We’ll walk you through some of the features of ThemeStore in this review so you can decide if it’s the tweak for you.

Customize the App Store with ThemeStore

Now I know what you’re thinking from the screenshots above. Obviously, at a first glance, this just looks like another night mode tweak, right?

Well, you’d be wrong; there is a lot more to the tweak than just changing some colors, although theming is definitely a big part of the tweak’s core functionality.

The tweak lets you customize the look and feel of your App Store with the power of CSS. Both a default and dark theme are included out of the box, but you can always create or download more themes in the future if you don’t like what’s offered. Obviously, the tweak is new so the current selection is limited.

ThemeStore’s options are accessed directly from the App Store itself from the Updates tab in a new section labeled ThemeStore Settings: 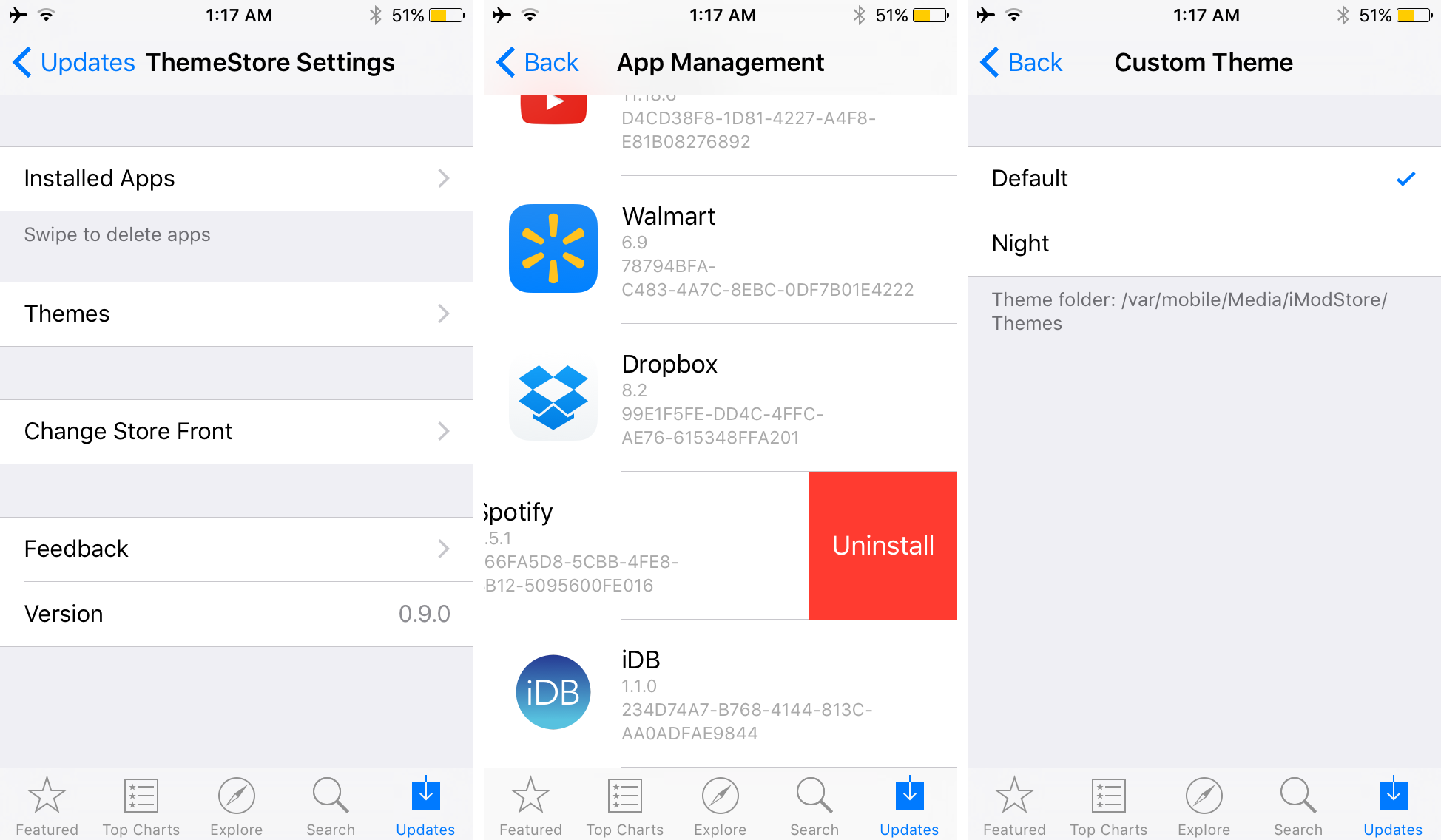 Once you’re there, you’ll have access to the following features:

So since we’ve already basically touched on the fact that you can theme the look and feel of the App Store, so now we’ll talk a little more about the other features of the tweak, which are the quick uninstall interface and the country-changing feature.

The quick uninstall interface is essentially a list of apps that you have installed on your device. You can tap on them to view information about the respective app in the App Store, or you can swipe to the left on any of the apps to reveal a red Uninstall button that you can tap to remove the app from your device.

The other major feature that comes with ThemeStore is the ability to change the country that you view the App Store from. By default, your App Store is set to your specific region, but sometimes apps only launch in the App Store for certain countries, and not all of them.

That’s where this feature will come in handy. The next time an app soft-launches in only a few countries, you can simply change your App Store front to whatever country the app soft-launched in.

I’m not big on theming, but I do like things that I can actually use.

I think that the App Store front-changing feature is probably the most useful feature of the tweak. Since I was once a big fan of some iOS games that were soft-launched in other countries before mine, I do think I would use this feature in the future if given the chance.

As far as the uninstalling interface is concerned, this is something that can be accomplished from the Home screen itself, but it’s kind of a nice way to see everything in a list view in alphabetical order and easily remove what you don’t want.

Is this a tweak I would recommend to everybody? Not particularly, but I do think there is some potential in some of the features being offered; mostly in that front-changing feature.

With ThemeStore, you can change the look and feel of your App Store app, and supercharge it with additional features that give you more control over app management and installation. The tweak can be had free of cost from Cydia’s BigBoss repository, so there’s nothing to lose if you don’t like it.

What are your thoughts on ThemeStore’s features? Share in the comments!