One of the things that can be really peeving about third-party keyboards in iOS is how you can only jump to the next keyboard instead of actually being able to pick a new keyboard to use immediately after.

iOS developer PoomSmart has the right idea with a new free jailbreak tweak called LetMeSwitch, which makes switching from a third-party keyboard to a different keyboard easier than ever.

Most people just work around this problem; others are still bothered by it and therefore don’t use third-party keyboards on their devices (myself included).

On any third-party keyboard, all you’re going to see is a “next keyboard” button, like you see below: 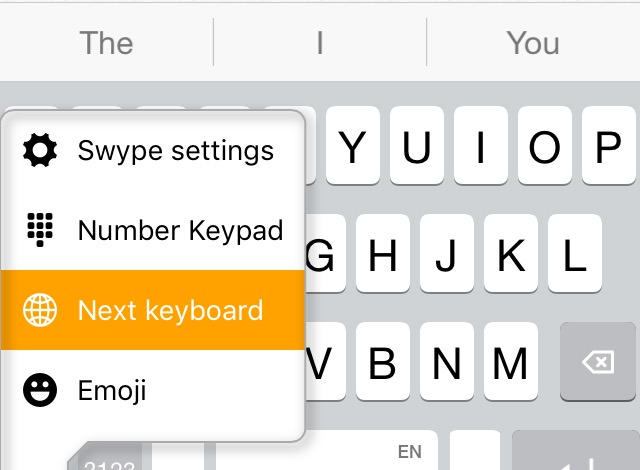 Because I don’t want to go to the “next keyboard,” but instead want to go to a specific keyboard, which might not be the next one in line, this keyboard-switching method that has been implemented out of the box by Apple is cumbersome, and is one of the reasons I don’t even bother with third-party iOS keyboards anymore.

In comes a solution: LetMeSwitch

LetMeSwitch is a clever solution for jailbreakers that addresses the inability to select a specific keyboard to switch to when you’re in the middle of using a third-party keyboard.

This tweak re-assigns the keyboard switching button on any third-party keyboard to show an Alternate Keyboards menu rather than a “next keyboard” button.

Now, rather than going to the “next keyboard,” which may not be the one I want, iOS displays a menu that lets me pick the keyboard I know I want for sure. And boom, just like that, I’ve saved my time.

This tweak offers a dead-simple way to fix a problem that exists with third-party keyboards on iOS. By eliminating the “next keyboard” button and giving you a keyboard switcher, so to speak, you can easily get to the keyboard you want instead of wasting time with keyboards you don’t want.

I think this is a solution everybody should have, and I think Apple needs to take note for future iterations of iOS.

One thing to note is that you have to restart all of your third-party keyboards after installing the tweak to get the tweak to work, so this is somewhat of an annoying manual workaround, but once you take care of if, you can use the tweak and take advantage of ongoing convenience throughout your iOS experience.

LetMeSwitch doesn’t have any options to configure, so it’s relatively nice that you can just install the tweak and start using it immediately without any complicated settings.

To make your iOS keyboard switching faster and more efficient, you can install LetMeSwitch from Cydia’s BigBoss repository free of charge right now. The tweak works on both iOS 8 and iOS 9 devices, so everyone with a jailbreak can cash in on the functionality.

What are your thoughts on eliminating the “next keyboard” button? Share in the comments!