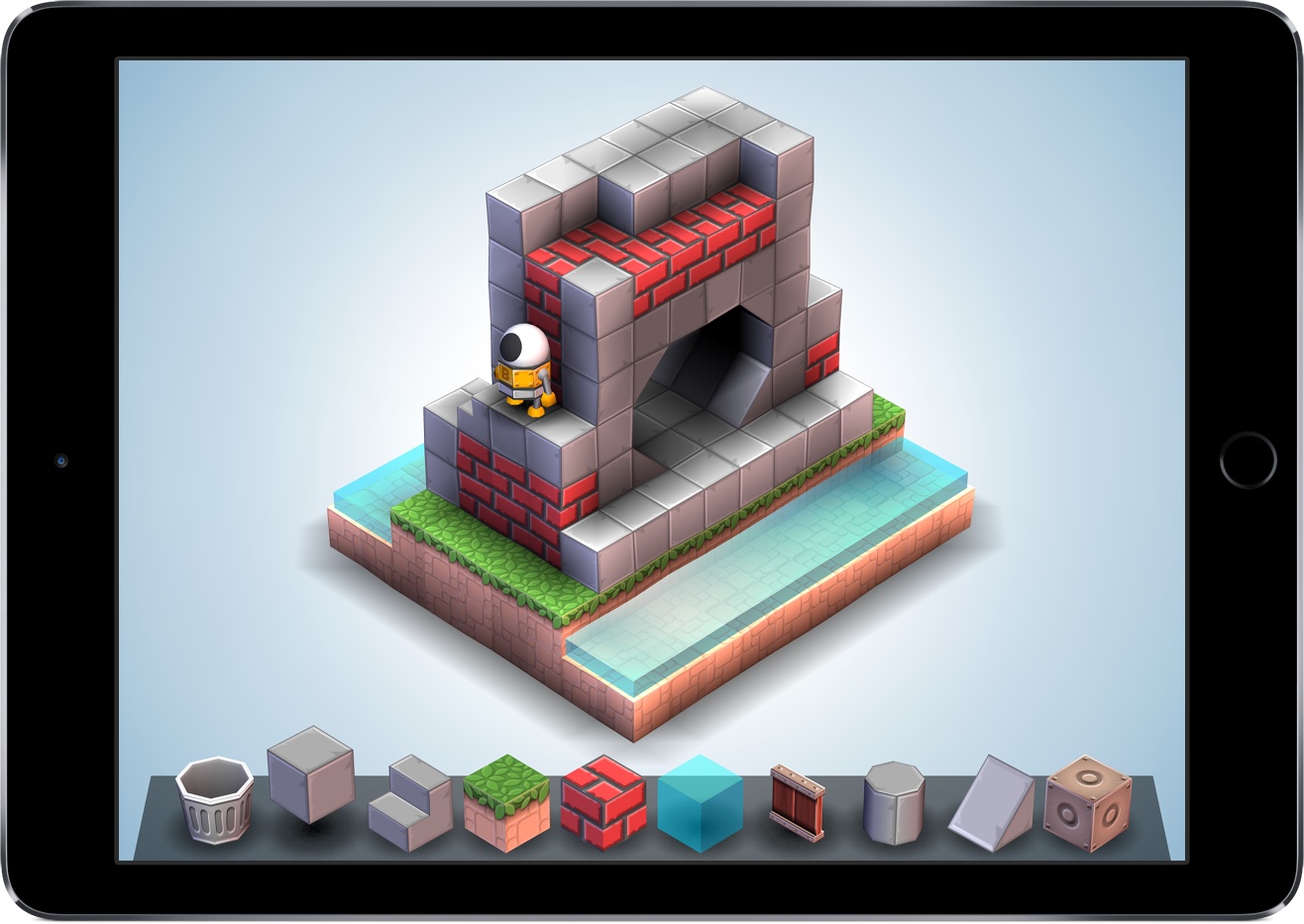 In this addictive and remarkably well-executed game, you’re tasked with guiding a charming robot as he embarks on a journey through more than fifty mechanical dioramas.

As a great bonus, Mekorama comes with a full-blown level editor that lets anyone build their own dioramas and share them online via built-in QR code scanning, no additional downloads required whatsoever.

It’s your job to help the endearing robot stumble home through the tiny mechanical dioramas. Called “B” due to its bumbling movement and yellow/black paint job, he can be guided to the exit by rotating structures with your finger and moving the pieces around.

Here’s a quick promotion video that’ll give you a good feel for the game.

Like the aforementioned Odd Bot Out, all design, code, art, sound and procedurally created music for Mekorama was single-handily done by Magni. The game is driven by a custom engine which Magni wrote from scratch in C. 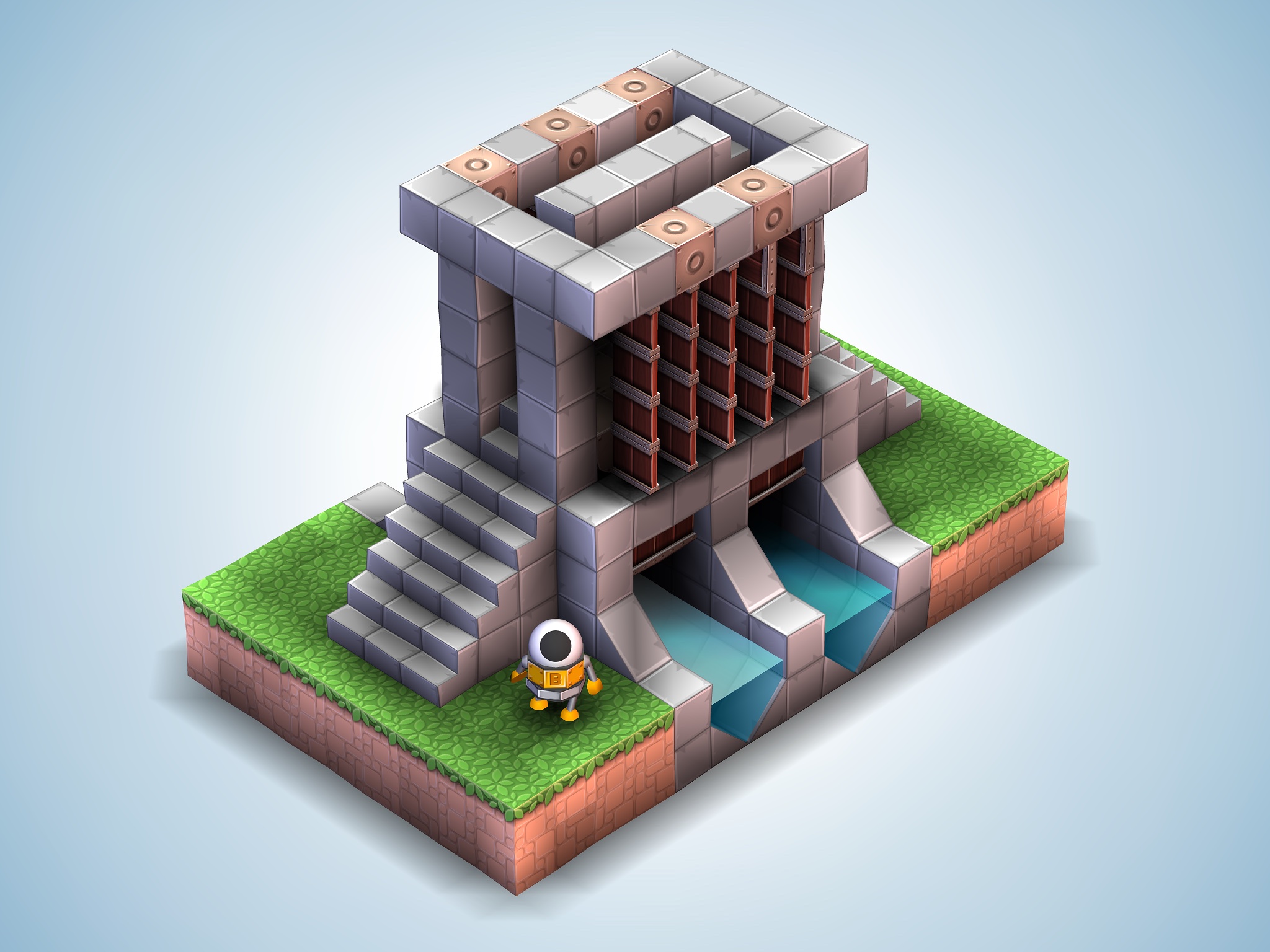 Remarkably, Mekorama is a tiny 7.3-megabyte download from the App Store.

In addition to rotating whole structure, you can move individual pieces around or slide any piece to reveal the direction it moves. Levels can be played in any order. The game does not impose any time limits nor is it turn-based. 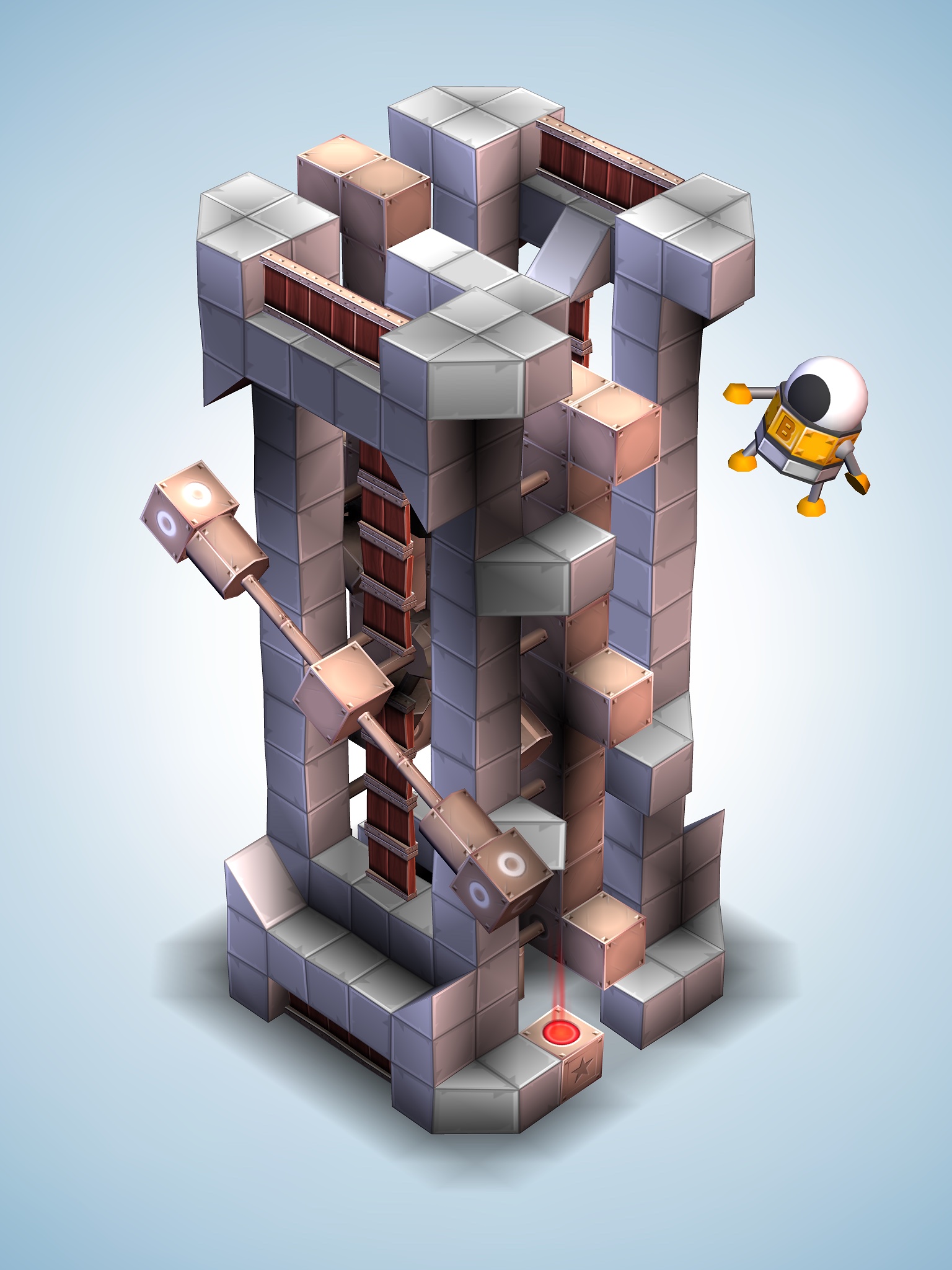 Mekorama supports portrait and landscape orientation on the iPad.

As mentioned, Mekorama comes with a built-in level editor that lets you create your own mechanical dioramas and share them online for anyone to download and play. The editor provides various building blocks such as grass, stone, motors and robots.

Simply tap any object to place it. Your creations are automatically saved as level cards with a QR code on them, and you can even print the levels on paper. Your level is actually saved as a QR code 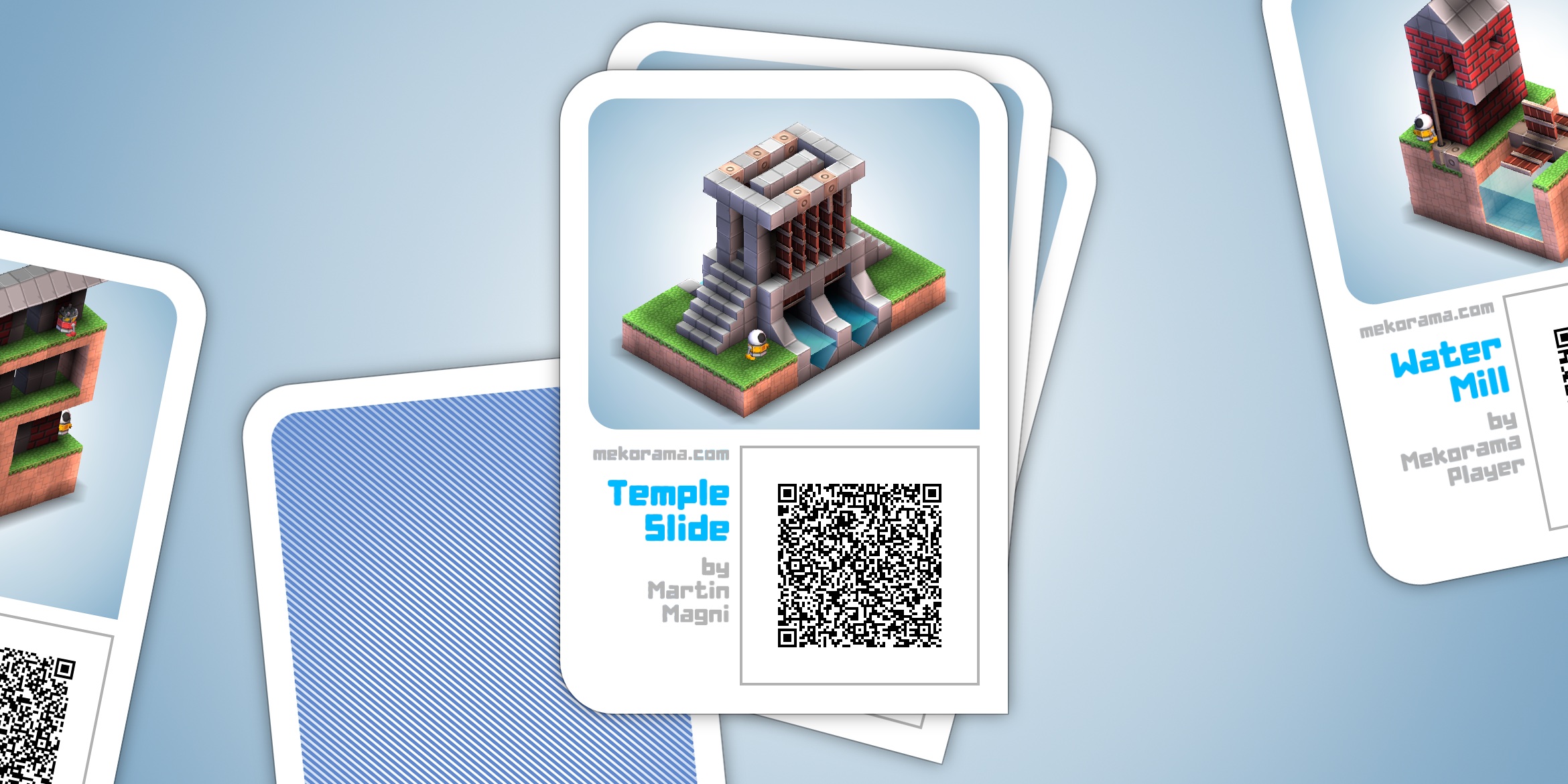 What’s really remarkable is the fact that all fifty levels in Mekorama are less than 14KB in combined size, meaning you can actually scan 10,000 levels before taking up as much space as snapping a single photo.

In fact, one of the App Store screenshots for Mekorama contains a QR code which you can scan to play a bonus level.

Mekorama’s design and mechanics are bound to withstand the test of time.

The levels are addictive and the user interface is a work of art. The only thing missing from the initial release of Mekorama are themes. Currently, the graphics engine does not offer a lot of variety in terms of different themes, such as space, medieval and so forth, but future updates might address that complaint. 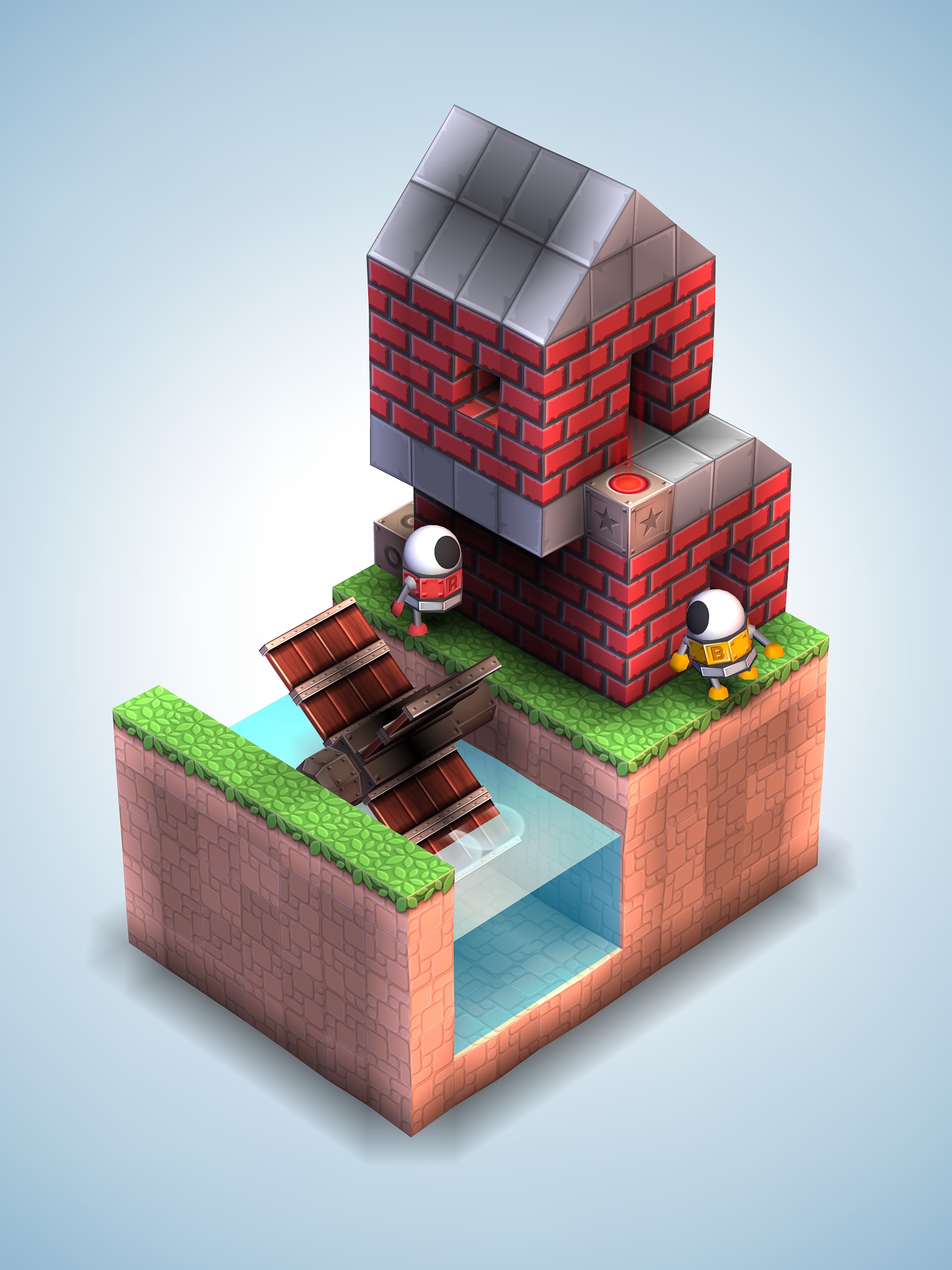 Magni should be applauded for having the guts to release Mekorama on an entirely free-to-play basis, supported by a pay-what-you-want (or nothing at all) model. I would gladly pay a couple bucks for this game if Magni priced it—it’s that good.

With the ability to easily create your own levels, share them online and get new levels from others, Mekorama certainly has a lot replay value to offer. Signing off, here’s one more factoid: the developer loves robots because he used to work in a tiny robot factory. 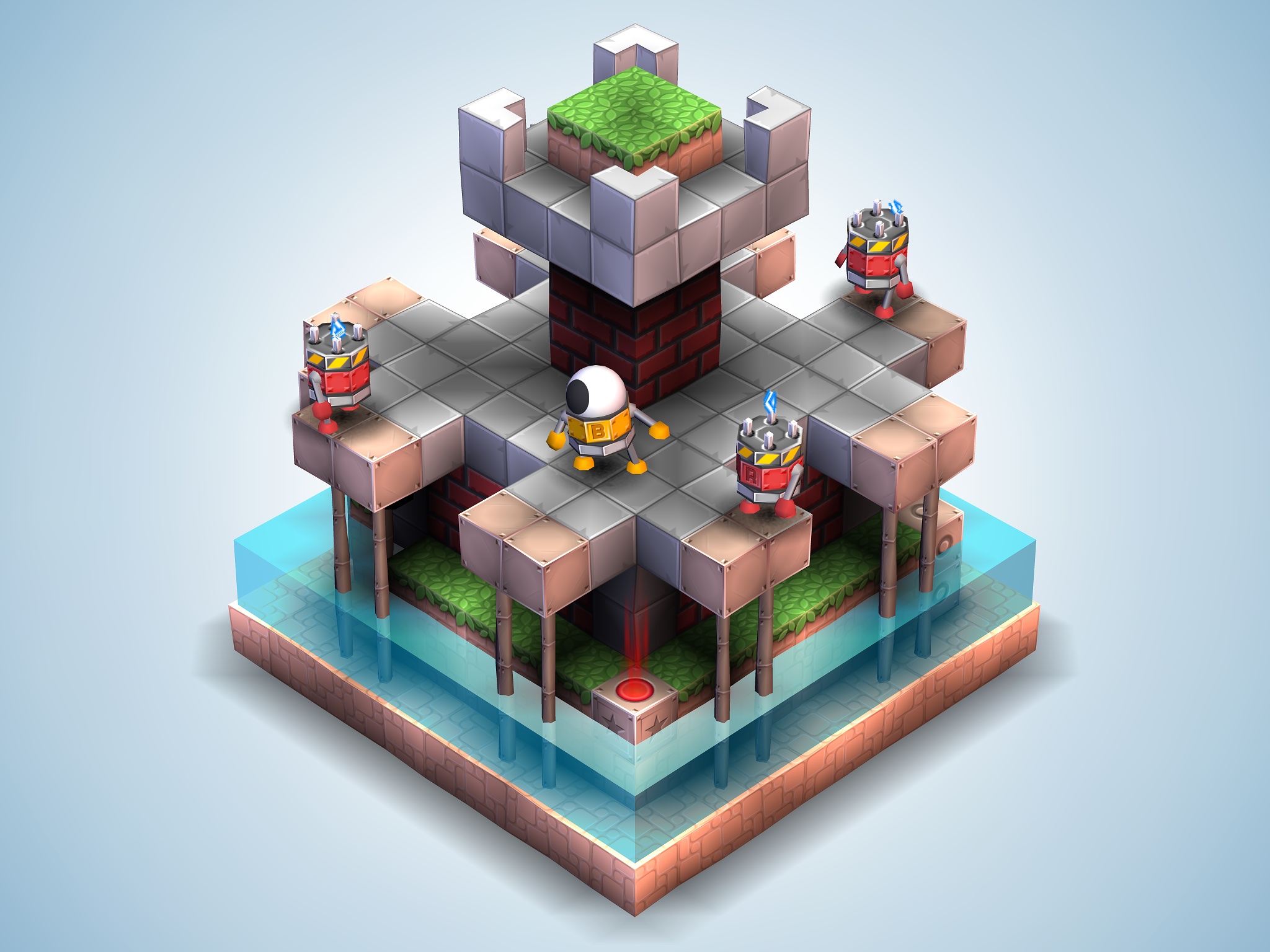 Mekorama requires an iPhone, iPod touch or iPad with iOS 6.0 or later. The English-only app is not optimized for the 12.9-inch iPad Pro’s ultra high-resolution screen.

The app is available at no charge on the App Store.

Mekorama has entirely optional In-App Purchases that range from 99 cents to $15.99, a great way to acknowledge and award the great deal of hard work Martin put in during Mekorama’s creation.