Theming your iPhone, iPod touch, or iPad has been a long time primary reason of jailbreaking. Unfortunately, as the wait for a new jailbreak becomes ever so longer in between iOS releases, the jailbreak scene is becoming less reliable for getting the features you want on the latest version of iOS.

For those who are tired of waiting, iSkin is a new platform that can be used directly from your Safari web browser to install themes on your iOS device without a jailbreak, and we’ll show you how it’s used in this tutorial.

Installing themes on your iOS device without a jailbreak

It might sound too good to be true, and in some ways it is, but it’s now possible to have themed app icons on your Home Screen without having a jailbreak. This method works on iPhone, iPod touch, and iPad running iOS 7 and later.

So basically, iSkin is going to add shortcuts to your Home Screen. These shortcuts can be used to launch the respective app or web clip link with a simple tap on the corresponding shortcut. This means you’ll want to add all your stock iOS icons into some kind of folder to hide them afterwards once you’ve downloaded a themed pack of app shortcuts.

1) Visit the iSkin web page in Safari on the iOS device you wish to theme. 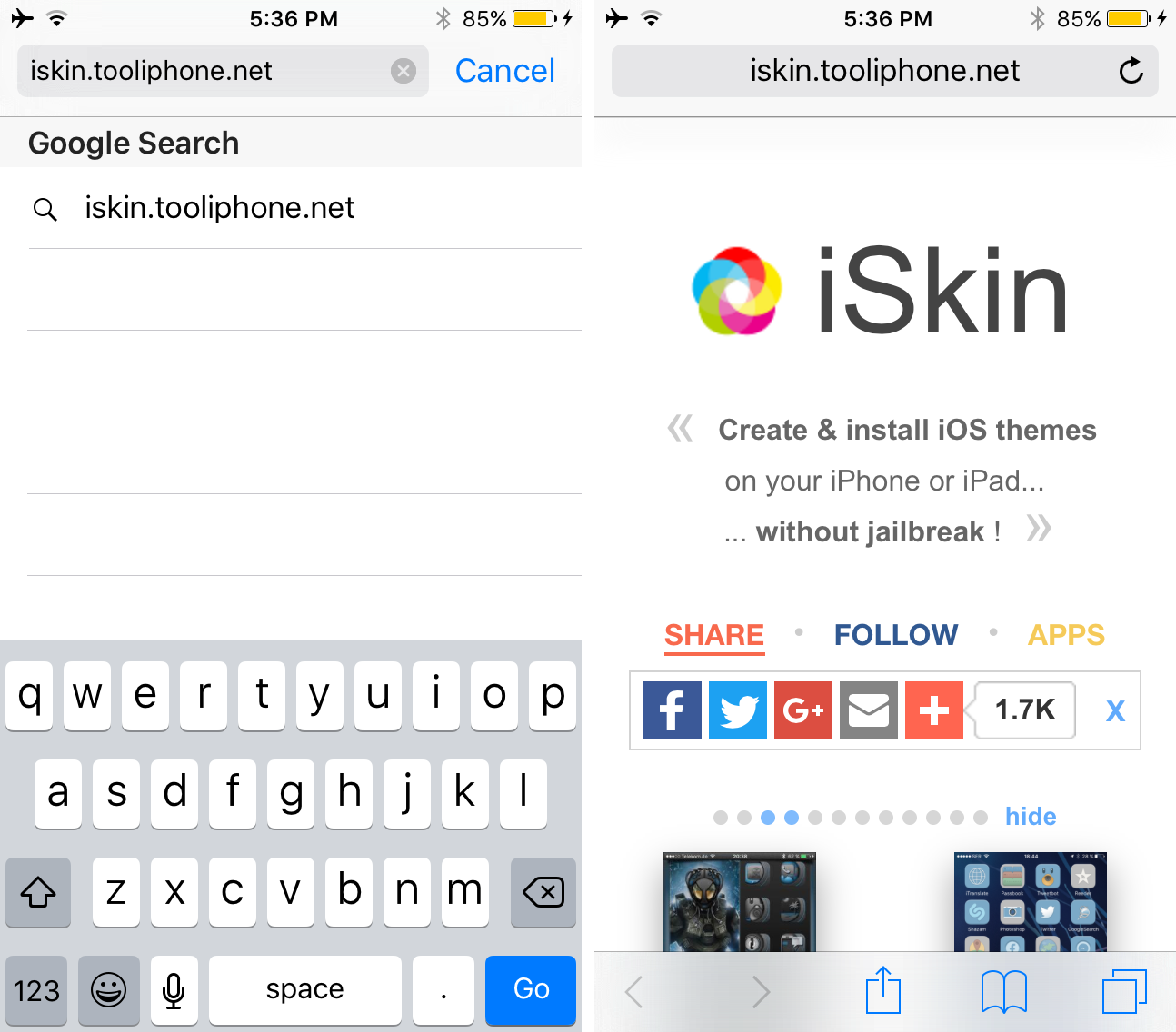 2) Scroll down and tap on the Browse all themes  button to reveal a list of themes to pick from: 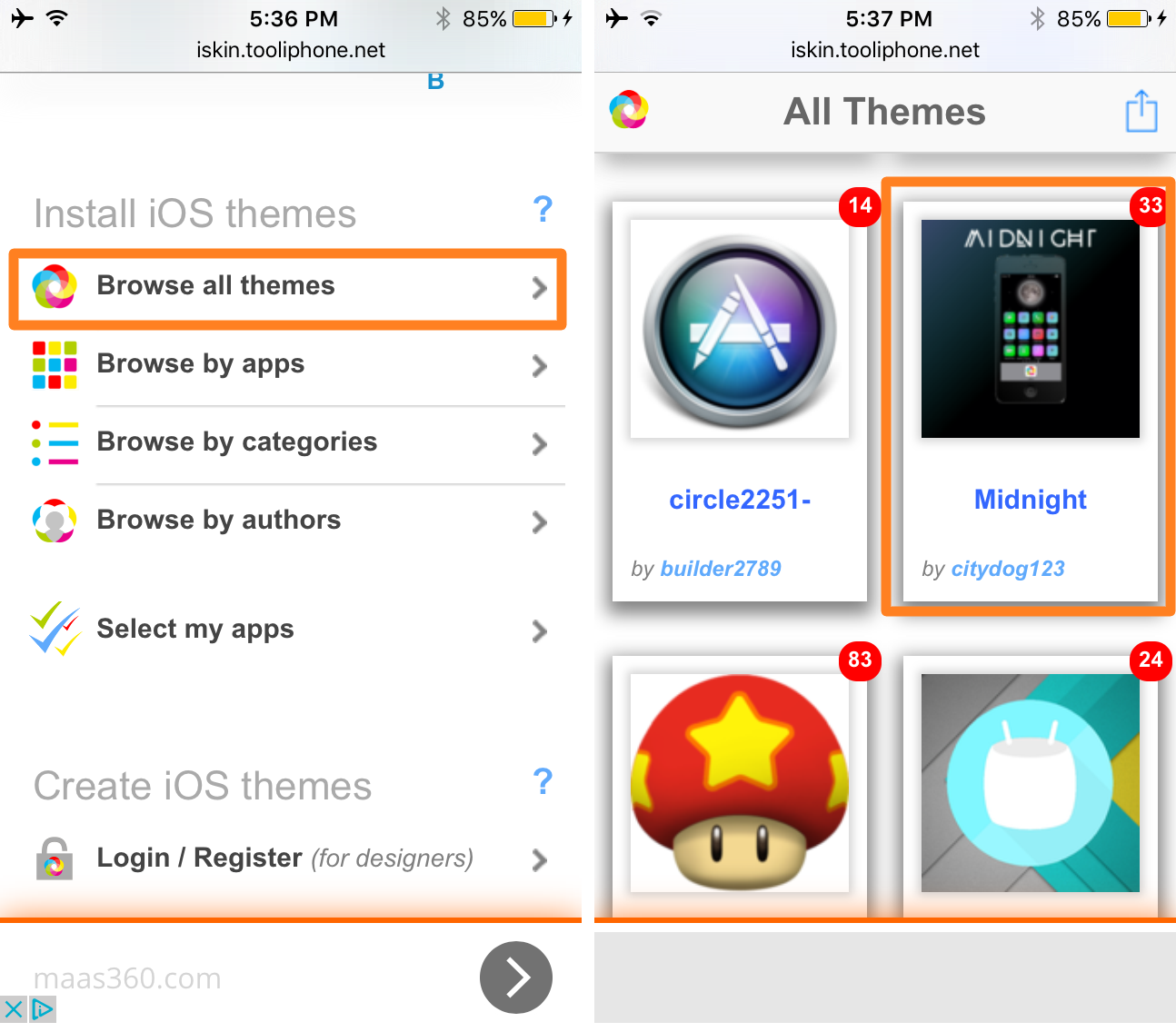 3) Pick a theme you want to install. We’ll be using the Midnight theme by citydog123 for our example.

4) Now you’ll want to tap on the Application icons button. This section lets you select what apps you want to theme on your Home screen.

5) Tap on every one of the app icons that you want to theme to select them, and make sure to give each app the name that you want it to have from the text fields that appear at the right of every app icon.

6) When you’re happy with the selection you’ve made and the names you’ve created, scroll all the way down and tap on the Install icons button.

7) A prompt box will tell you to wait a few seconds while the installation takes place, and then you’ll be asked to install a configuration profile.

8) Continue by clicking on the blue Install button. 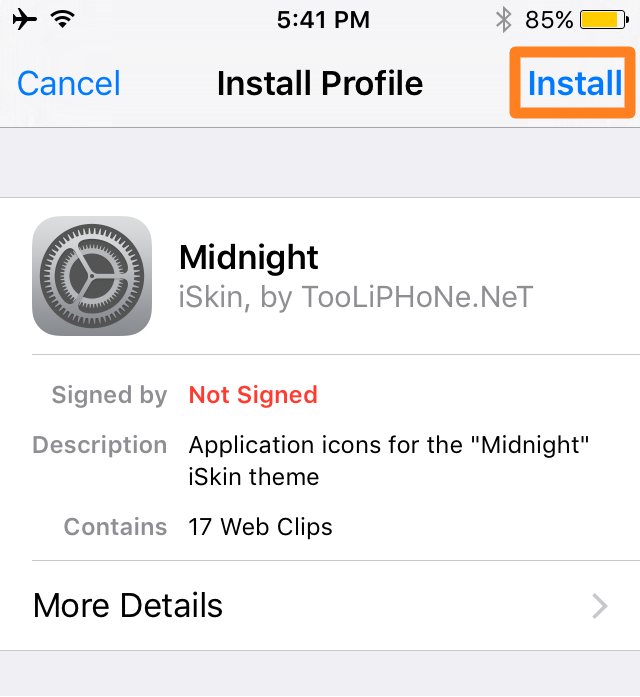 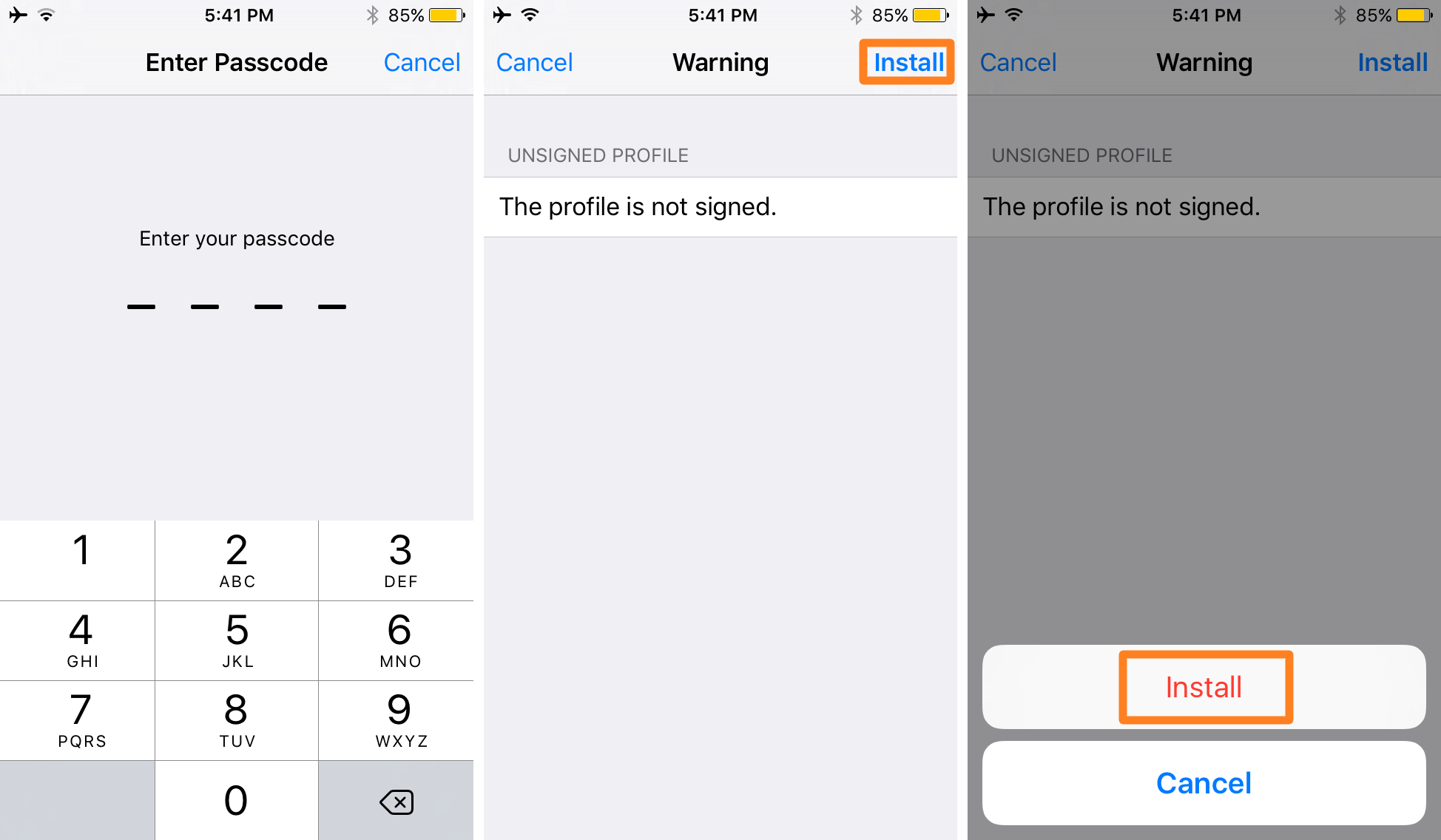 10) Once installed, tap on the blue Done button and you’ll be returned to Safari. 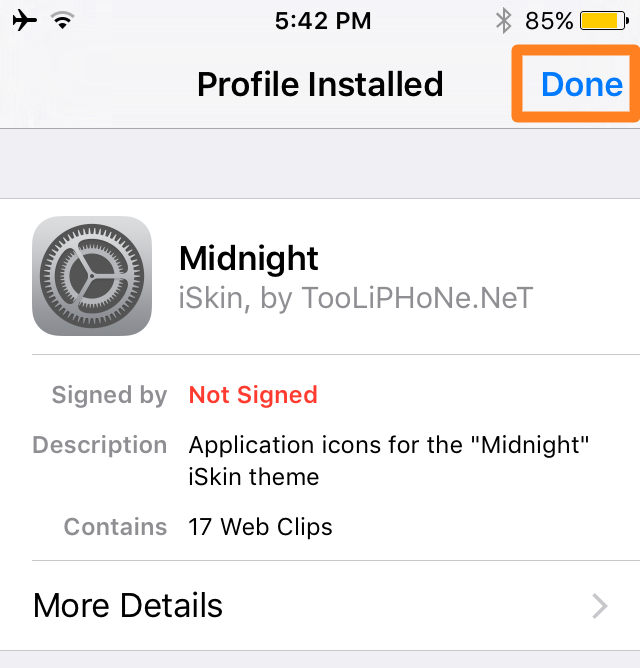 11) Once back in Safari, it’ll only take moments before the theme pack is installed on your Home screen. You’ll know things are going good if a green box is displayed that says Installation in progress… in it. 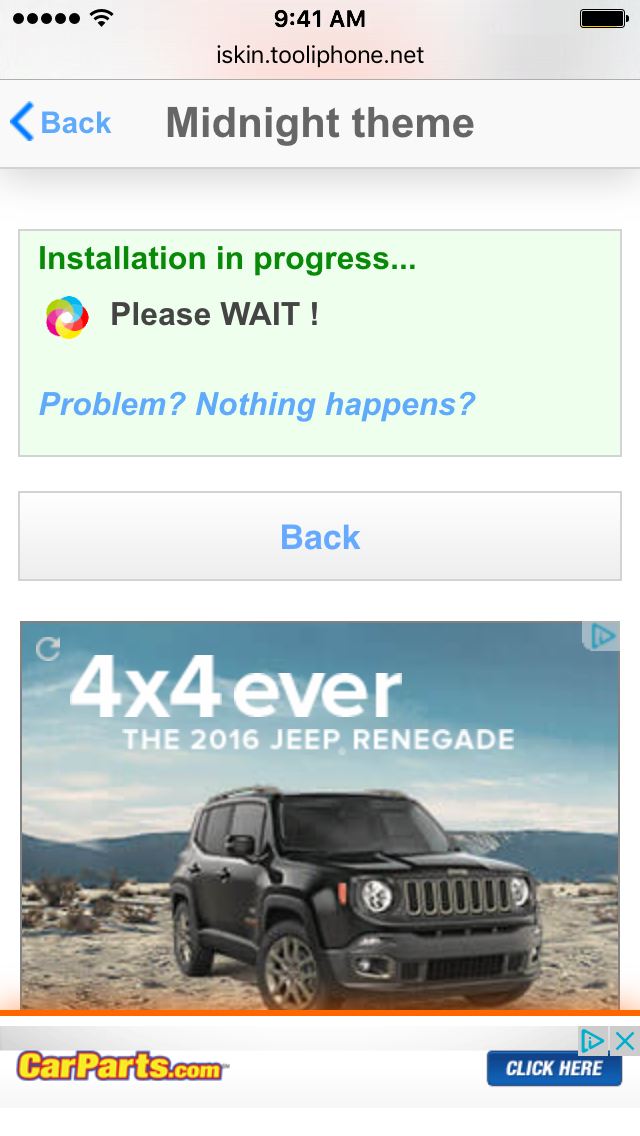 12) Wait a moment and then go to your Home screen and scroll to the last page. You’ll see all your new themed app icons:

That’s all there is to it! Now you can move these themed app icons anywhere you want them and put all your original app icons into a folder somewhere so they don’t distract you.

There are some things you need to know about using iSkin. We’ll talk about those below.

iSkin is going to want to install a configuration profile, which is untrusted. Obviously, you do this at your own risk. We tried it and everything seems to be alright, but some people are much more wary than I am about installing configuration profiles because they’ve got much more personal information on their devices than I do.

If you ever want to remove it because this makes you uncomfortable or you want to remove a theme you are using, you can always launch the Settings app and go to Settings > General > Profile and then tapping on the Delete Profile button under the profile you wish to remove: 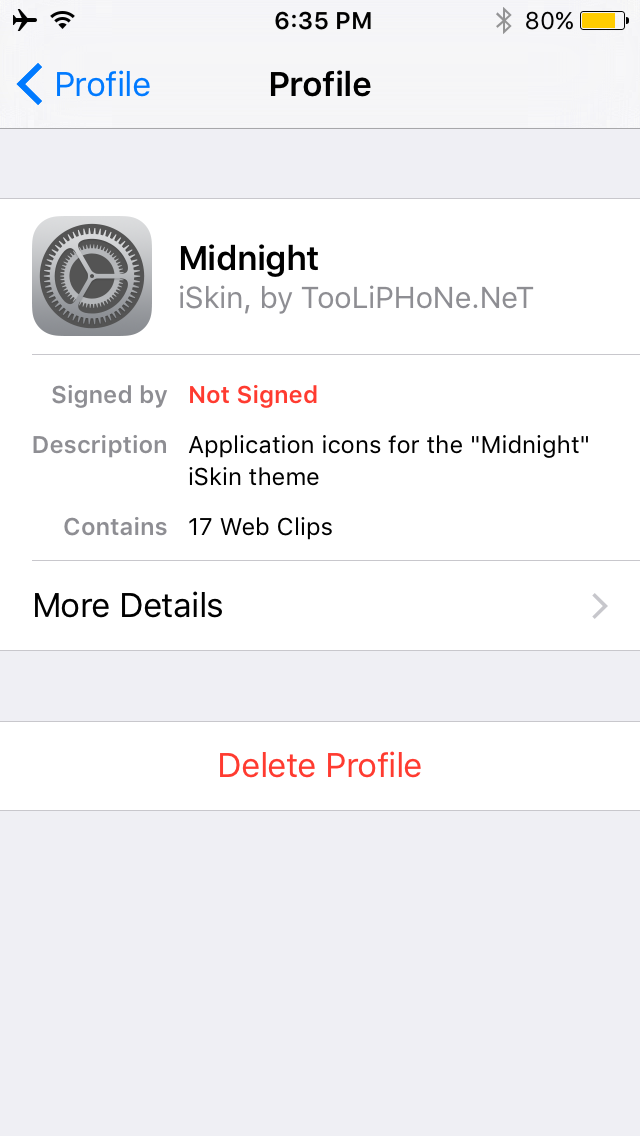 You can delete individual themed apps 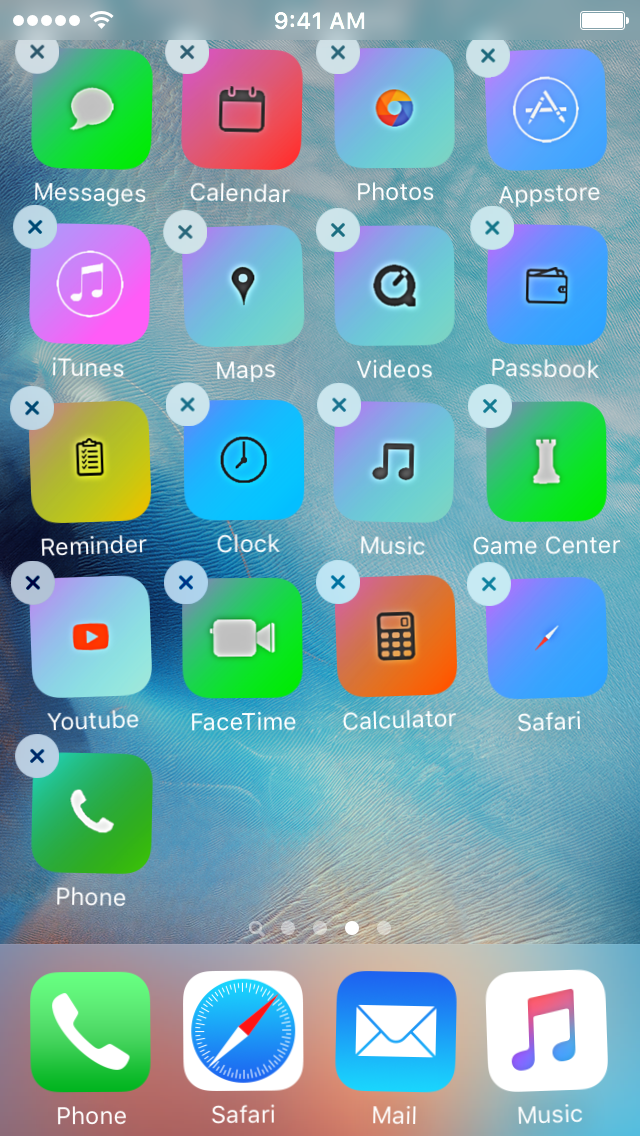 The shortcuts are web clip links

Because the shortcuts are web clip links, each time you launch an app you are actually launching a Safari link that then links to either the corresponding app. iOS 9 doesn’t like this that much, and it activates the breadcrumbs links in the Status Bar. 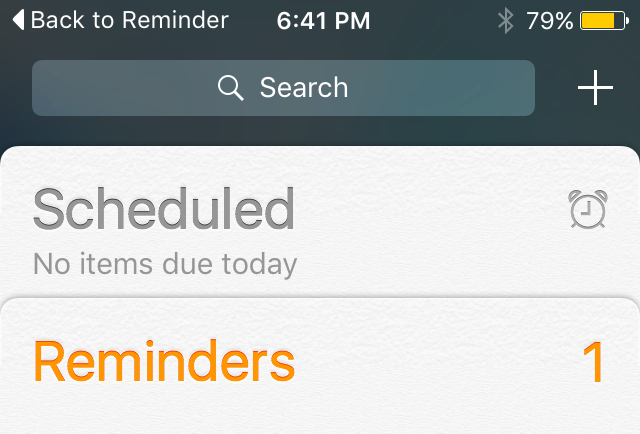 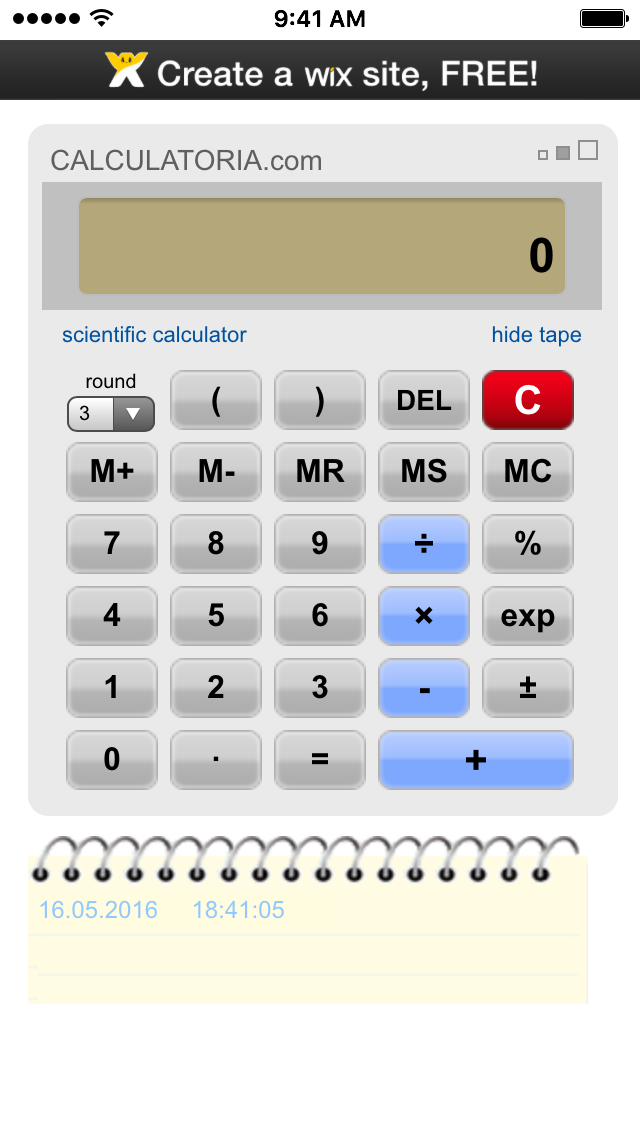 For some, this may be an annoying thing to have to get used to. Personally, it’s a make-or-break situation for me (I prefer my jailbreak, thanks!), but it’s still going to be a potential option for those that want to theme their devices without a jailbreak.

Wallpapers and more are included

In addition to app icons for your Home screen, some theme packs include wallpapers to go with them. Downloading wallpapers are optional, and you can keep your own wallpaper if you would like to.

Unfortunately, because of limitations set by Apple, you can’t theme UI elements like Notification Center, Control Center, and more.

Some themes are premium-only

Most of the themes are easy to download without creating an iSkin account, but some of them are premium and you’ll be asked to make a free iSkin account.

More themes are always being added

Developers work hard on these themes, and more are constantly being added as time goes by. You can also contribute if you’re a theme maker by following the directions provided on the iSkin website.

iSkin isn’t a perfect theming platform, but nevertheless, the ability to add themed app icons to your Home screen without a jailbreak is something that some people are going to really enjoy.

Will you be trying iSkin? Share in the comments below why or why not!

Source: iDeviceHelp – Thanks for the tip iDB, Antoine!