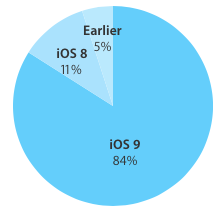 Last time we checked, iOS adoption rates stood at 84 percent of iPhone, iPod touch and iPad devices that were detected as running iOS 9. Moreover, eleven percent of hardware was on iOS 8 and the remaining five percent of devices used iOS 7 or older editions of Apple’s mobile operating system.

These stats were valid as of a little more than two weeks ago. The new numbers Apple just posted to its App Store dashboard for developers, however, paint a not-so-rosy picture for iOS 9 adoption.

As measured by the App Store, the same portion of devices were on iOS 9 (84 percent), iOS 8 (eleven percent) and ‘Earlier’ (five percent) on May 9 as they were on April 18.

This might indicate two things: either the remaining crop of iOS 8 users are not interested in upgrading to iOS 9, or iPhone sales are falling (and we know they are). It’s probably both—iPhone sales are extremely prone to seasonality so folks tend to hold off on upgrading to the latest model the closer we get to the next model launch.