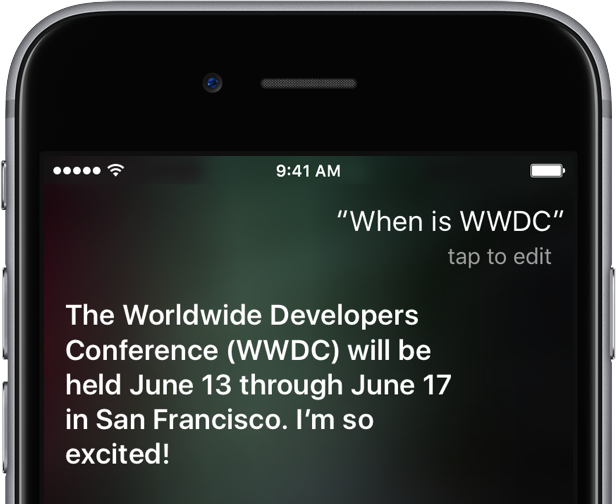 Benjamin Mayo of 9to5Mac has discovered that asking Siri about Apple’s summer developers conference has now started to produce a more concrete answer than before. Whereas asking Siri about the WWDC 2016 schedule would yield a “WWDC is not yet announced” response just earlier in the day, a backend change has updated that answer with the June 13-17 date.

While Apple has yet to announce the dates for WWDC 2016 in a more formal manner, other events have already been booked at Moscone West during much of Apple’s usual June timeframe, based on scheduling information available, leaving the June 13-17 timeframe as the only five-day slot available.

If Apple stays true to its form, we should expect Apple to kick off WWDC 2016 with a keynote on Monday, June 13. WWDC 2016 had not been officially announced on the main Apple website or via the company’s press section at the time of this writing, but we’ll make sure to update the post when the formal confirmation from Apple hits.

At WWDC, we’re expecting to get our first look at OS X 10.12 and iOS 10, see a preview of the next major versions of watchOS and tvOS and be informed about new features coming to iCloud and other software from Apple. We’re also keeping our fingers crossed for announcements pertaining to Apple Music and Apple Pay and maybe even some new Mac models or other hardware.