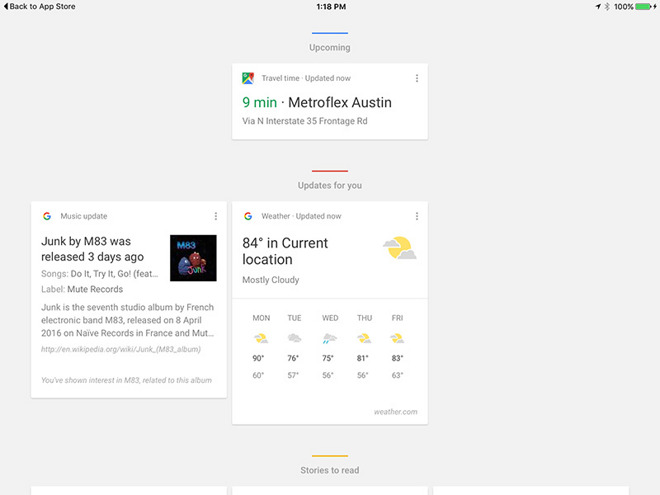 Google on Monday pushed a small refresh to its native Search app for the iPhone, iPod touch and iPad in the App Store. Bumped to version 14.0, the software features an optimized layout of the Now cards to make better use of the iPad’s screen real estate.

“Updated structure for Now cards on iPad, designed to keep your content organized and better surface the info you need most,” reads a line from Google’s release notes accompanying the 65.4-megabyte download.

Your Now cards are now organized into different categories.

The Upcoming section at the top of the screen includes your calendar events, regular commutes and more. Right below are the Stories to Read and “Updates For You sections that provide personalized data such as weather forecasts and music recommendations.

You can scroll down to reveal more cards or tap a card to get more information.

If you haven’t tried this app yet, you’ll wholeheartedly recommended to take it for a spin.

In addition to a spiffier interface, the native apps lets you search using your voice and take advantage of Google Now and Now cards in select markets. Just open in-app settings and tap the Google Now option to get started.

Google Now, for those who are not familiar with it, is a feature that analyzes your data on Google, including emails, messages, calendars, contacts and more, to keep you up to date on the things you care about, before you even ask.

The native Google app requires an iPhone, iPod touch or iPad with iOS 8.0 or later.

Download Google free of charge on the App Store.