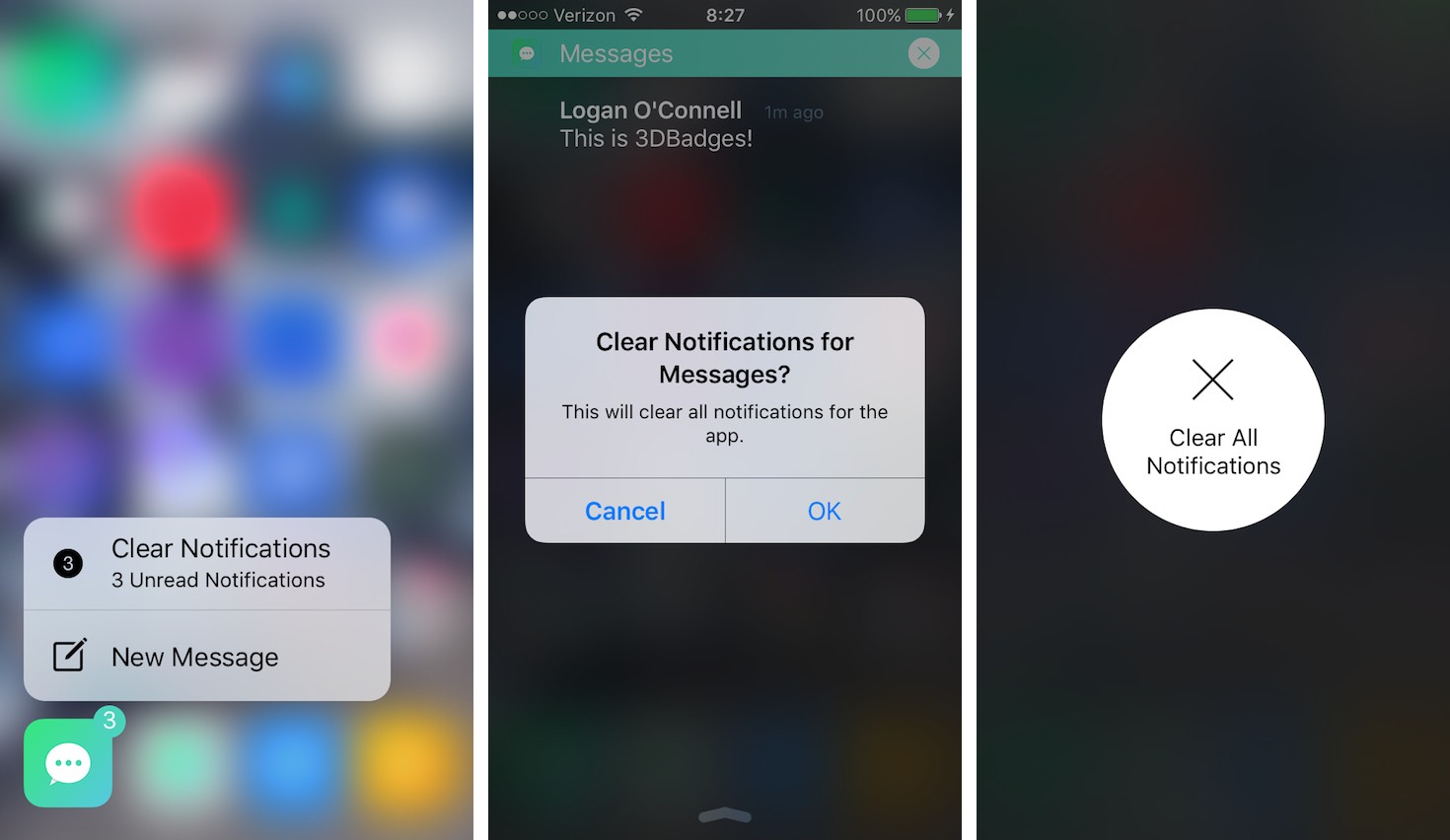 Those rocking a jailbreak that have been looking for the perfect all-in-one 3D Touch notification-clearing tweak for their iOS device(s) need not look any further than a new jailbreak tweak release called EasyClear, which is now available in Cydia’s BigBoss repository for $1.49.

This tweak makes use of the 3D Touch display on the iPhone 6s and iPhone 6s Plus to let you dismiss notifications universally throughout iOS. Whether it be a badge on an app icon from the Home screen, or one or more notifications from Notification Center.

Who will EasyClear appeal to?

EasyClear is a tweak that will make the lives of those with seemingly endless notifications easier. It allows you to clean up your Home screen of nuisance app badges, and it also makes it easy to clear notifications from your Lock screen or Notification Center in one fell swoop.

If you have apps that are always littering your Home screen, Notification Center, or Lock screen with notifications you could care less about, this tweak will help you manage them more quickly and with a funner gesture.

Although the tweak works best on the 3D Touch display, you don’t have to have an iPhone 6s or iPhone 6s Plus to use this tweak because it has functionality built into it to make it work on older devices like the iPhone 6 and earlier.

With just a quick 3D Touch gesture (or alternative gesture), all of the unimportant notifications can be flushed away so you can focus on the ones that truly matter to you for later.

If you have a notification badge on an app, and you want to clear that badge, all you need to do is perform a 3D Touch gesture on that app icon and you’ll get the Quick Actions menu. From here, you’ll find a new “Clear Notifications” option which will hide the badge from the app icon. You can do this for any of your apps, and other app notification badges will remain on your Home screen for your attention in the future.

There’s more to EasyClear, but to explain what else there is, we’ll have to discuss the tweak’s extensive configuration, which we’ll do in the next section.

Configuring EasyClear for your needs

EasyClear has a long preferences pane, which is good for users who want to have more control over how the tweak works, but it can also be exhausting for users that want a tweak to work out of the box without having to configure extensive settings.

Fortunately, most of the settings are set to defaults that make the tweak usable out of the box, and you only have to configure the settings if you really want to.

I think EasyClear is an excellent choice for anyone seeking to unify notification clearing and the 3D Touch gesture into one useful step.

It’s great because it works in three important interfaces – the Lock screen, Notification Center, and for badges on the Home screen. It’s particularly nice that you can choose to clear individual app notifications based on where they’re coming from, or clear all of them altogether.

I also believe it’s great that the developer put the time and effort into making the tweak compatible without the need to use third-party tweaks like revealMenu or Forcy. This helps those with older iOS devices that don’t support 3D Touch to be able to take advantage of great features that only the jailbreak community could produce at this early of a time.

On the downside, I did notice that when you respring your device, app badges have a nasty habit of reappearing and I would hope this is something the developer could fix in a future update.

For what it is, EasyClear is a solid jailbreak tweak for getting rid of unwanted notifications and making use of a new feature in Apple’s flagship iPhones. At just $1.49 in Cydia’s BigBoss repository, it won’t break the bank either.

What are your thoughts on EasyClear? Share in the comments.