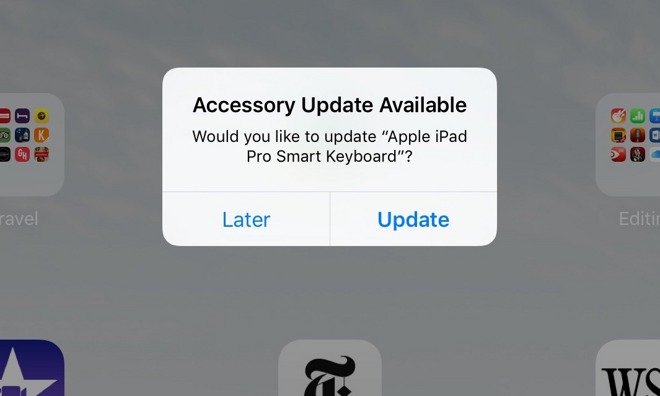 Apple has issued its first firmware update for the iPad Pro’s $169 Smart Keyboard accessory. After attaching a Smart Keyboard to their iPad Pro, users will see an iOS prompt informing them of the availability of the new software. They can postpone updating the Smart Keyboard update or select to apply the new firmware immediately.

As reported by AppleInsider, the new firmware software for the accessory is delivered as an over-the-air download and is transferred to the Smart Keyboard through Apple’s new magnetic Smart Connector on the iPad Pro.

“The update process takes only a few seconds before it’s complete,” remarks the publication. “There are no accompanying release notes to detail exactly what the update changes or improves.”

MacRumors notes that the firmware update improves the connection stability between the Smart Keyboard and iPad Pro and fixes an unexpected wake-up issue some users have faced recently.

The accessory is unavailable for use during the update process, with the progress bar showing how much of the process has been completed. The iPad Pro’s magnetic Smart Connector is capable of transmitting both power and data in either direction.

The forthcoming iOS 9.3 software update implements the ability to deliver accessory firmware updates through the iPad Pro’s Smart Connector. Back in January, German developer Stefan Wolfrum reported being greeted with an “Accessory Update Available” prompt after plugging a Logitech Connect keyboard case into his iPad Pro.