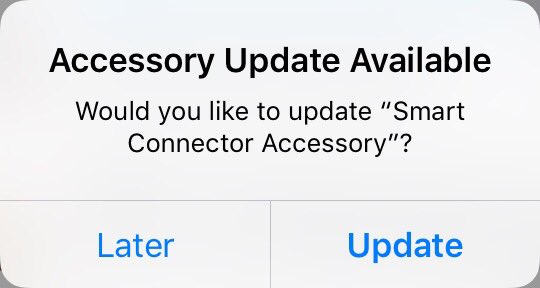 Aside from headline features such as Night Shift mode, new 3D Touch shortcuts, Notes improvements and more, the most recent beta of iOS 9.3 has been found to allow the iPad Pro to update accessories’ firmware through its Smart Connector.

As noted by German developer Stefan Wolfrum and relayed by Oliver Haslam over at Cult of Mac, Wolfrum was greeted with an “Accessory Update Available” prompt after plugging a Logitech Connect keyboard case into his iPad Pro.

“Apparently, iOS 9.3 beta 2 is able to update the firmware of a Smart Connector keyboard—and actually did this with the Logitech Create keyboard I’ve currently connected to my iPad Pro!” Wolfrum wrote on Logitech’s support forum.

During the updated process, the progress bar shows how much of the update process has been completed. It took under a minute to complete the process, during which time the accessory was unavailable for use.

The new firmware, according to Wolfrum, has solved a few annoying issues with Logitech’s keyboard case: flaky connectivity, lagginess and keystrokes not registering properly.

This is actually a very cool feature, one that also begs the question: how does iOS know that a firmware update for a third-party accessory is available?

I’m guessing that iOS 9.3 beta 2 does accessory firmware updates via the Software Update infrastructure. Apple did a similar thing with the release of the OS X 10.6.5 Snow Leopard update, which permitted printer driver updates for a variety of models through the Software Update mechanism.