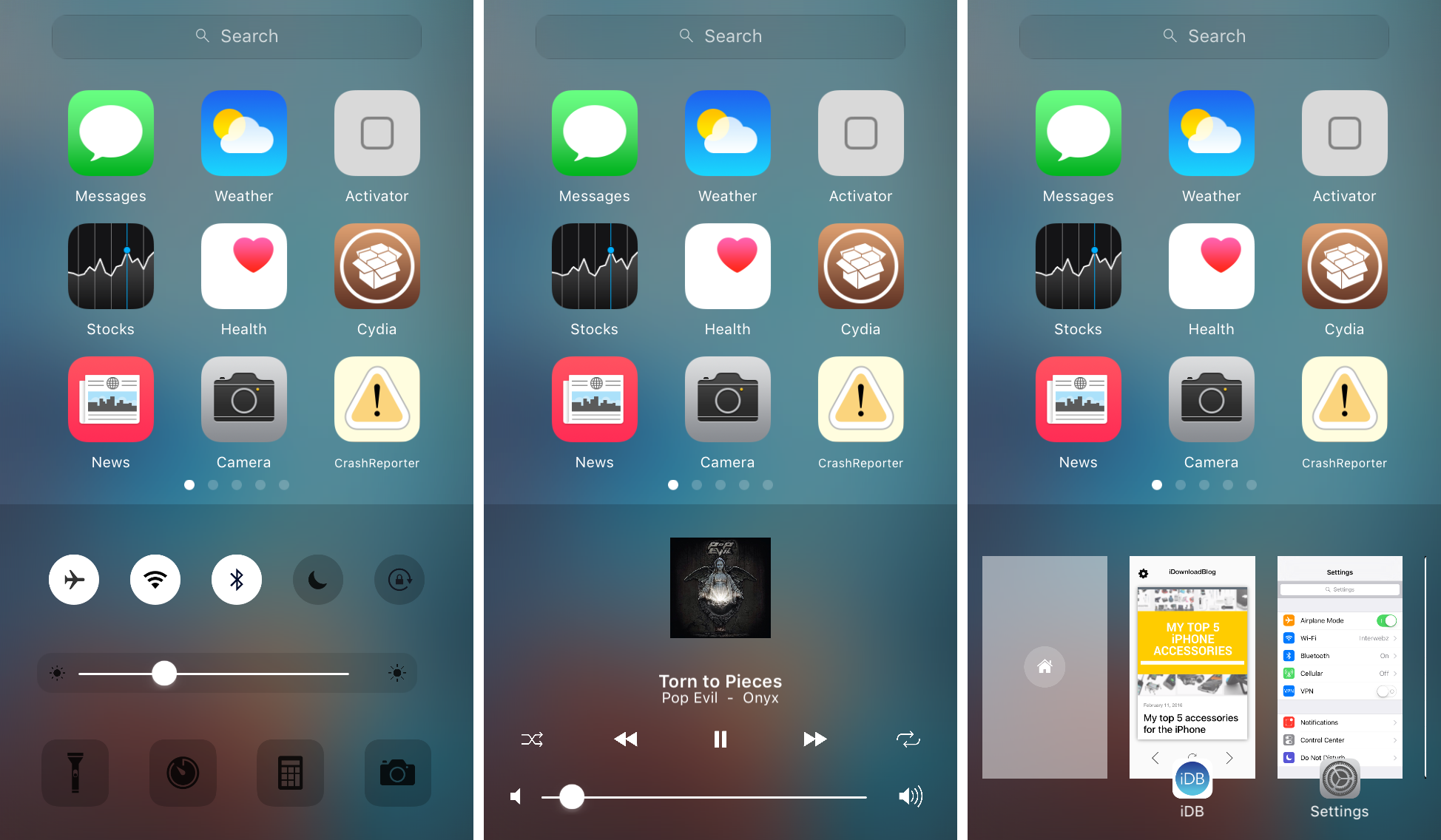 In iOS, the Control Center and App Switcher interfaces are separate from one another and this means to get to one or another, you have to use a different gesture. It seems like some improvements could be made by merging the two interfaces into one, as we’ve seen with the popularity of previous jailbreak tweak releases such as Auxo 2 & 3.

A new jailbreak tweak called Zentrum is now available in Cydia’s BigBoss repository for $1.99 and it introduces users to an all-new omni-interface for multitasking, viewing music controls, and accessing system toggles & shortcuts, but it even bakes into the mix a quick app launcher, which you can configure to your liking.

The idea behind Zentrum

Zentrum is essentially combining two features of iOS that are normally separated, making it easier for users to access the features and settings they need to get to. It doesn’t replace the App Switcher or Control Center outright because you can assign an Activator gesture to the tweak if you want to, but by default it’s opened by double-pressing the Home button just as you would if you were opening the basic App Switcher.

By compressing all these features into a single interface, you feel a little more organized, so I can definitely say that after trying Zentrum, I’m happy with the look and feel of the interface for this reason. Everything is compact, and you don’t have to visit multiple interfaces in iOS to get things done.

The main interface of Zentrum you’ll see after installing it and attempting to open the App Switcher is Zentrum’s App Switcher interface combined with the app launcher and the search bar. It’s already a stunning new user interface, but just wait until we show you what’s inside… 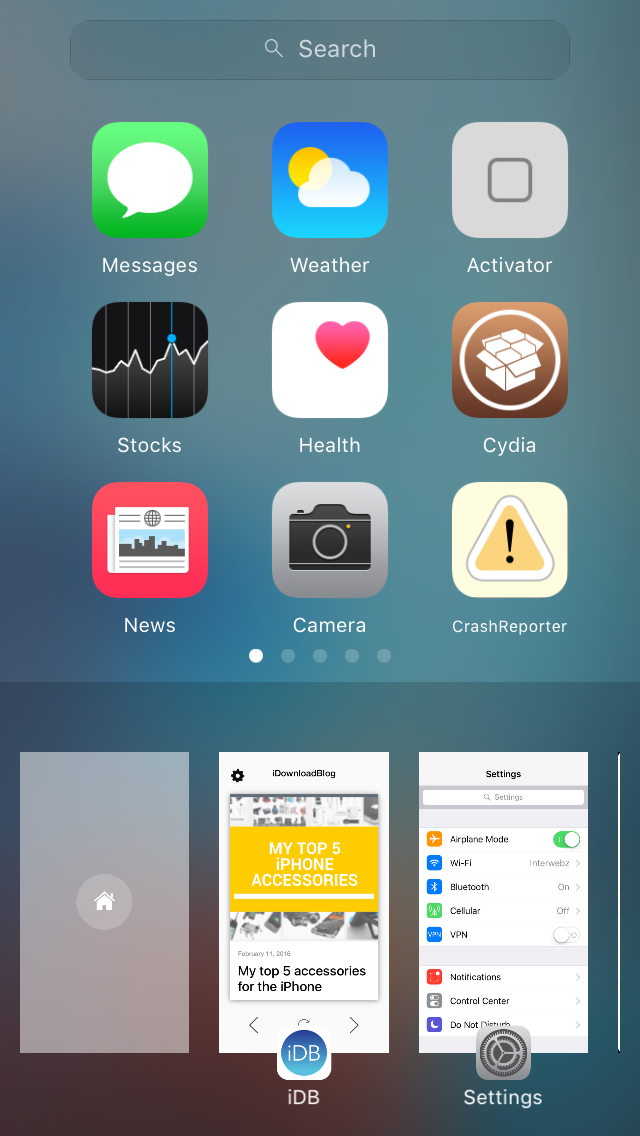 The apps you see at the top are shortcuts to all the apps on your device. You can page through all of them, but you can also choose what order these apps are arranged in so your favorites are shown first. It’s essentially like having a miniature Home screen in your App Switcher.

The apps you see at the bottom are the apps you’ve used recently, and these are essentially the same apps you’d see if you opened your App Switcher. You can swipe up or down on any of these app preview cards to remove them from the App Switcher when an app is acting funky and you want to restart it. The animation for closing apps is clean and fluid:

Moreover, you can tap and hold on the Home screen card to remove all of your apps from the App Switcher at one time.

At the very top of the interface is the search bar, and with this you can search through your various installed apps. What’s nice about this feature is the beautiful, fluid animation you see as you type for apps to search for. The apps that don’t apply to your search query are pleasantly wiped away from the app shortcuts menu:

If you scroll over to the left of the App Switcher interface, you’ll see your music controls. This interface shows the album artwork of whatever music you have playing, and includes the volume slider and play, pause, forward, back, shuffle, and repeat buttons for navigating your music. This music interface is compatible with third-party apps, such as Spotify; in fact, we’re using Spotify in our example. 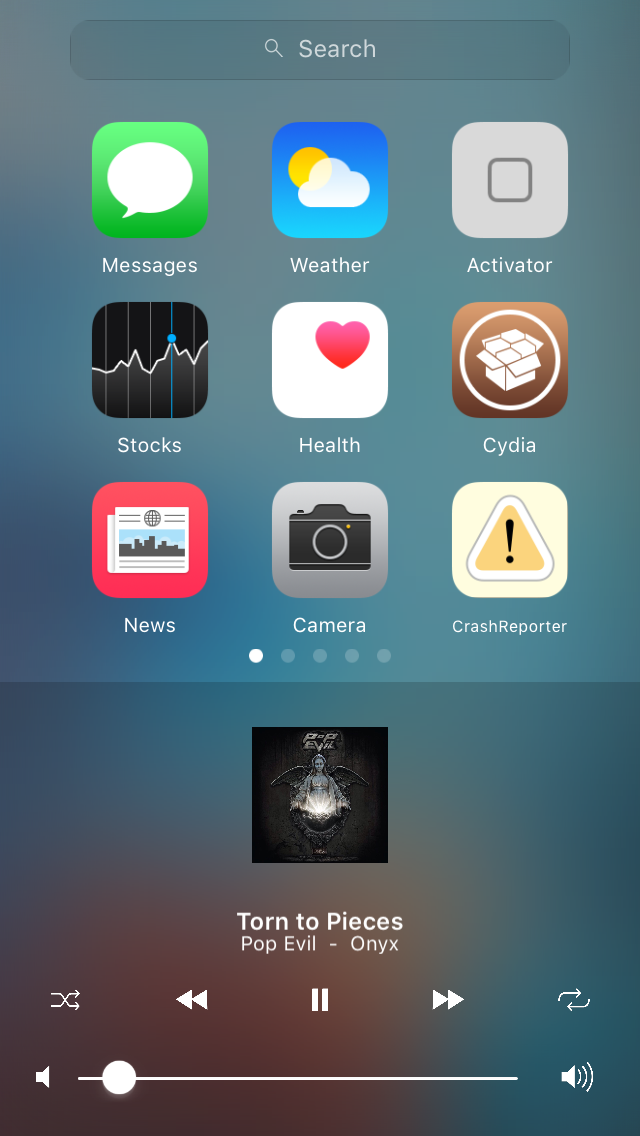 If you slide one more page to the left, you’ll find your Control Center toggles and shortcuts, as well as the display brightness slider. 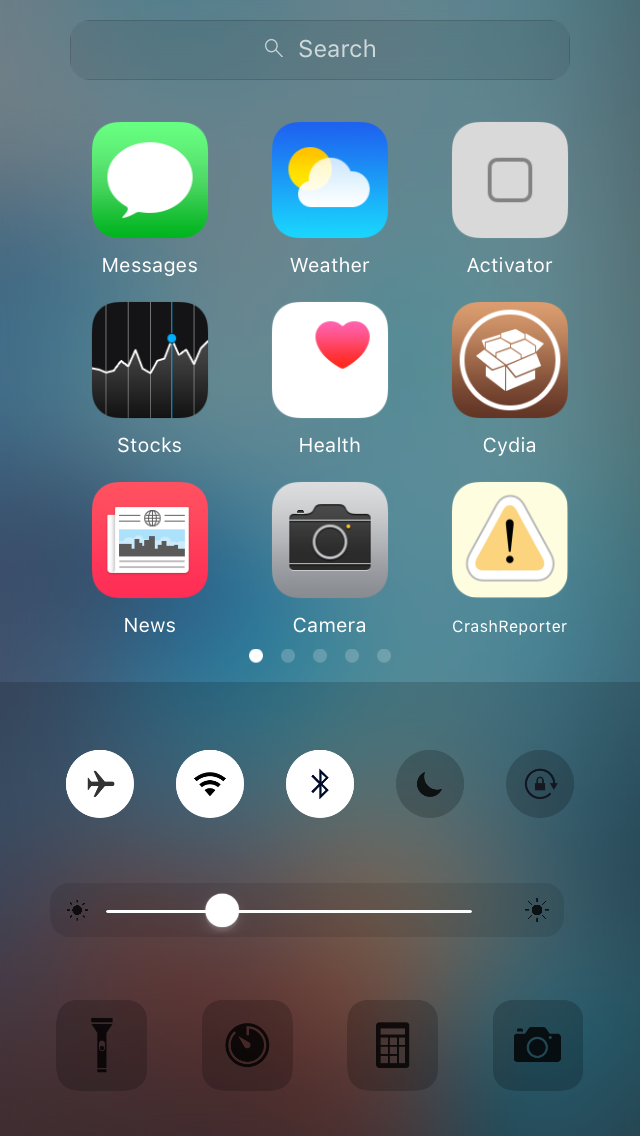 Configuring Zentrum to your liking

Zentrum adds a preferences pane to the Settings app where you can modify the look and behavior of the tweak so it does what you need it to do. We’ll take you through all of those settings below and explain what each setting does. 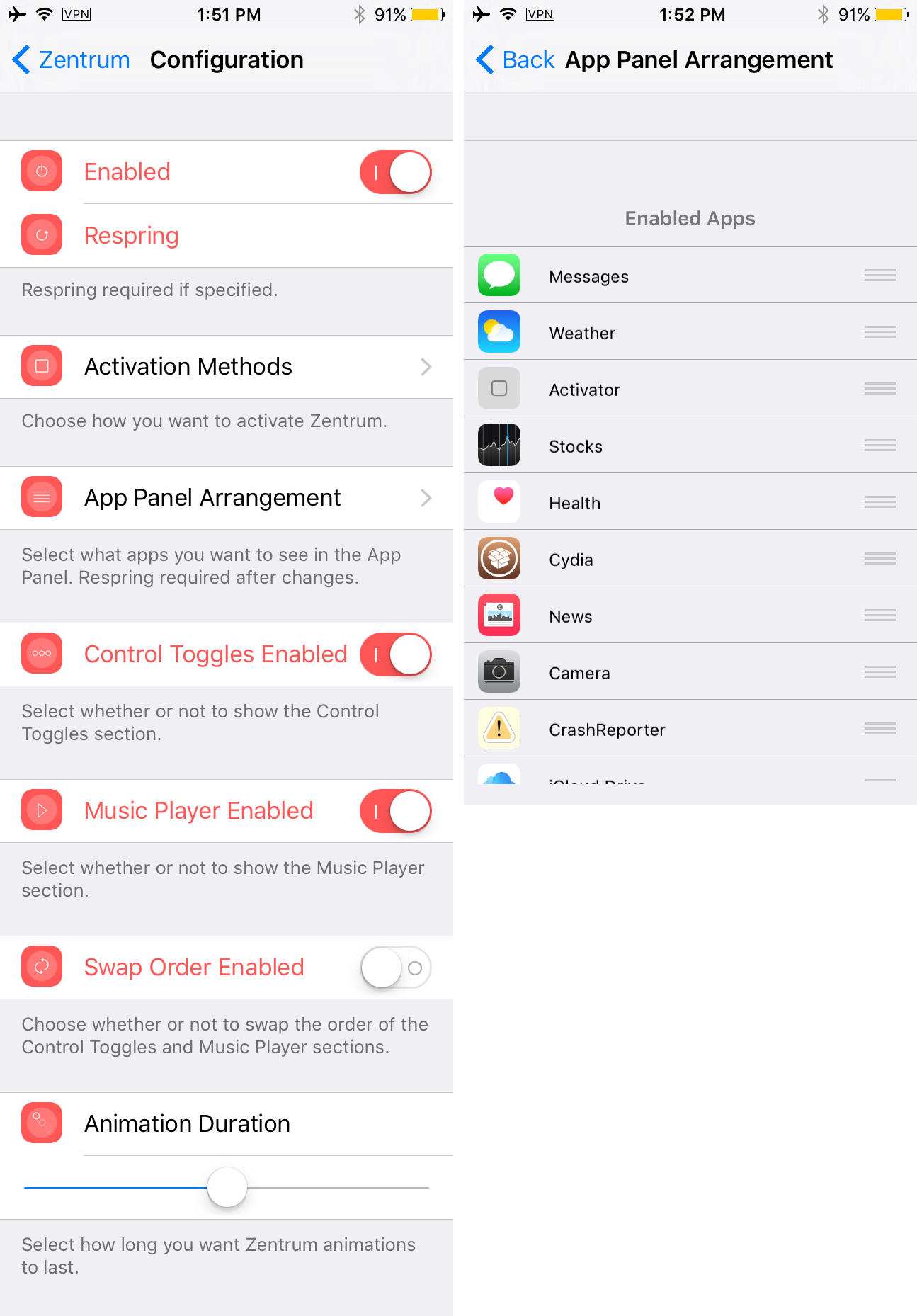 Here, you can enable or disable Zentrum on demand with the kill switch, and you can respring your device to save any of the options that you make changes to. There are also other settings available to you, such as the following:

App Panel Arrangement: This option lets you configure the appearance and order of the apps in your app launcher. You can drag apps into any order that you wish by using the grabber at the right of the app names (the three dark gray lines) and then dragging them in any order in the list, and you can even prevent certain apps from appearing in the app launcher by dragging them into the “disabled” section. All apps are automatically placed in the “enabled” section by default.

Control Toggles Enabled: This setting lets you enable or disable the Control Center-style toggles and shortcuts page in the Zentrum interface, but leaves the music controls and App Switcher where they are.

Music Player Enabled: This setting lets you enable or disable the music controls page in the Zentrum interface, but leaves the Control Center-style toggles and shortcuts page and the App Switcher where they are.

Animation Duration: This slider lets you adjust the speed of the animations you see when using the search function and when closing out of apps in the App Switcher.

My thoughts on Zentrum

The idea of combining the App Switcher and Control Center may not be a new one, but Zentrum does a great job of it and even includes other useful features, such as the app launcher, which I think is a great way to get to your favorite apps quickly with the use of your Home button or Activator action.

The animations are smooth and fluid, and although they are somewhat lengthy, the developer includes a slider so you can fine-tune them to be as fast as you want them to be.

Nonetheless, I’m impressed with the tweak’s appearance and functionality, so if you were to ask me if I’d recommend it to someone looking for a new App Switcher experience for iOS 9, then I’d most likely say yes.

Zentrum, which is a $1.99 purchase from Cydia’s BigBoss repository, combines a lot of useful features into one easy-to-access interface invoked by your Home button or with Activator. It has a very clean interface with impressive features and presentation, and makes a great addition to jailbroken iOS 8 or iOS 9 devices. What’s more is the tweak works with iPads as well as iPhones and iPod touches.

What are your thoughts on Zentrum? Share in the comments below.