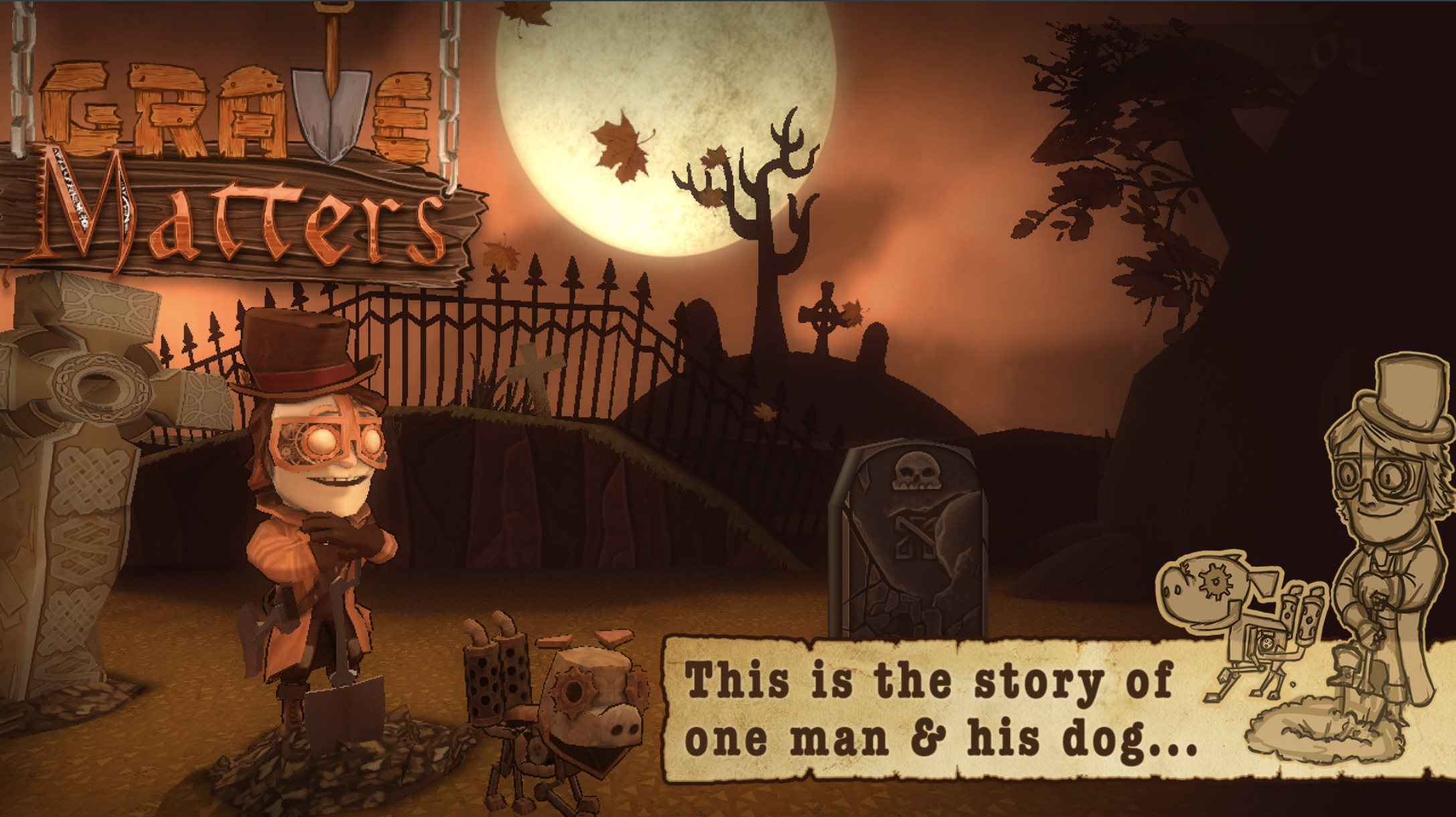 Grave Matters is a Steampunk themed graveyard adventure where players dig up energy cells while trying to avoid being dragged to the underworld by a nasty machinelike Steamborg. We reviewed the game over a year ago when it first launched.

The game’s developer, Ideonic, recently made a special edition that is exclusive to Apple TV 4. This big-screen version has updated graphics, a new control system, and a new soundtrack, while still maintaining the same, fun mechanics of the original.

The ATV 4 version has all the same, wonderfully steampunky graphics as the iOS version. The cut scenes, which were some of my favorite parts, are just a beautiful on the television screen, but in a bigger and better way.

Players must dig up dirt piles in a sepia toned grave, looking for energy cells while trying to avoid the Steamborgs. The Minesweeper mechanic comes into play when you unearth a skull. 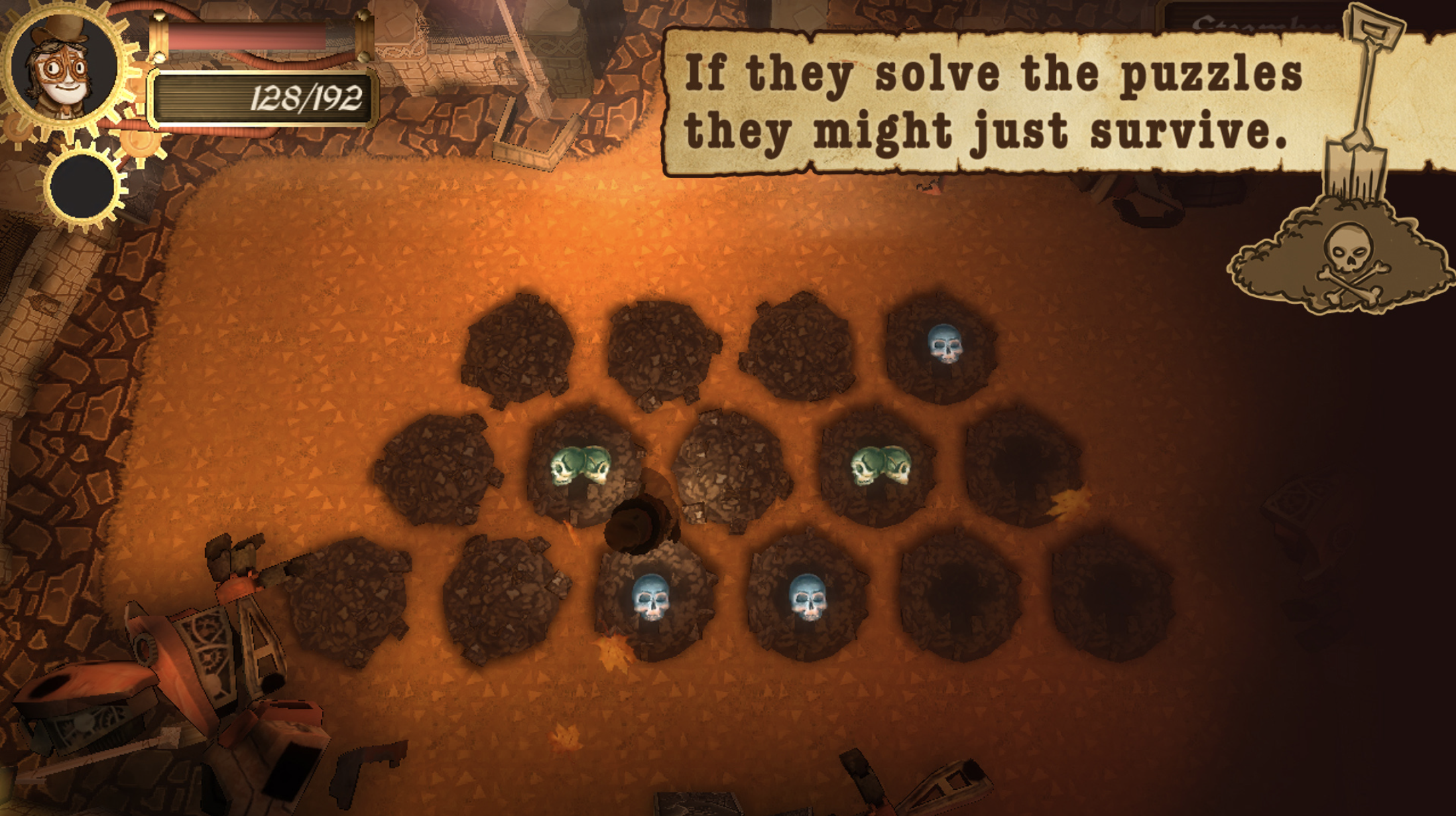 The skull is a warning that a Steamborg is in one of the adjacent piles of dirt. Avoid digging up those piles until absolutely necessary.

As you uncover additional piles, you might come across more energy cells or more skulls. If you’ve uncovered the gravesites properly, you can estimate where a Steamborg is hiding and place a flag (or in this case a cross) on it as a reminder not to dig it up.

You must find enough energy cells to unlock the graveyard gate. If you are successful, you can leave the puzzle immediately, or attempt a higher score by trying to find all remaining energy cells. Of course, the more you dig, the better chance you have of finding a Steamborg.

Players can use a special item to zap a Steamborg out of existence, or rely on the protagonist Harey Burke’s trusty rusty steam-powered pup, Bobby (Incidentally, I’m almost positive that the dog’s name used to be Billy). Bobby will sniff out danger and warn you to stay away from certain areas of the graveyard. He will also sacrifice himself and jump into the grabby arms of a Steamborg in order to give you one more chance to get through the gates. 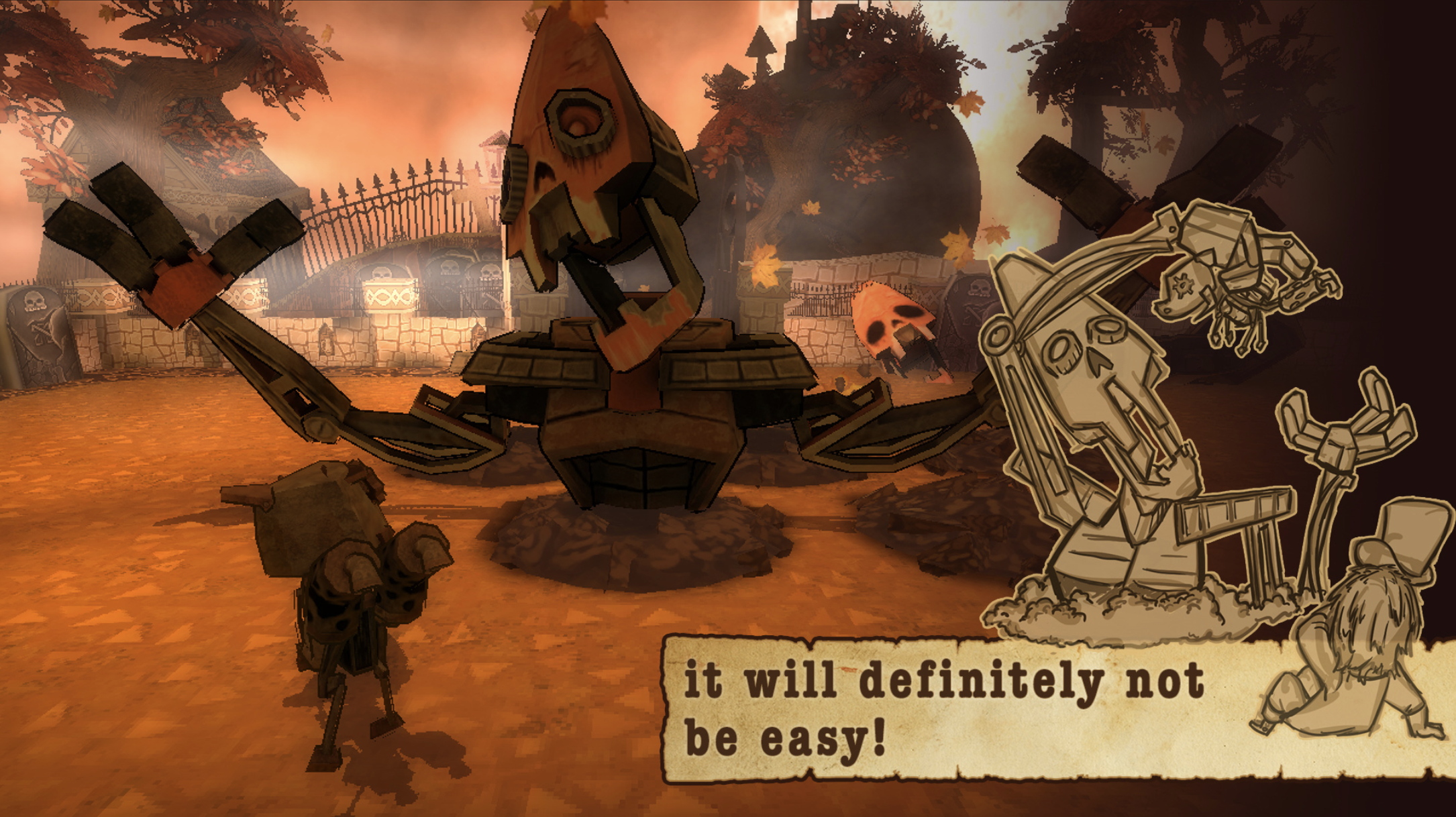 On Apple TV, the game play is pretty much identical with the notable exception of the controls. On iOS, players simply tap the screen where they wish to go. However, on Apple TV, players must swipe to move and click to select using the Siri Remote touchpad.

Unfortunately, the controls are a bit buggy. Harey never goes the direction you want him to the first time, and sometimes you’ll set a flag when you meant to dig a grave. This is a bit of an issue because you must complete each puzzle within a certain amount of time, and dealing with poor movement has an affect on your success.

This version of Grave Matters is only available on the tvOS App Store at a cost of $4.99 with zero in-app purchases. The iOS version has been updated as a free-to-play game. So, try it out on iOS and see if it is something you’d like to buy for your Apple TV.