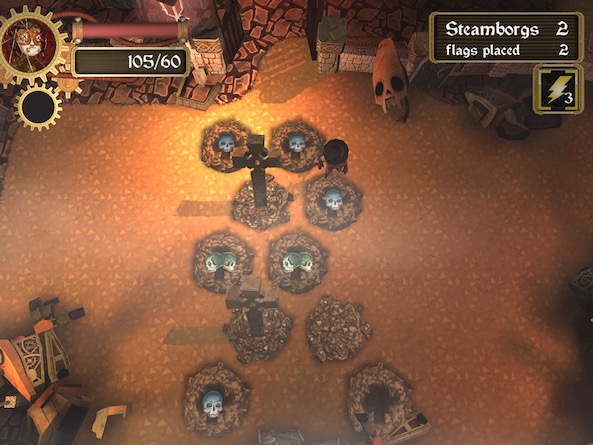 At this point in the year, I’ve filled my brain with as much horror movie content as possible. For the entire month of October, I’ll watch nothing but scary movies or television shows. Because of that, I am hyper aware of anything relating to images of death, monsters, or the undead.

When Grave Matters popped up in the App Store, I was drawn to it like a magnet. This necropolis themed puzzle game has all of the elements for a spooky good time. We have a full game review of Grave Matters for your reading pleasure.

I love the way this game looks. It features a top hat and goggles wearing gravedigger named Harey Burke and his steam-powered pet, Billy. The sepia tones highlight the fall like atmosphere and the old-timey font makes you feel like you are digging up bones in the 1800s. The eery sound effects are good enough to be piped through a hidden speaker on your front porch to scare trick-or-treaters on Halloween night.

The game is a top-down puzzle where you must tap to dig up a grave and reveal its contents. You may unearth energy cells, skulls, or those irritating Steamborg, which are basically mechanical zombies.

Players go from one grave to the next, collecting as many energy cells as possible while trying to avoid getting taken to the underworld by the Steamborgs. It is a survival game of sorts because you play until you die. Once you do, you must start over from the last chapter you have successfully completed. And it is not exactly a cakewalk getting through an entire chapter. 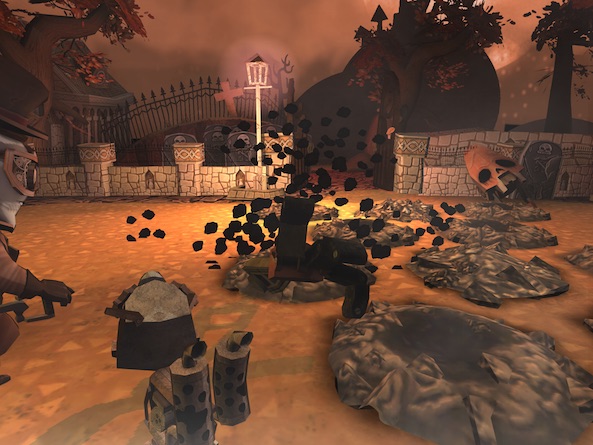 The idea behind the puzzles in this game is not entirely unlike Minesweeper. Players reveal the contents of a grave by tapping on it. If a skull is inside, that means one of the nearby graves contains a Steamborg. You can quickly rule out safe graves if nothing but an energy cell is discovered. Some graves will have two, or even three skulls. That means there are two or three adjacent graves with Steamborgs in them.

The goal is to collect enough energy cells to unlock the gate. Energy cells are also used to buy special add-on powers, like a copper hat, which increases your chances of avoiding the metal grasp of the Steamborg. You will earn extra points if you clear the cemetery of all energy cells. However, this also puts you more at risk of digging up a Steamborg.

You will have a robotic companion with you that can sniff out danger. Billy the steam-powered pup will light up dangerous areas on the screen so you are better able to determine which graves to avoid. Billy is also a loyal companion that will take the fall for you when a Steamborg appears. He will jump in front of the monster’s reaching grasp and allow it to take him. The problem with that is Billy doesn’t come back from the dead and you’ll have to finish the act without him.

Harey has some powers of his own, too. You can call on divine lightning to strike one random Steamborg dead, which helps better your chances of getting out alive. Like Billy, your divine lightning does not replenish and you only get three per act.

On each level, there is a certain number of Steamborgs hidden underground. The placement of the graves is always the same, but the contents are random. So, you may avoid a Steamborg one time through, but when you replay it, the monstrosity will be in a completely different place.

There are four acts and a prologue for a total of 70 levels of puzzle fun. Each time you play, your chances of survival are reset and levels get harder with added Steamborgs in cemeteries. 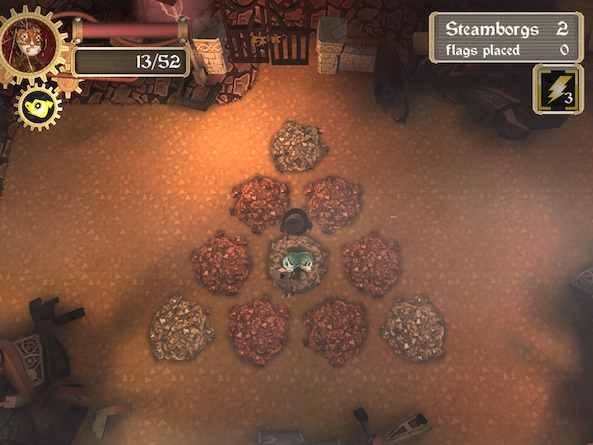 The graphics during the cut scenes are pretty fantastic. The game starts with a cinematic mini movie that looks impressive on the iPad Air.

I am a fan of Minesweeper and I love that this game lets you experience a similar puzzle mechanic set to a steampunk theme.

I noticed a minor lagging experience. It wasn’t too bad, but basically, whenever the cut scene would zoom in, a few frames would skip. It is possible that this game is optimized for the iPad Air 2 and my “ancient” iPad Air is just too poorly equipped to handle the graphics (/joke).

Grave Matters is on sale for $0.99, which is an incredible price for the game, which is normally $3.99. Even at the premium price, this title is a great buy. The replay value is extremely high since you can play it over and over again without experiencing the same game twice.

This is an easy buy at the discounted price for fans of Minesweeper type games. For that matter, it is a worthy purchase, even if you don’t know much about the genre. The graphics are great and it has a highly stylized steampunk look. At $3.99, it is better suited for fans of these types of puzzle games, and a great title, even at full price. This game is available on the iPhone, iPad, and iPod touch. Download it in the App Store today.

Minesweeper Q is probably the most popular game of its type in the App Store. A Few Billion Square Tiles is a Minesweeper MMO.

What do you think of Grave Matters? Let us know in the comments below.