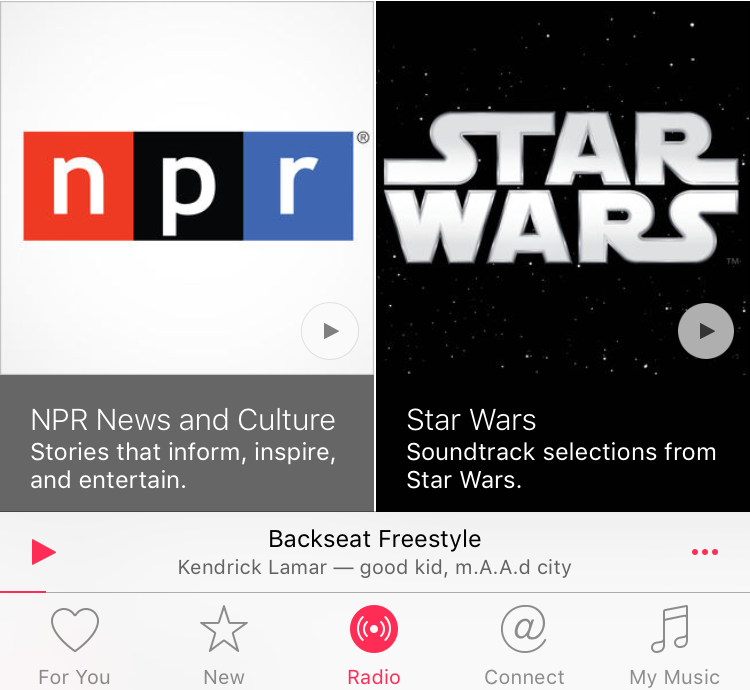 Apple on Wednesday joined the chorus of other tech companies looking to capitalize on the popularity of the new Star Wars movie, by rolling out a dedicated radio station in Apple Music. You can find the new station in the ‘Radio’ section of the Music app on iOS, or in iTunes.

As you’d expect, Star Wars radio plays through a library of memorable music from past movies. In my short time listening to the station, I heard the popular Main Title/Rebel Blockade Runner, Yoda’s Theme, Emperor Arrives, and a slew of sound effects like R2-D2 beeping.

Again you can find the station in the Music app on iOS, iTunes on your Mac or PC, and the Music app on Apple TV. It’s worth noting, though, that some folks outside of the United States are not seeing it, so it’s possible that the licensing here is on a country-by-country basis.

In addition to the radio station, Apple is also offering a $10 discount on the “Star Wars: The Digital Movie Collection” bundle, which includes all 6 previous movies in the franchise, as well as the soundtrack for Star Wars: The Force Awakens soundtrack for pre-order in iTunes.