Pedometer++ is one of the best step-counting apps in the App Store, with its developer David Smith managing to keep it alive with meaningful updates. In fact, Apple’s 2013 introduction of a dedicated motion coprocessor in iPhones that tracks movement in a power-friendly manner has helped breathe new life into Pedometer++.

Ever since the watch’s April 2015 debut I’ve been wondering how the app would fit into my fitness routine.

My primary concern at the time was whether or not a dedicated step-counting app made sense given the Apple Watch’s robust fitness and motion tracking capabilities.

But as it turns out, a bright future lies ahead of Pedometer++ and today’s feature-packed update proves my point. The new version fully embraces the Apple Watch with a comprehensive, fluid and native watchOS 2 app, complications, more accurate data sync than Apple’s Health app and more.

As mentioned, Pedometer++ has robust integration between the Apple Watch and iPhone, so you can track your step in a much more complete way. The new version has three distinct new features: data sync, complications and a Workout mode.

A more refined algorithm now counts the steps you’re taking with greater precision  than  Apple’s Health app, notorious for undercounting most users by around ten to twenty percent. It’s especially cool that you can now finally merge the steps you take with your Apple Watch with those recorded by your iPhone.

As a quick backgrounder, the Health app’s merging system loads data from a device selected as the primary source. The problem is, this doesn’t necessarily yield the most accurate of results because the best device for measuring movement is constantly switching as you go about your daily life. 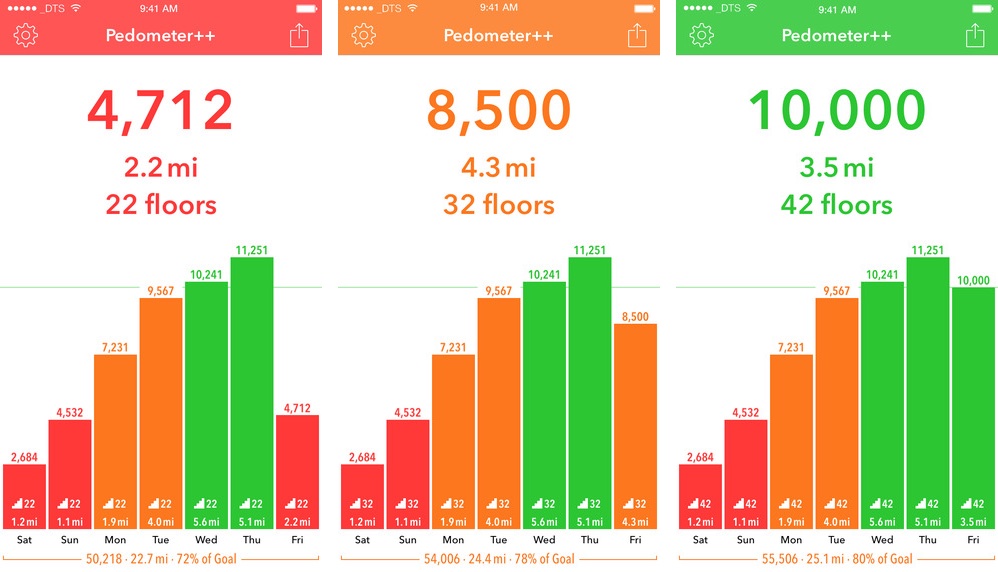 Pedometer++ solves this by going through your daily data to dynamically determine which device to use for any particular point in your day, providing a much richer and complete picture of your daily activity than you’d get from Health.

Complications on your wrist

This version of Pedometer++ also includes a variety of complications for watch faces. And when you put one on your watch face, it will be updated throughout the day, “typically every 20-30 minutes,” says Smith.

Aside from showing progress towards your daily goal, the longer form ring-based complication also displays your current step count and distance traveled. Again, having this information available every time you glance at your wrist is tremendously useful—that is, assuming you’re serious about living an active life.

This is by and large the most significant new feature. Rather than start a workout from Apple’s stock Workout app, you just tap the Pedometer++ complication on the watch face and select Start Walk.

This feature completely replaces the Workout app when it comes to counting steps. But don’t worry, workouts started in Pedometer++ are automatically registered by the Workout app (thank watchOS 2 for that as Apple’s made it possible for third-party fitness apps to sync workouts with the Workout app. 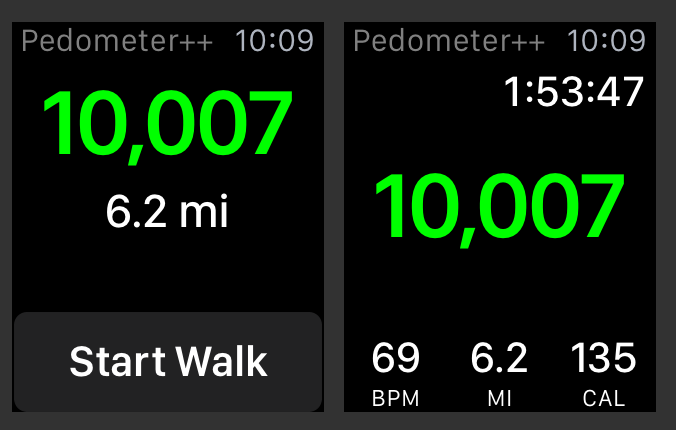 Then, there are the little touches.

For instance, data pertaining to your walks is available in Pedometer++’s workout mode without swiping back and forth: a single screen displays your current step count, time walked, active calories, distance and current heart rate.

“Once started the workout screen will persist as the default screen when you raise your wrist until you end the workout with a force touch,” writes Smith.

Get up and move with Pedometer++

With Pedometer++ for iPhone—Apple itself used it in marketing materials to show off the iPhone 5s’s M7 motion co-processor—your data can be browsed in a weekly timeline and exported as a ZIP archive attached to an email message.

Pedometer++ is one of iDownloadBlog’s Top 10 Health and Fitness Apps of 2013. I’ve been also liking Smith’s app called Sleep++ and have been using it on a regular basis to track how well I sleep at night.

Pedometer++ requires an iPhone, iPod touch or iPad with iOS 9.0 or later.

If you’re going to be using Pedometer++ on a regular basis, consider showing your respect for the developer by tipping him $0.99, $1.99 or 4.99 tip via the In-App Purchase mechanism.

Pedometer++ is available at no charge in the App Store.