Yahoo today announced it’s re-launching its venerable messaging software—Yahoo Messenger—on iOS, Android, on the web and in Yahoo Mail on the desktop.

The app offers a fresh new messaging experience rebuilt from the ground up, integrates the best of the Flickr, Tumblr and Xobni, does photo sharing and animated GIFs and is focused on group messaging with features such as sharing, unsending and liking.

Both ephemeral and permanent

“We’re excited to introduce the next generation of Yahoo Messenger. It has long been one of our core products but it was time to redesign the product from the ground up and reinvest in one of the most important products in our history as a company,” said Jeff Bonfire, senior vice president of communication products and engineering at Yahoo.

Yahoo claims the app sets the bar in speed in areas like photo sharing, near-real-time syncing of conversations between the web, Yahoo Mail and mobile app and more.

Messenger supports offline mode so you can send messages and photos even if you don’t have an Internet connection, or have low signal, and it’ll automatically send them as soon as you’re back online, without needing to resend or refresh.

As you can see below, you can “unsend” any message, photo or GIF to make it vanish from not just yours but everyone’s devices, meaning Messenger is both ephemeral and permanent. Individual and grouped messages can be “liked,” too, which can be used as a quick voting or polling system of sorts. 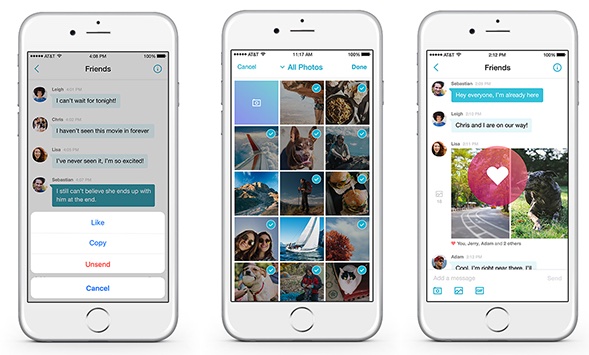 By the way, anyone in a group can add another participant, change the name of the group or even change the group photo.

Photo sharing has been tremendously improved.

“You can literally send hundreds of photos at a time and they appear to everyone in the conversation almost instantly,” writes Yahoo. Shared photos are loaded as needed to preserve storage and can be downloaded to your device in their full quality.

In addition to text chats and emoji, Yahoo Messenger now supports sending animated GIFs pulled from the Tumblr community. Just hit a GIF button in the message box to open a GIF search, which also displays a collection of the top trending GIFs on Tumblr.

The app relies on contacts powered by Yahoo-owned Xobni.

“Our smart contacts system doesn’t just understand who you know, it also understands the relationship between your contacts, so adding people to the group is really fast and simple,” explains the company.

Here are the key features of Yahoo Messenger:

The app is optimized for Apple’s VoiceOver accessibility technology. If you’re using the previous version of Messenger, you can learn more about the new changes in this support document.

Grab Yahoo Messenger at no charge in the App Store. The web app is available at messenger.yahoo.com.

Yahoo Messenger in Yahoo Mail on the desktop is rolling out globally starting today. The apps are English only but will be available in local languages soon.