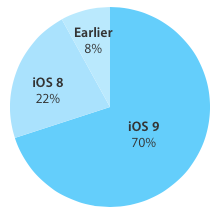 Apple’s dashboard for app developers was updated today with fresh new statistics pertaining to the rate of iOS 9 adoption. As derived from logs of iOS devices that have accessed the App Store on November 30, 2015, the various iOS 9 versions are now found on seven out of each ten devices in the wild. By comparison, just two weeks ago iOS 9 adoption stood at the 67 percent mark.

The impressive three-point gain in just two weeks stems from upgrades because iOS 7 has dropped from 24 percent of iPhone, iPod touch and iPad devices in the wild to 22 percent, while earlier editions of iOS went from nine percent to eight percent of active iOS hardware.

Just a month ago, iOS 9 adoption crossed the 66 percent mark, representing two-thirds of iOS devices in active use.

Meanwhile, according to Google’s own data, Android Marshmallow is barely a blip on the radar accounting for a meager 0.3 percent of Android smartphones and tablets. For the sake of clarity, Android 6.0 Marshmallow has been commercially available for less than two months.

In fact, the various Android Marshmallow, Lollipop and KitKat editions put together account for 63.7 percent of all Android devices, as measured by the Play Store.

Google’s own data is derived from Play Store access logs collected during a 7-day period ending on November 2, 2015. Devices running versions of Android older than 2.2 are excluded from logs.