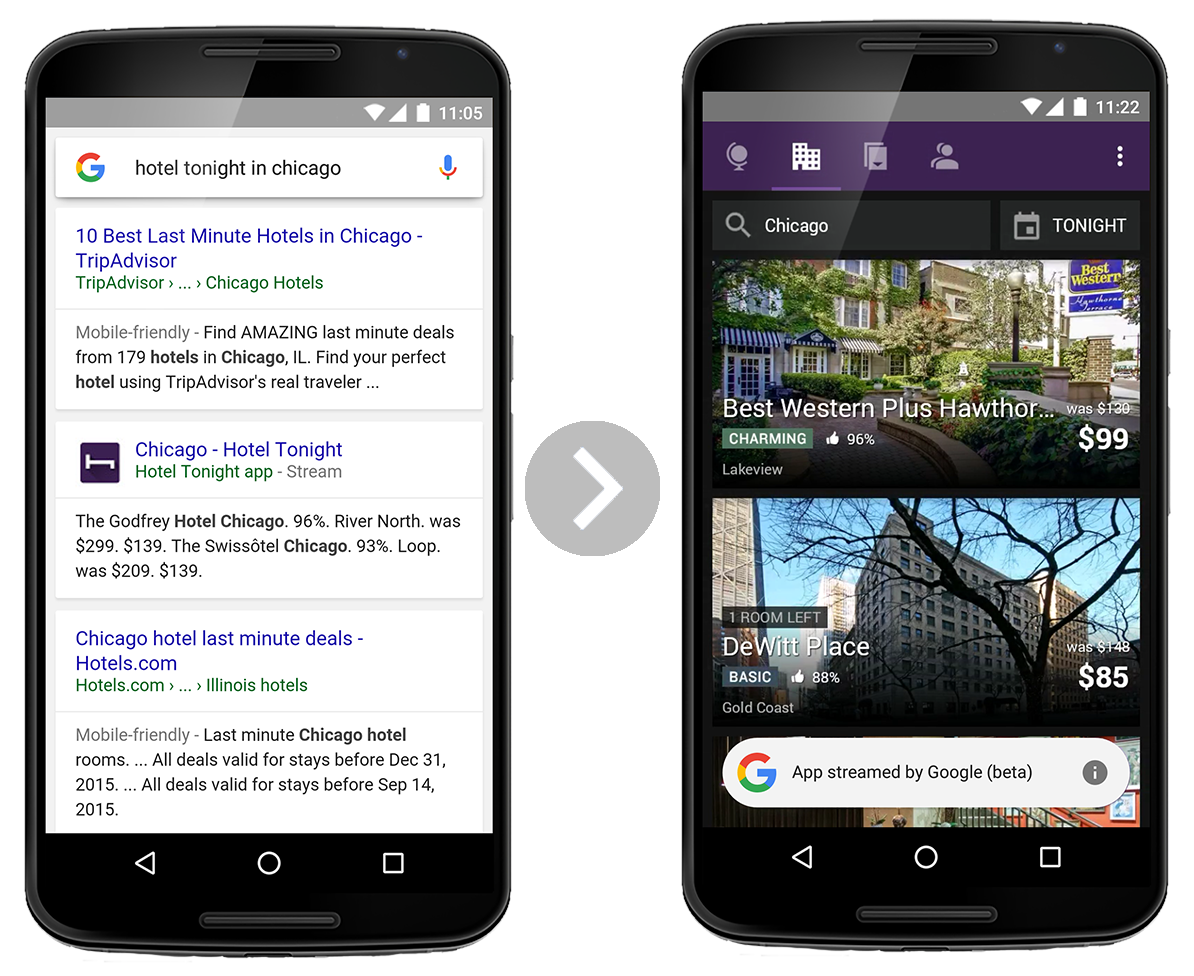 Google on Wednesday announced that its search engine has now begun to surface app content and said that it’s started experimenting with a cool new app-streaming technology to let mobile users accomplish tasks as if they were in the app itself.

“This uses a new cloud-based technology that we’re currently experimenting with,” wrote the Internet giant. App streaming will kick in when a user taps on app content in search results but doesn’t have the app installed on their device.

Before today, Google’s only been able to show data from apps with matching web content. As per Google, 40 percent of searches on Android surface app content.

“Because we recognize that there’s a lot of great content that lives only in apps, starting today, we’ll be able to show some ‘app-first’ content in Search as well,” said the firm.

Right now, this content comes from a handful of launch partners like including Hotel Tonight, Weather, Chimani, Gormey, My Horoscope, Visual Anatomy Free, Useful Knots, Daily Horoscope and New York Subway, with more to come at a later stage.

As for app-only items (content available in an app, but not on the web), developers can choose to expose it to Google Search via Google’s app indexing API.

Acknowledging that the best answers “may be buried in an app” and that finding them in apps “is still too hard,” Google is introducing an app streaming technology.

If content from an app you don’t have installed on your device appears in search results, Google will offer a Stream button “provided you’re on good Wi-Fi”.

Tapping a brand new cloud-based technology based on Google’s 2014 purchase of a startup called Agawi, this will get you a streamed version of the app so that you can find what you need as if you were in the app itself.

The only downside: you must be searching in Google’s own mobile app to take advantage of app streaming as this feature doesn’t work through a browser yet.

“And if you like what you see, installing it is just a click away,” notes the firm. I’m not sure developers will like this because users may not be incentivized to download apps if they can stream them through the web.

“The app loads in a virtual machine on Google’s cloud platform, and the client—the Google app that runs on your phone—sends up the touch interactions to the cloud machine,” Rajan Patel, the lead on Google’s app indexing team, told TechCrunch.

“And that cloud machine executes those touch interactions, renders the app and sends the pixels back down to the client,” explains Patel.

In a nutshell, these streamed apps are running on virtual machines on Google’s cloud platform. The new app streaming technology is now available on Android and will be rolling out to iOS users in due time.