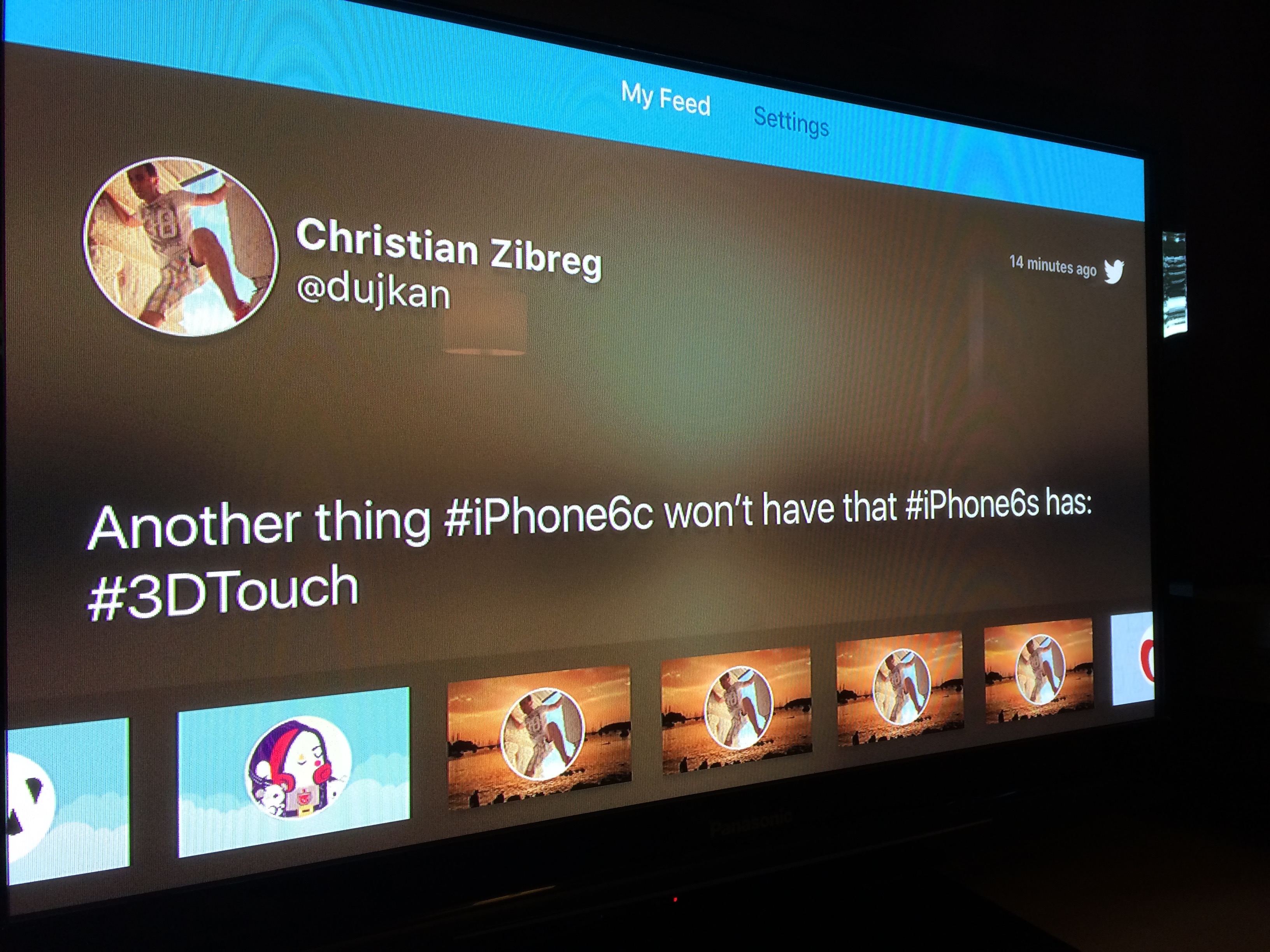 As if we didn’t already have enough ways to check in on Twitter, now we have TV to help us satiate our narcissistic tendencies. A new third-party Twitter client has popped up exclusively on the fourth-generation Apple TV so you can see what your friends are talking about.

Twitter-a-holics rejoice. There is a new way to view your feed and it looks pretty darn cool. With this app, the most recent tweets are displayed in all their glory on your 1080p (or 5K, or whatever newest display resolution you’ve got) TV screen. You don’t have to do any work, just log in and watch the tweets roll by while you relax and snicker at that cat picture.

The app takes up your entire screen with the current tweet filling up the center. The Twitter handle is at the top, while the text of the tweet appears across the screen below it. If there is a picture attached, it will load up and appear on the right side of the screen.

Upcoming and previous tweets are on deck at the bottom. The Twitter handle’s avatar (or profile picture) is displayed, so you know who’s coming up. 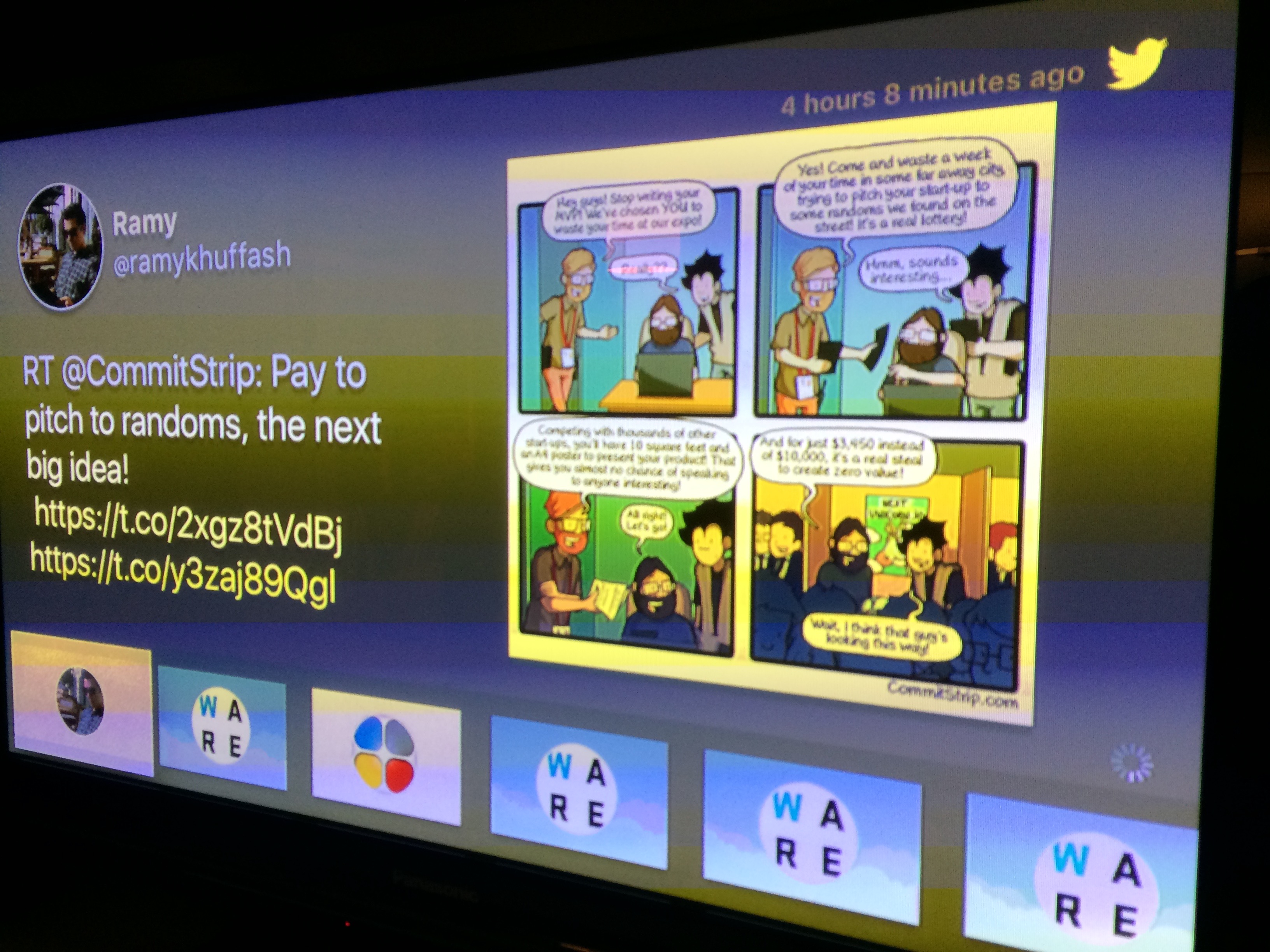 After downloading the app, you will be asked to visit an authentication website from your computer (or iOS device) to allow permission to access your Twitter account and generate a pin to enter on Apple TV.

Every 15 seconds, the next tweet will appear on screen, any pictures will automatically download and display next to the tweet. This is where the app really shines. Seeing images alongside tweets on the big screen is a nice experience.

Every few minutes, the app refreshes your feed and adds any new tweets to the end of the list.

In the settings section, you can adjust the speed of the auto scroll between five and 25 seconds. I found that 15 seconds is a good speed. It gives you enough time to read a tweet and look at a picture without feeling like you have to get through it fast.

You can also increase or decrease the number of tweets the app will scroll through from 10 to 30. The only problem with lowering the maximum feed number is that it starts to get repetitive, viewing the same 10 tweets over and over again while you wait for a refresh.

You can turn off the automatic image display, but I can’t imagine why anyone would want to do so. Unless, maybe you follow people that like to post NSFW type images and you want to share your Twitter feed with your family.

However, the app’s developer, Aaron Stephenson, is already working on updates and has version 1.2 already in review in the App Store. Stephenson told us what is coming in version 1.2, which includes the ability to filter tweets.

“Added a Filter view which allows you to filter out Tweets now rather then just show your Twitter feed. You can filter Tweets to show a specific Hashtag, a Twitter account, just your Tweets, just Tweets you’ve favourited or just your mentions. I hope that this feature allows people to moderate what is shown. I particularly like the Hashtag feature so say your at a conference and the conference has a Hashtag then you just filter per that Hashtag and Tweets with it will be shown. Perfect for meet ups, conferences or even as a social media screen for a business.” 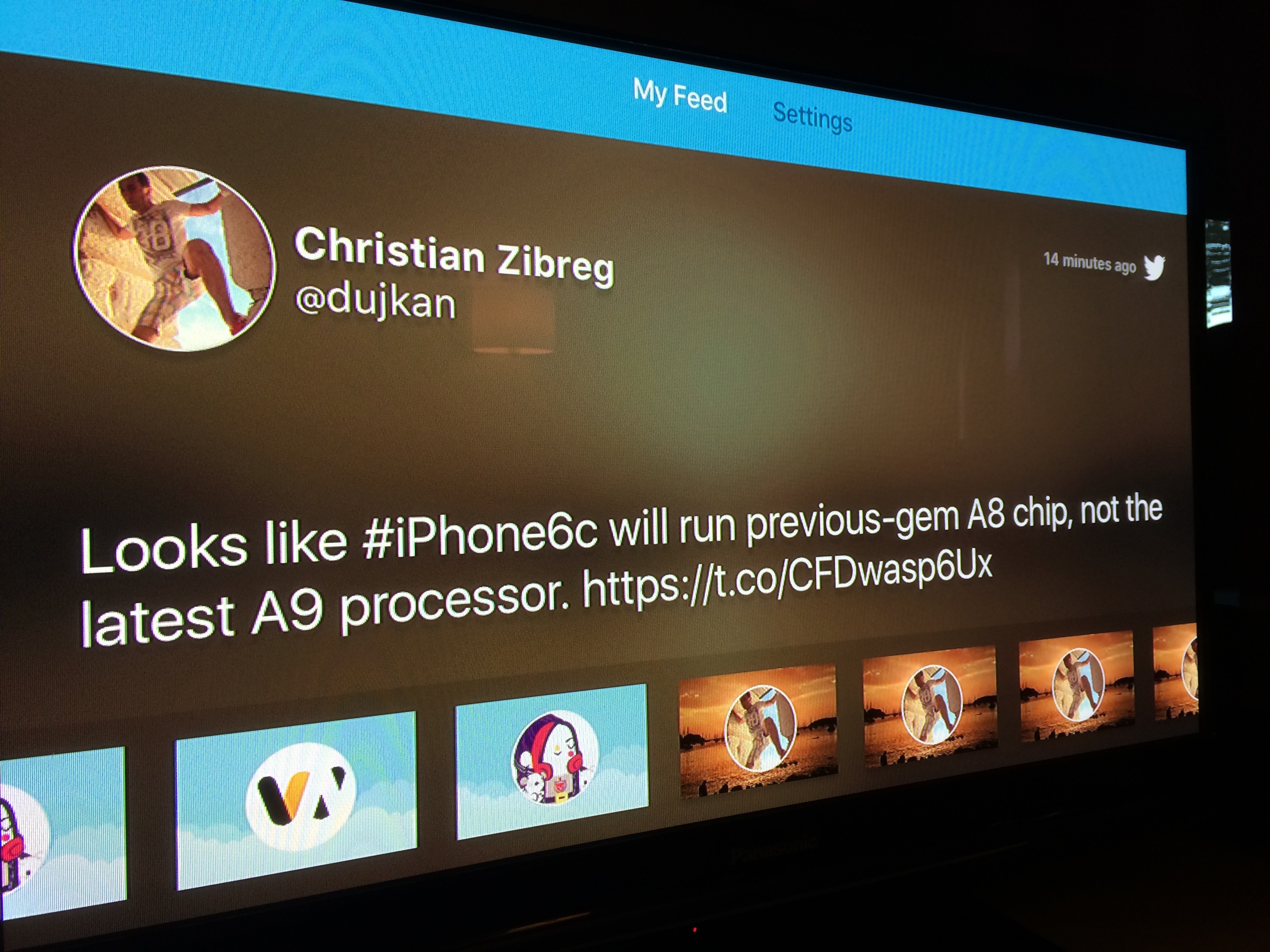 You get to see your Twitter feed on your TV screen. What isn’t good about that?

The app’s UI is designed well and I like being able to see upcoming tweets at the bottom of the screen.

As noted above, this app is very limited in its features right now.

Airfeed for Twitter costs $2.99. In its current state, the price is a little high. However, Stephenson is already working on adding useful features that enhance the experience. Hopefully, he will continue to bring even more in the future.

I would recommend this app to avid Twitter users. It has enormous potential to become a great third-party client for Twitter on Apple TV and you would be an early adopter to something that could be revolutionary. Purchasing the app now would show the developer that you are interested and you could help bring more features in the future.

What do you think of Airfeed for Twitter? Let us know in the comments.