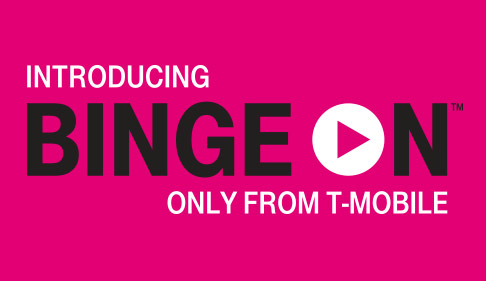 T-Mobile just took the cover off of its latest Uncarrier initiative, Binge On, which will allow customers who pay for at least 3GB of data to stream Netflix, ESPN, Hulu, HBO Now, Sling, and other popular video streaming services without it counting against monthly data usage.

If that sounds a bit crazy, then we’re right there with you. T-Mobile has done similar things with music streaming already, but video is a whole different animal altogether.

But unsurprisingly, there is one small catch. T-Mobile will essentially cap the maximum quality of the video streams participating in its plan through what it calls “optimization”. Basically, it’s reducing the amount of bandwidth used for videos, which will result in at least some quality degradation for most modern smartphones.

The promotion, entitled Binge On, optimizes video for mobile screens, minimizing data consumption while still delivering DVD or better quality (e.g. 480p or better). That means that you should expect some degradation, and watching video on an iPhone 6s Plus, which offers a 1080p screen, may feature a noticeable dip in quality.

T-Mobile says that its data optimization, which streaming services must opt into, results in an approximate 30% decrease in bandwidth usage. Users will have the option of opting out of Binge On if they find that the quality of the video doesn’t meet their standards, but T-Mobile says that users should expect at least DVD quality for streams.

Along with the revelation that T-Mobile is offering video streaming without charge for 24 popular video streaming services, the carrier is also doubling data for both new an existing customers of its Simple Choice plans.

T-Mobile is seriously trying to shake things up, and it has reaped results. T-Mobile is currently the fastest growing carrier, even though it remains in third place behind Verizon and AT&T.

As most of you guys know by now, I’m a huge T-Mobile proponent. I’ve been a T-Mobile user for several years now, and I’m usually not shocked by their promotions, or the antics of enigmatic CEO John Legere. But even I had to do a double take when this scrolled across my Twitter timeline. Of course, my excitement was quelled a bit when I got to understand the data optimization element involved, but hopefully it won’t be too noticeable.

Here are the services that will work with T-Mobile new promotion:

That’s a healthy looking list, but it does feature one glaring omission: YouTube. It means that you will still be docked for data usage when watching one of our videos here at iDB.

Would you consider switching to T-Mobile now that you can stream all of the Netflix, Hulu, and HBO shows that you want without incurring data cap limits?