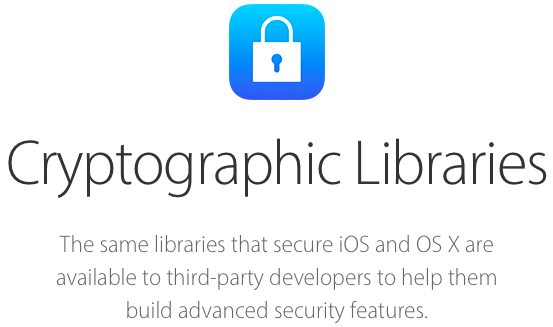 Apple yesterday announced it’s opened up its cryptographic libraries, the same ones used to protect iOS and OS X, to third-party developers. As reported by VentureBeat, the move is significant in that developers can now implement advanced security features into their apps, for free.

In addition to open-sourcing the cryptographic libraries, Apple back in the summer promised to open source its Swift programming language by the end of the year.

The frameworks also support the storage of certificates and cryptographic keys in the keychain, which is a secure repository for sensitive user data. The code relies on the core crypto library, which Apple submitted for validation of compliance with the U.S. Federal Information Processing Standards (FIPS) 140-2 Level 1.

“Although Core Crypto does not directly provide programming interfaces for developers and should not be used by iOS or OS X apps, the source code is available to allow for verification of its security characteristics and correct functioning,” explains Apple.