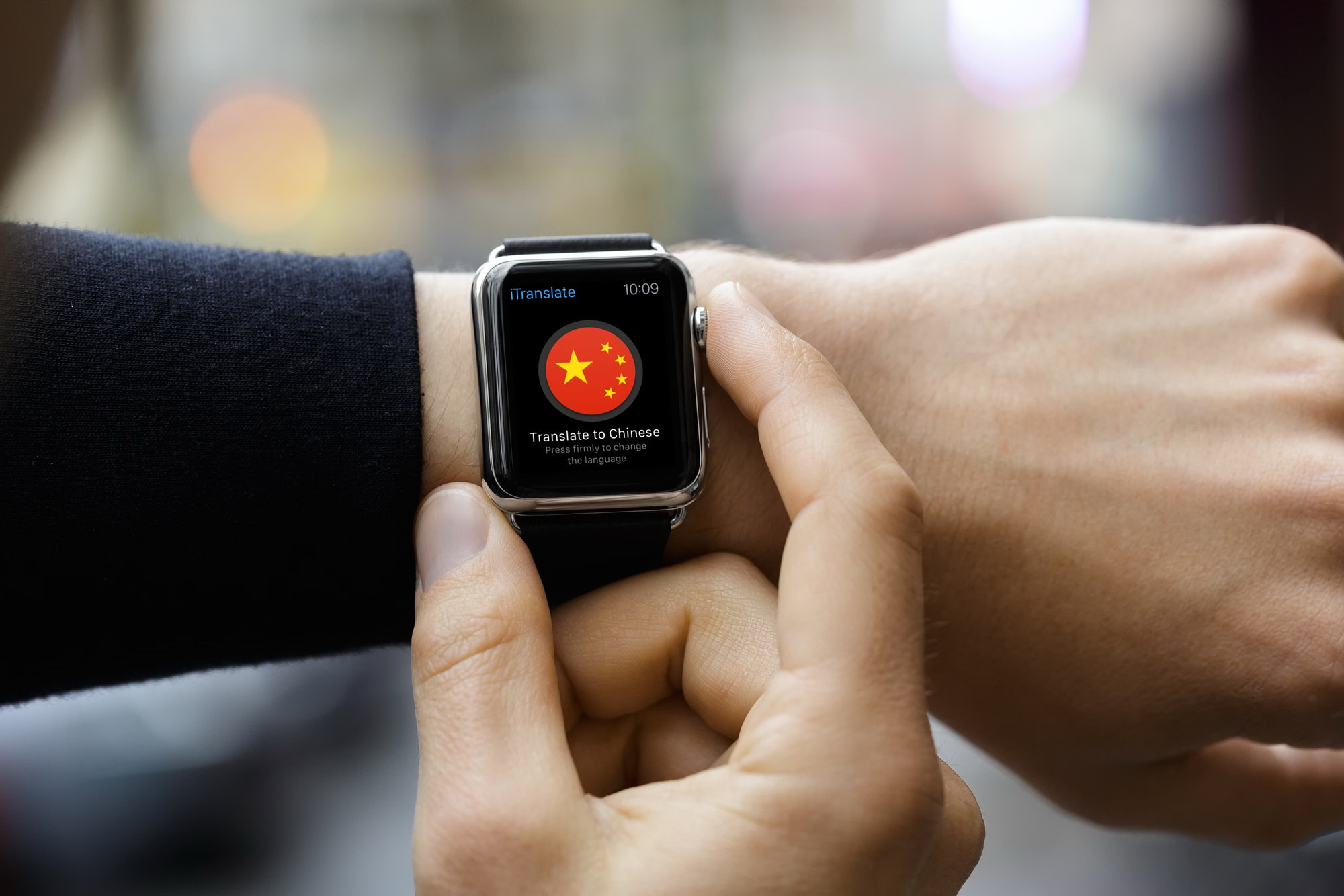 Now that the watchOS 2 software update has released to the general public, a healthy debate is developing amongst my techie friends about the benefits that native apps are supposed to enable.

The long story short, native apps run directly on the device and talk to its underlying hardware and sensors so most tasks should feel faster and smoother than before.

For instance, apps can now play sounds through the Apple Watch’s speakerphone and take voice input from its built-in mic. To test how this works in the real world, I’ve spent a few hours with iTranslate by Sonico Mobile GmbH, arguably the best translator app you can put on your wrist to overcome language barriers, Star Trek-style.

Universal translator on your wrist

Launching iTranslate takes a surprisingly long time to load, between five and ten seconds which I don’t think is acceptable for a native app.

But once it’s loaded, the app is very responsive and speedy now, even more so compared to its cumbersome and sluggish watchOS 1 counterpart. More important than that, iTranslate takes full advantage of the fact that native apps can now play and record audio directly on your Apple Watch.

As a result, iTranslate’s built-in voice recognition technology can now instantly translate words, phrases and text and play back translations through the Apple Watch speaker, no need to pull out your iPhone whatsoever.

The app uses system dictation to recognize your spoken input. It then talks to the cloud which translates your query into a target language that the app plays back for you.

To change your target language for translations, press the display firmly and choose Change Language. Up pops a list of more than 90 languages that you can translate to and from. If there was such a thing as a universal Star Trek translator, this would be it.

WatchOS 2 also supports third-party Complications. In watch making terms, Complications are added features to the movement of a watch beyond telling the hour and minutes.

In addition to acting as a shortcut to its Apple Watch app, the iTranslate Complication automatically sets the language for you based on your current location.

By the time your flight lands in Paris, the Complication will know that the local language is French and set it accordingly. All you need to do is glance at your Apple Watch and tap a button to start a translation.

Another great thing about the Complication: it automatically displays common phrases like “good morning” and “good evening” using Time Travel.

Speaking of which, Time Travel is another great feature of watchOS 2.

Available from your watch face, you simply turn the Digital Crown to go forward and backward through time and Complications update their output accordingly. This lets you see what’s happening and what’s already happened. 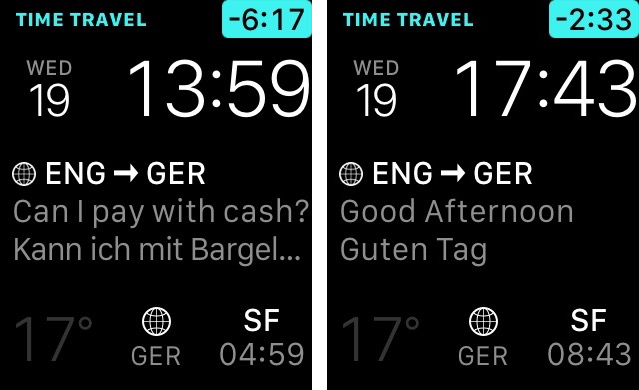 For instance, Time Travel lets you see what the weather will be like for your lunch date in a few hours. Or, you could go back in time to catch up on news headlines you may have missed.

iTranslate’s update on the iOS 9 side includes support Slide Over and Split View multitasking features that really improve the experience and workflow for users. 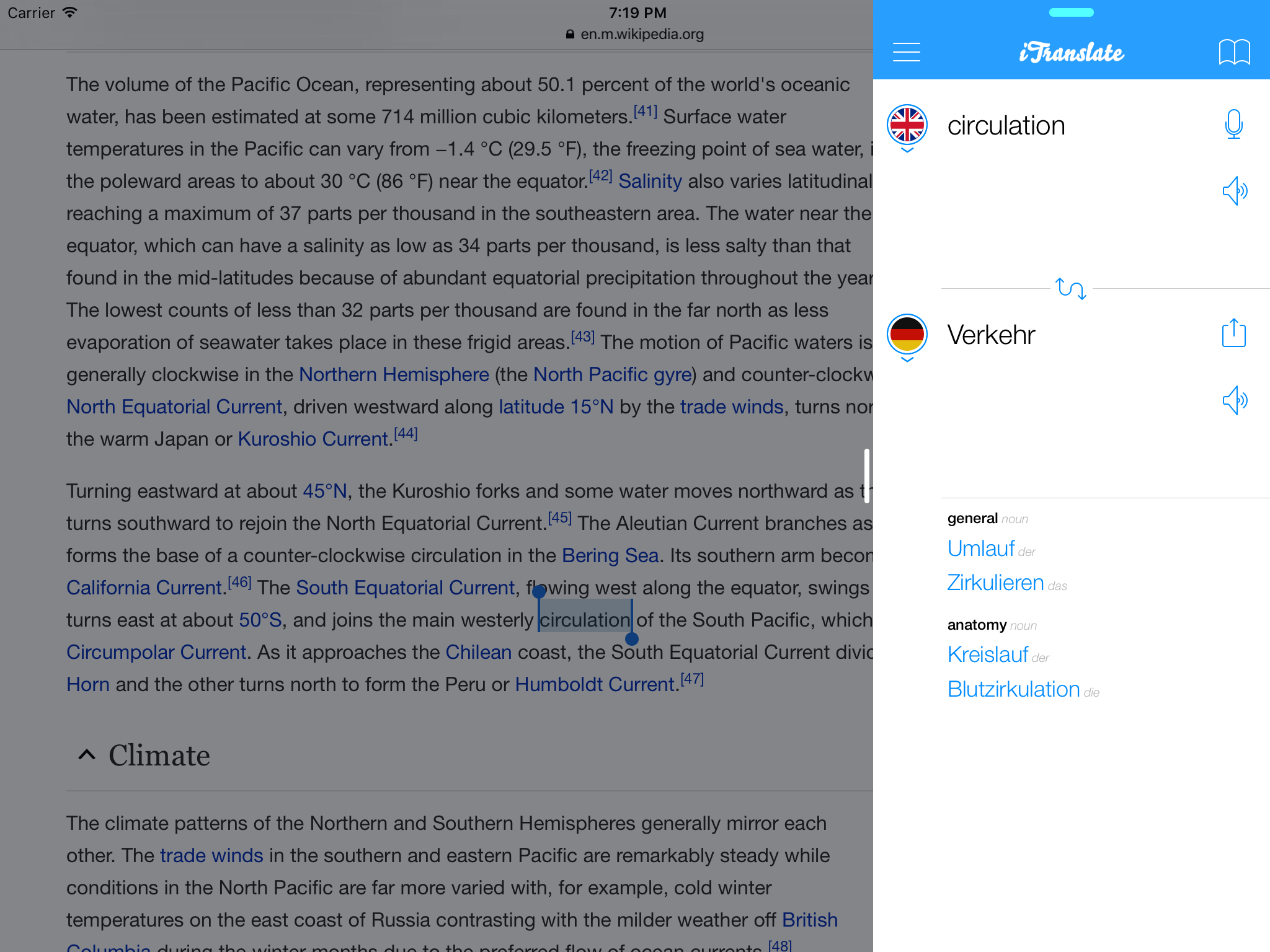 The app can also run side-by-side with another app in iOS 9’s Split Screen view. Keep in mind that Split Screen multitasking is only available on the iPad Air 2, iPad mini 4 and iPad Pro.

For instance, you can run apps like Mail/Safari and iTranslate side-by-side and quickly look up a word or translate a sentence while you’re reading your email or browsing the web. This is perfect for research or when working on a document in another language. 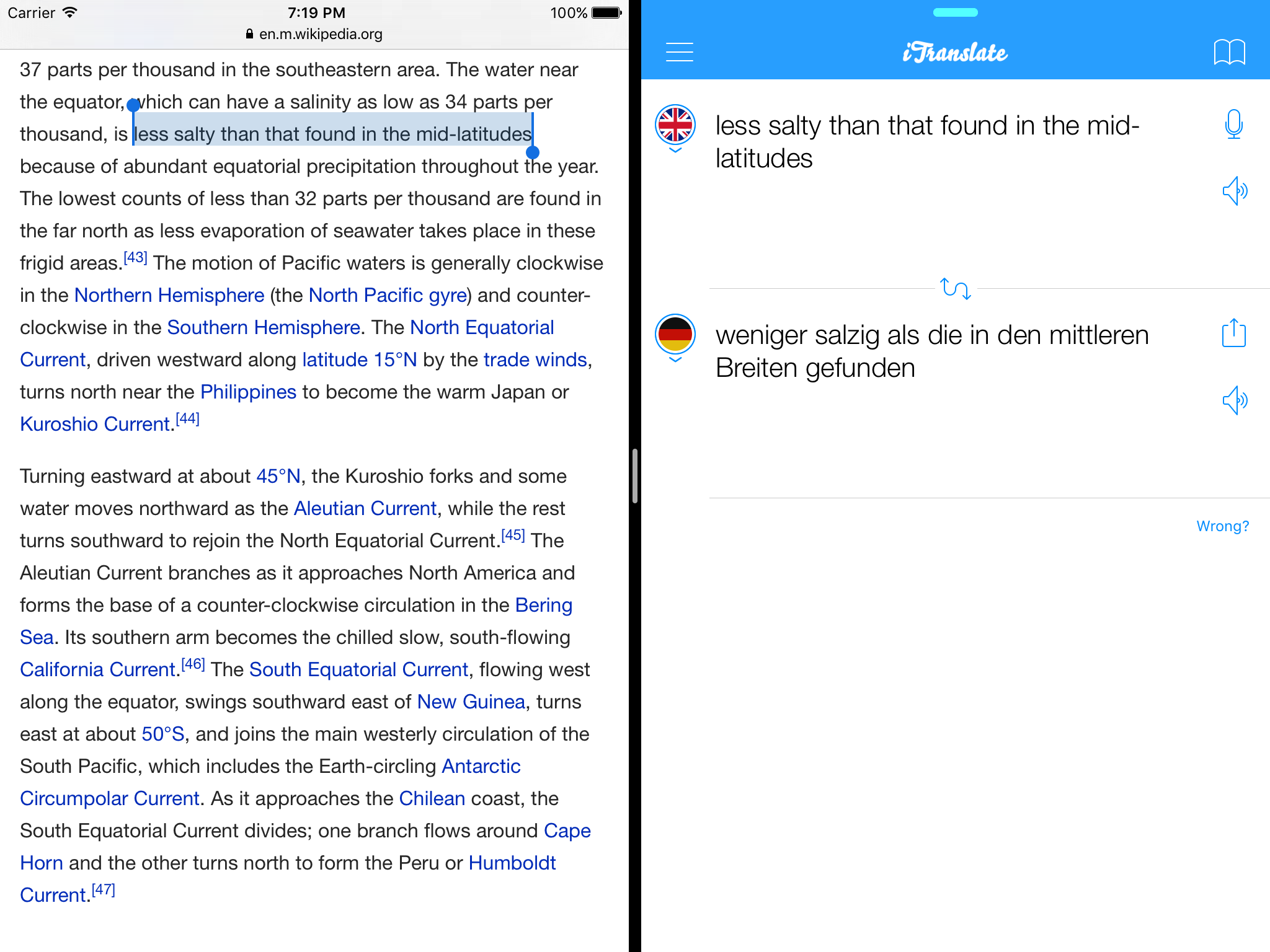 Support for Spotlight Search is another great productivity boost in the latest version of iTranslate. iOS 9 allows apps to optionally expose their content to the operating system for search within the Spotlight interface. 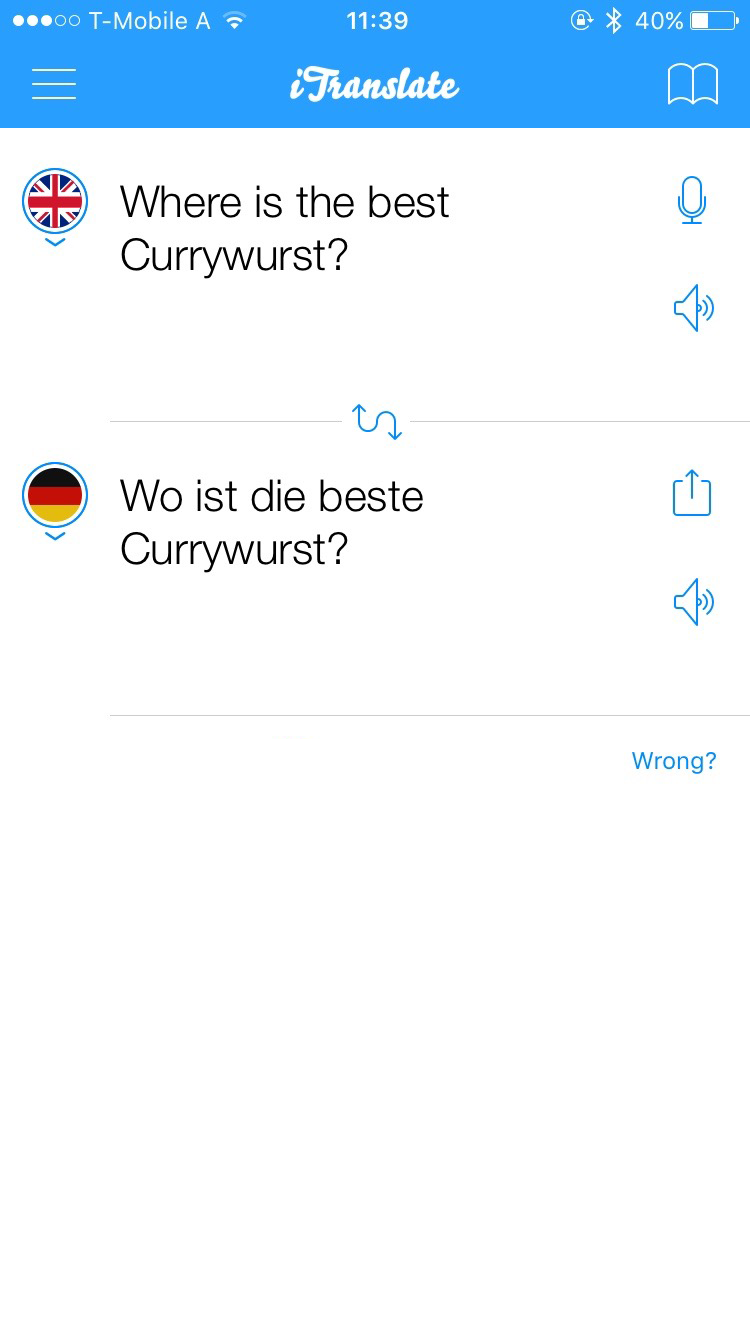 To take advantage of this feature, please ensure that iTranslate is not excluded from Spotlight Search in Settings.

Full tutorial: How to prevent Spotlight from searching certain apps on iOS 9

“Our vision for iTranslate is to always solve your translation problem as fast as possible, so we actually don’t want to keep you in our App, but get you out as quickly as possible,” says Alexander Marktl, CEO of iTranslate. 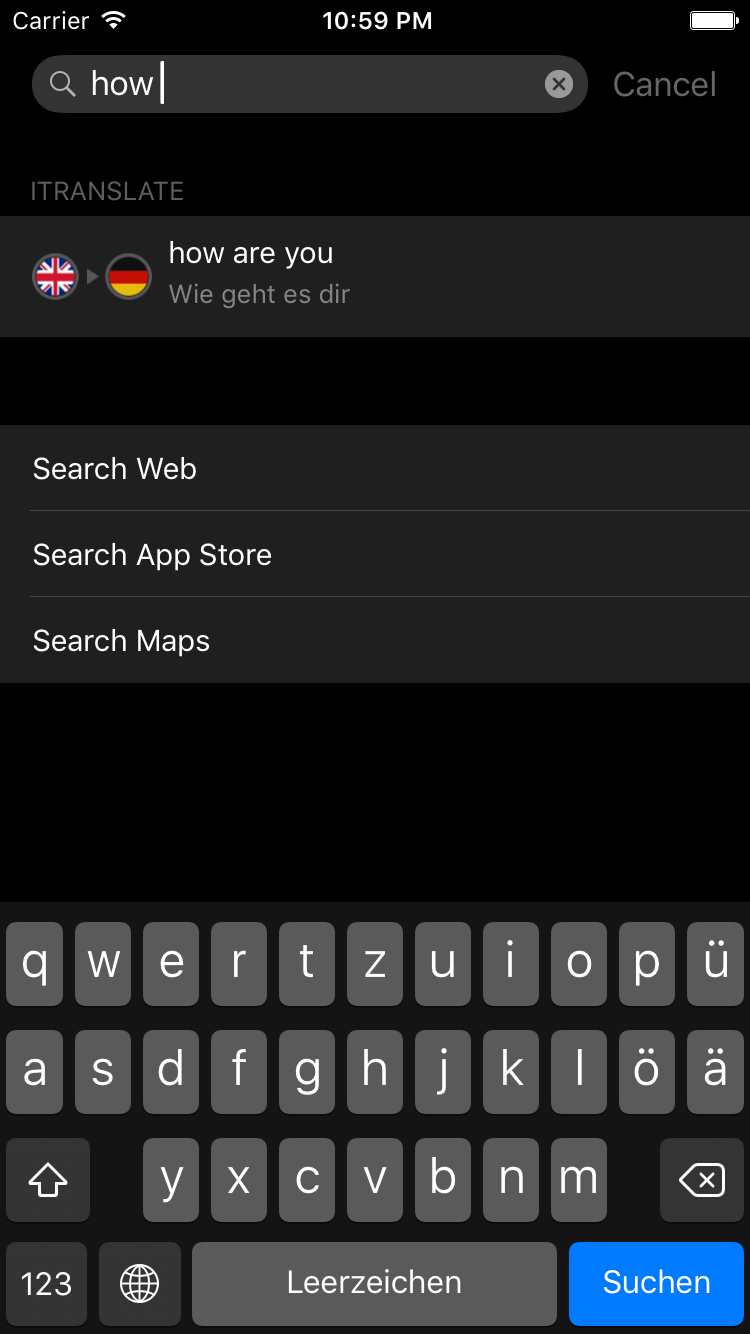 And if you add iTranslate as a Today widget to the Notification Center, you will be able to translate text copied from any app without even opening iTranslate. Topping it all off is a nice keyboard extension for accessing the capabilities of iTranslate in all your fav apps.

Other iTranslate tidbits include  translation history, saving a translation for later offline access, romanization, a bunch of different dialects for male and female voices, speech rate controls and much more.

A one-time $4.99 In-App Purchase upgrades you to iTranslate Premium, which removes advertisements and unlocks the voice recognition feature that lets you speak instead of type on iPhone and iPad, no training needed.

“Just start speaking and we recognize your voice, transform it into text and translate it into another language,” developers write.

With all of the aforementioned features for both iOS 9 and watchOS 2, little wonder that Jeff Williams, Apple’s senior vice president of Operations, called iTranslate “One of my personal favorites” at the September 2015 ‘Hey Siri’ keynote presentation.

To me, iTranslate is the closest thing yet to the killer Apple Watch app.

To be perfectly honest, the app isn’t without its pitfalls. My main quibble is longer-than-expected loading times that I sincerely hope will be fixed with an update. That being said, I can’t shake off the feeling that native applications like iTranslate are held back by the underperforming Apple Watch hardware.

Sadly, that’s not something fixable with a simple firmware update.

The iTranslate 9.0 update is available free to existing users. The 43.3-megabyte download requires an iPhone, iPod touch or iPad with iOS 9.0 or later.

As mentioned, iTranslate supports more than 90 languages for instant translations. Split View requires an iPad Air 2 or iPad Pro running iOS 9 or later while Slide Over works with any iPad model supported by iOS 9.

iTranslate is free to download in the App Store.