Your Apple Watch pings you when it’s time to stand up and move a little and so should your Mac, except that it doesn’t. Maybe you don’t own an Apple Watch? Lead a sedentary lifestyle much? Hopelessly out of shape? You should make standing up a habit as standing for just three hours every day, five days a week, has the same health benefits as running ten marathons a year.

You could create a reminder to ping you every hour to stand up, but that’s not an elegant solution as these alerts reach all your devices, not just your Mac.

A far better solution that I want to talk about today would be something like Stand. Stand is a simple Mac app built by developers Red Davis Hector Simpson which sends you a notification every hour to get up from your desk and move around a little.

Make standing up a habit

Even if you own an Apple Watch, Stand is still a must-have app because wrist notifications can still get missed, put off by ten minutes until it’s too late or simply ignored.

Not sure about you, but habit-forming gadgets like the Apple Watch have made me lead a more active life. Since getting my watch, standing up after receiving a subtle ping on my wrist has become second nature.

But as someone who’s tied to his desk on a daily basis, I tend to mute those alerts when I’m in the middle of important work.

That’s where Stand for Mac comes into play. 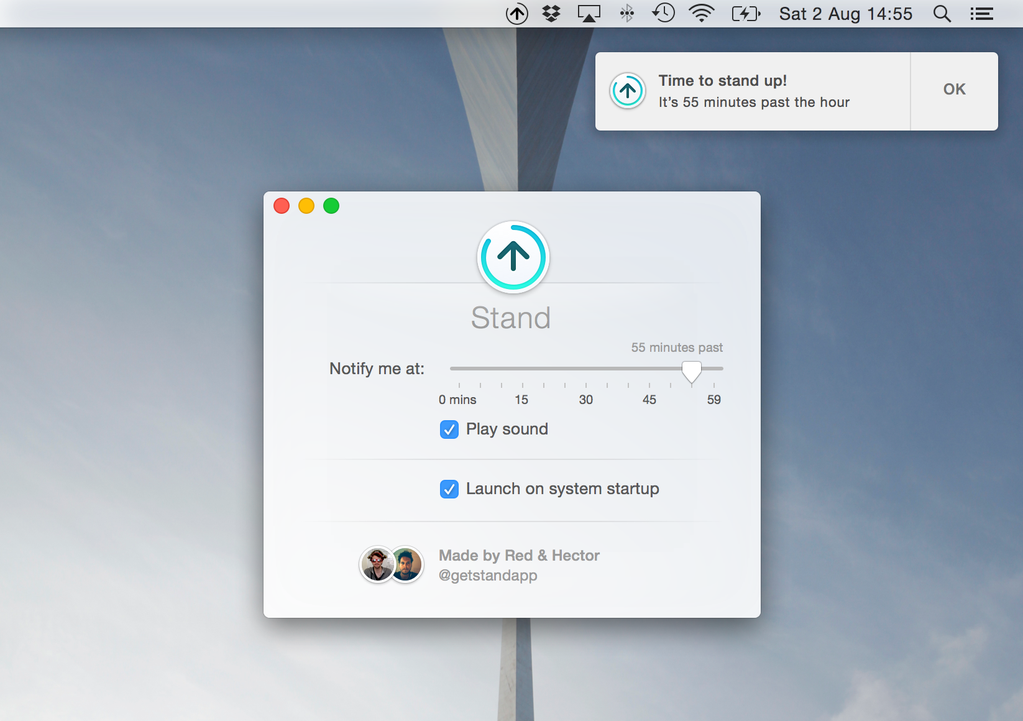 As mentioned, this nifty little utility reminds you to stand once every hour by sending you a notification at the time you choose.

The elegantly designed software sports the user interface that couldn’t be simpler. You just choose when in the hour you want the alert and the app will take care of the rest.

Right on cue, a little notification pops up, saying “Time to stand up!”

That extra nudge is all you need

And that single reminder will make your day a little healthier unless you blatantly ignore it. Needless to say, apps like Stand give you that extra nudge but won’t do the actual work for you.

You and only you, my friend, posses the willpower to actually lift your butt up when it’s time to get physically active a little.

The only downside to using Stand is the fact that it cannot actually track your standing as your Mac lacks a gyroscope, accelerometer and other sensors to determine if you’re actually standing or cheating.

On a final note, don’t let Stand’s simplicity fool you—sometimes the simplest, the most obvious solutions are the best.

If you dig Stand, you should check out Time Out Free, a free of charge Mac app which pings you to take a break from long hours of working.

Lastly, Business Insider has put a great list of the 15 best apps for keeping your life in order and help you remember everything from your keys, to your bills to where you first met someone and much more.

I’ll just admit it: I ignore notifications on my Apple Watch when I’m too busy working on my Mac. But since using Stand, the app’s reinforced my awareness of standing alerts.

Having an app like Stand running on my Mac and dutifully issuing hourly reminders to get up and move around makes a big difference when I’m sitting at my desk and blogging away like there’s no tomorrow.

Besides, Stand is hell of a lot cheaper than purchasing a standing desk.

Note that this app isn’t sold through the Mac App Store. Instead, Stand is a pay-what-you-want app so head over to the official website to download Stand and give it a whirl.

Due to processing fees, the minimum monetary value required is $1.