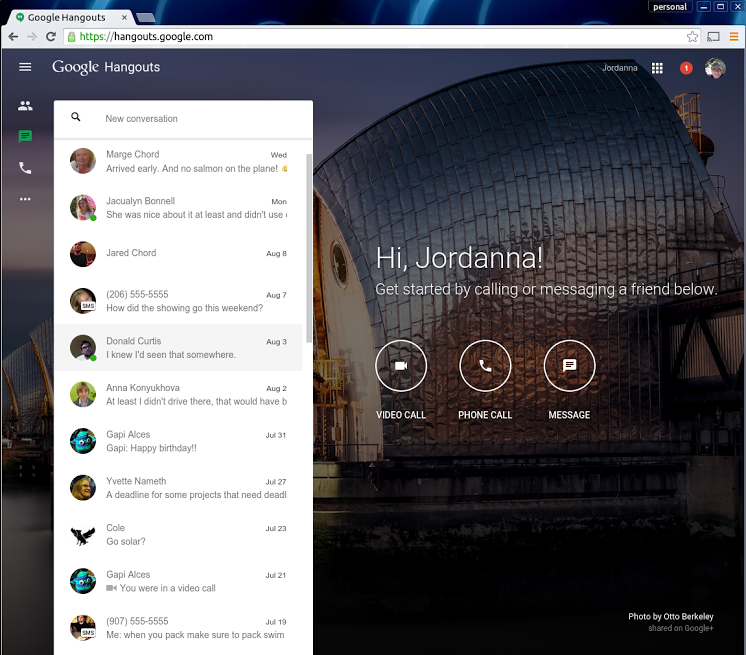 Try it out at hangouts.google.com and let us know what you think in the comments.

“We are launching another way to use Hangouts today,” Jordanna Chord, a software engineer at Google, wrote in a post over at Google+.

“From our new site you’ll be able to take advantage of the best of Hangouts in the browser, along with an inspiring image to get you through the day.”

Not only does the web app supports messaging, but voice and video calling with up to 10 people. Messaging features on the web include one-on-one or group conversations with up to a hundred people, as well as rich media in messages including photos, maps, emoji, stickers, GIFs and more.

Needless to say, your chats sync seamlessly from device to device so you can keep the conversation going no matter if you’re on iOS, Android or the web.

While you were always able to run Hangouts as a Chrome browser extension, the new website is supported by most modern web browsers. Originally conceived as a integral part of Google+, Hangouts has recently broken out of Gmail.

Though still available as part of Google+, the recently announced decoupling of Google’s failed social thing from the rest of its services suggests that Hangouts is now moving in its own direction.

As mentioned before, the Hangouts web app is available at hangouts.google.com. Note that you’ll see an error page if you visit the web interface from a mobile device.

You don’t need to install any special software to chat away on the web. Voice calling requires the Google Talk plug-in and video calls require the Hangouts plug-in, now known as the Google Audio and Video plug-in.

Sadly, Opera users are left in the dark as Hangouts doesn’t appear to work with that browser. Google also provides Hangouts for iPhone and iPad, a free download in the App Store.

Speaking of which, the fate of the iOS app is somewhat unclear at this point. It’s been months since it’s received any major enhancements aside from a June update which brought out tidbits like smart location sharing, statuses, deeper Voice integration and other perks.

Do you use Hangouts?

And if so, what do you think about the new web app?