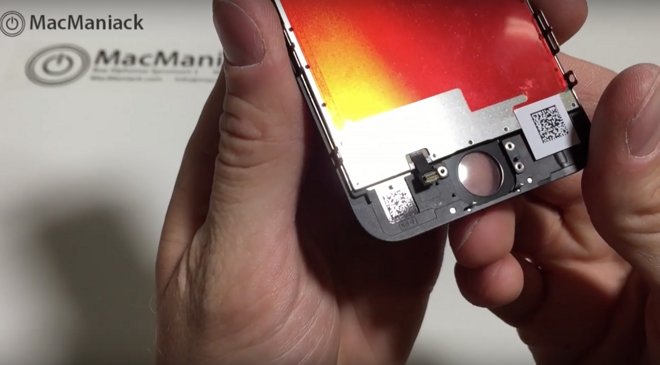 With just a few weeks until Apple’s rumored September 9 media event, small wonder we’re now seeing a bunch of parts for the upcoming ‘iPhone 6s’ and ‘iPhone 6s Plus’ smartphones leaking out from Asian supply chain.

European repair firm MacManiack was able to get hold of a fully assembled display component for the iPhone 6s from a supplier and today posted a video of it. This could also be a ploy to steal free publicity on the part of MacManiack so take the report with healthy skepticism.

Holes for the front-facing FaceTime camera and the proximity sensor appear to be unchanged from the present-generation iPhone 6. But as AppleInsider noted, the ribbon connectors have been slightly altered and the shielding on the back of the LCD is now glued into place.

The video runs one minute and 44 seconds long, here it is.

“Apple has apparently chosen to integrate the home button — and accompanying Touch ID sensor — with the LCD and digitizer connectors, possibly in a bid to save space or make assembly simpler,” writes the publication.

“The firm believes that a new connector on the display assembly’s rear points to Force Touch, but this is conjecture and other rumors have painted different pictures of that connector’s purpose.”

In addition to this video, another leak this morning brought us claimed technical drawing and an accompanying video purportedly showing a fourth-generation iPad mini housing. The leak provides additional clues that the forthcoming device will file as Apple’s slimmest iPad mini yet.

Apple is expected to unveil new iPhones and iPads alongside a next-generation Apple TV with downloadable apps, Siri and a touch-enabled remote at a rumored media event taking place on September 9.