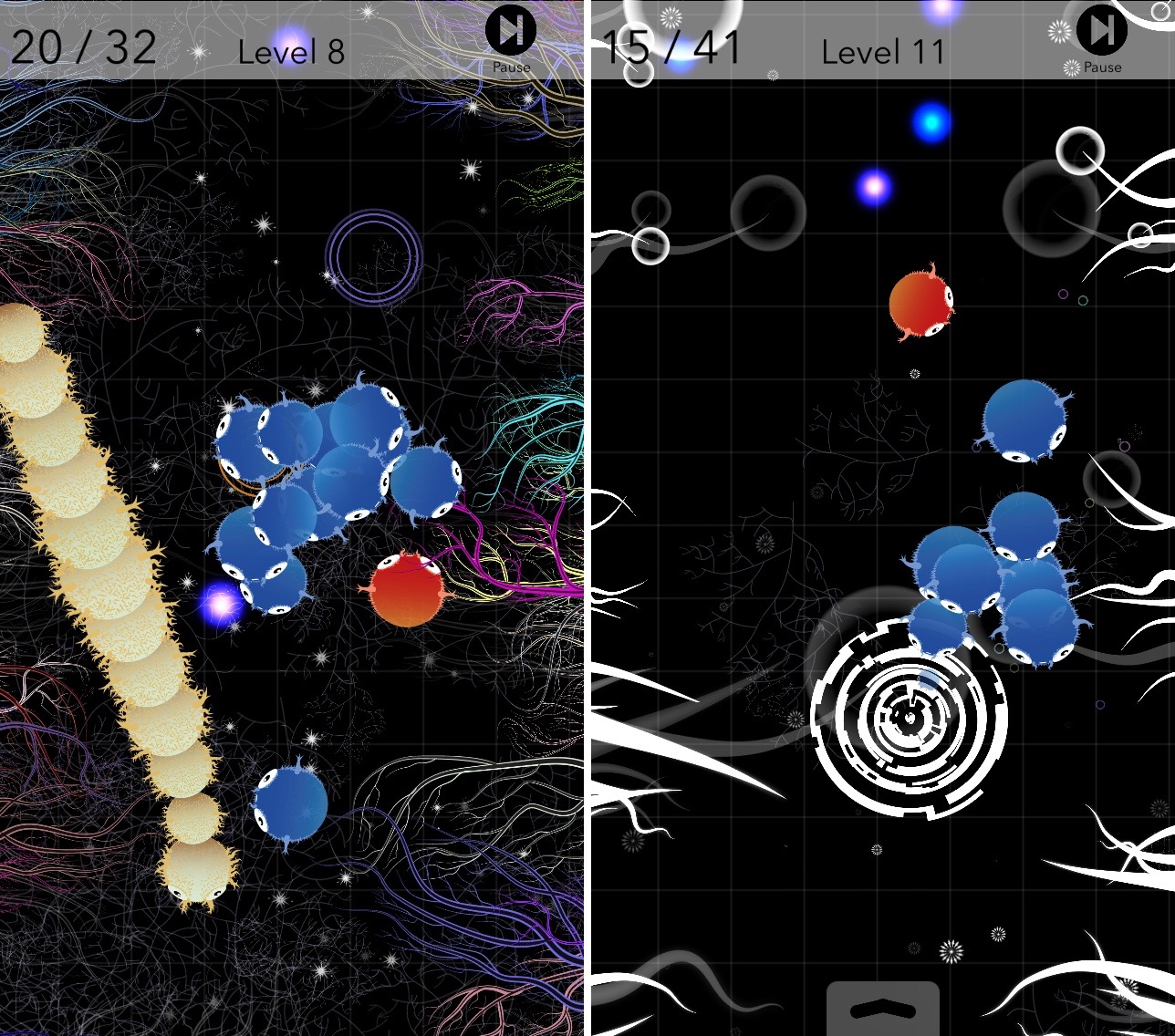 As far as simple mobile games go, there are an uncountable number of them, so many that it is difficult to search through them to find the interesting ones.

That’s where I come in. One game that was recently introduced to me is called Lead Them. While at first glance, it may seem like a vertical scroll game with a pretty skin, it turns out that it has a few tricks that make it stand out. We’ve got a full game review of Lead Them for your reading enjoyment today.

Players must help a group of microorganisms move through their dangerous environment, collecting food to survive. There are obstacles that get in the way, some of them lethal, and other mechanics that making the search for nutrition more difficult with each new level

This title has a relaxing atmosphere reminiscent of games like Osmos in style (but not mechanics). The world is abstract with a dark background and white or colored foreground. The microorganisms are blue, but you can purchase new colors in the game for $0.99 each. The music is moody and calming while the digital themed sound effects add an otherworldly element to the game. 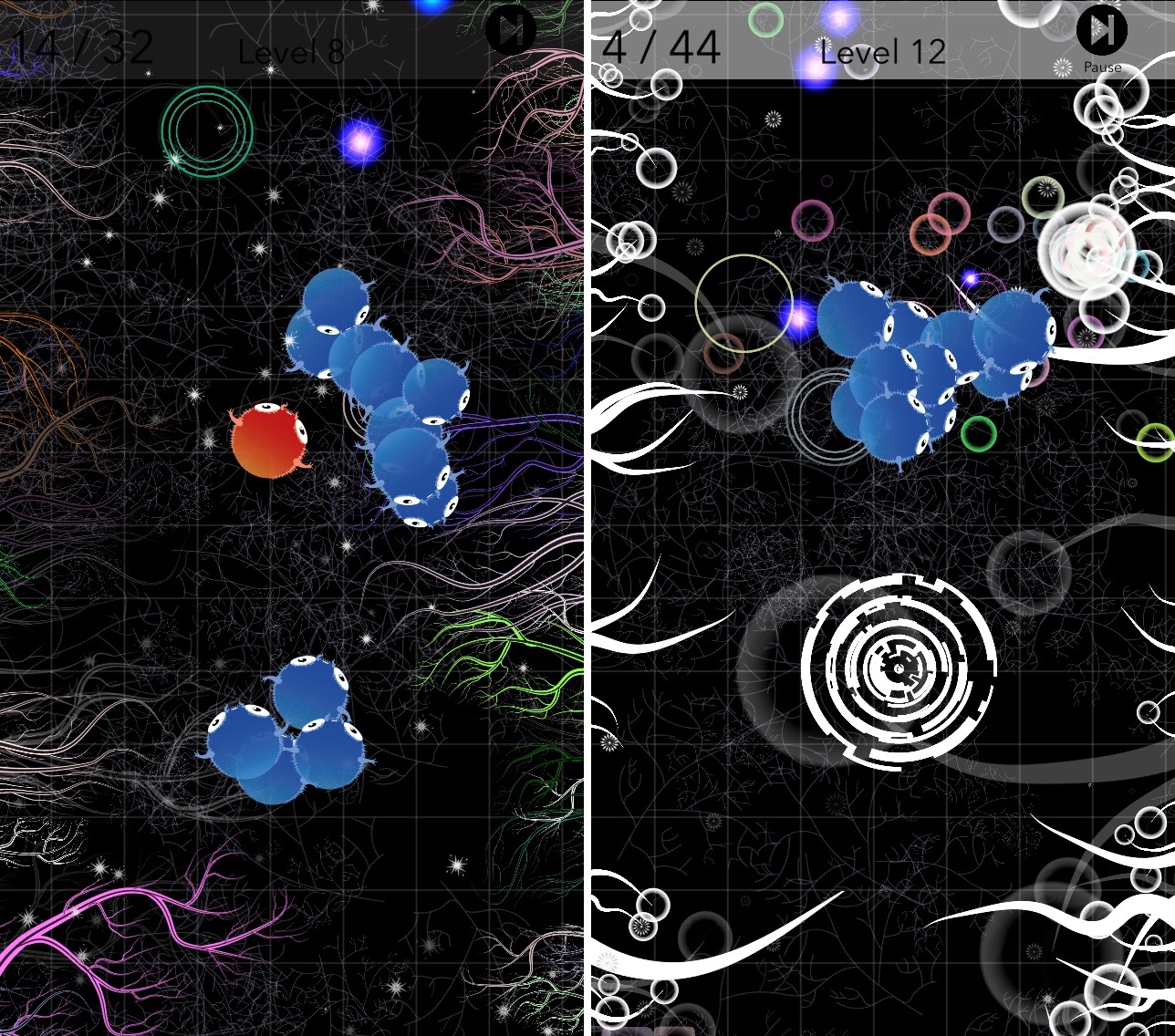 The goal of each level is to guide a group of microorganisms through a vertical pathway, collecting glowing food particles. To guide the group, touch the screen and drag your finger to the area you wish them to go.

In addition to gathering food, you must help the group avoid the dangers in this unknown abyss. Different elements are introduced into the game, making new levels more difficult to complete. There are black holes that suck the creatures into nothingness, buzz saws that destroy their existence, and caterpillar like creatures that eat them.

There is also a pesky opposing microorganism whose sole purpose in life appears to be to make yours harder. It follows the group and blocks it from moving around. Some will get through, while others are trapped by this persistent distraction. If you don’t free them from the pest, they may end up sucked into a black hole.

As long as you have at least one member of your group, you can keep playing a level. So, if you start out with 10 microorganisms, but half of them get eaten, you are still in the clear. 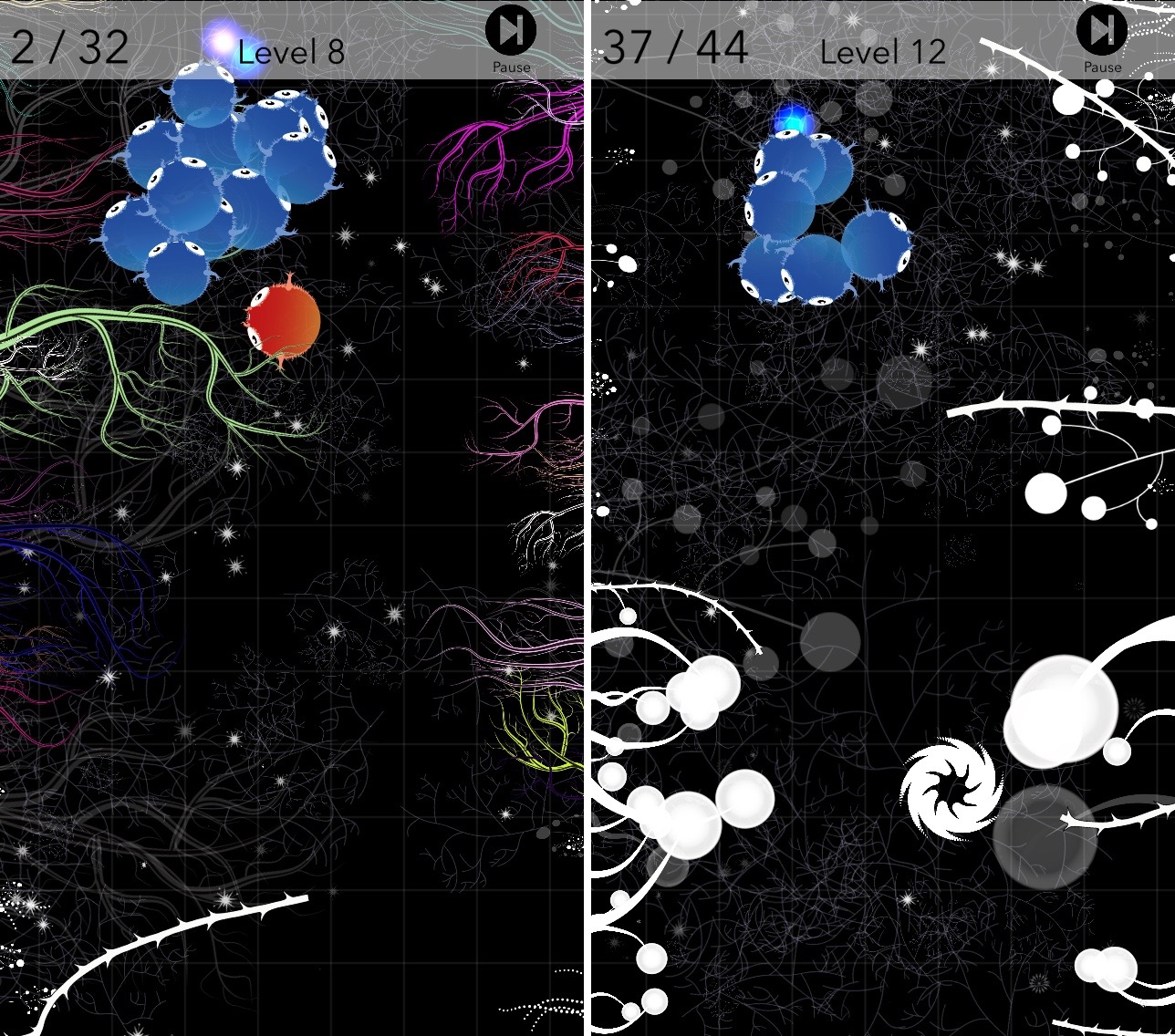 I like the way this game looks. It has lots of pretty imagery and a relaxing atmosphere. There is enough skill required that you will want to keep trying, but it is mellow enough that you can play it while listening to your friend talk about taxes, and actually hear what is being said.

The levels are randomly generated, which makes for a different experience each time.

I can’t figure out the scoring value. At the end of each level, you are presented with a percentage. However, there is no explanation as to what it represents. Did I get through 92 percent of the level? Have 49 percent of other players made it through the level? I just don’t know and it drives me crazy.

Lead Them is free to download. The game is full-page advertisement supported, which appears between levels at different intervals. You can help out the developer by purchasing a different color for your microorganism for $0.99 each. The replay value might be high if I only knew what the percentage meter meant.

As a free download, this game is good for a few hours of fun. It distracts you without requiring too much of your brainpower. You can download it in the App Store today.

Abyss Attack is a vertical shooter with a similar visual aesthetic, although the mechanics are quite different.

What do you think of this vertical casual mobile game? Let us know in the comments below.