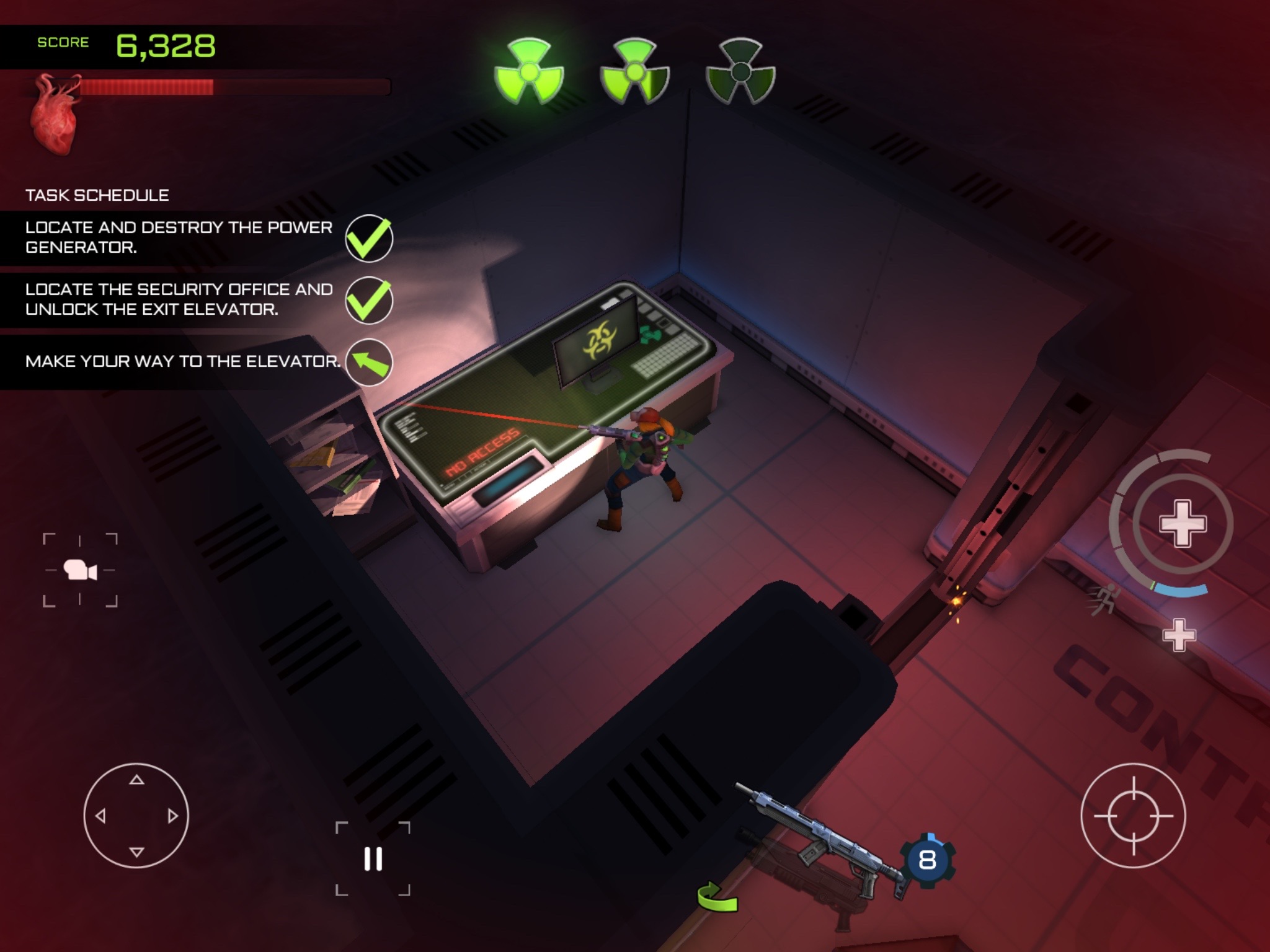 If you are a fan of top-down arcade shooters, then you know how much fun it can be to run from room to room, killing things and blowing up stuff with wild abandon. Pixelbite, the team that brought us the Sci-Fi western Space Marshals is back with a new adventure in space.

Xenowerk is an action shooter that puts players in charge of cleaning up a mutant mess left by a biological experiment gone bad. We’ve got a hands-on game review of Xenowerk for you today.

You are tasked with cleaning up a biological lab that recently had a terrible accident. An experiment left all scientists dead and turned all experiment victims into killer mutants. Your job is to clear out the lab and destroy all mutants before they multiply.

This is a top-down shooter with limited storyline, but maximum action. Players blast through level after level of monster mayhem. As you earn experience points, you unlock new weapon upgrades. You also collect money that can be used to purchase better gear. 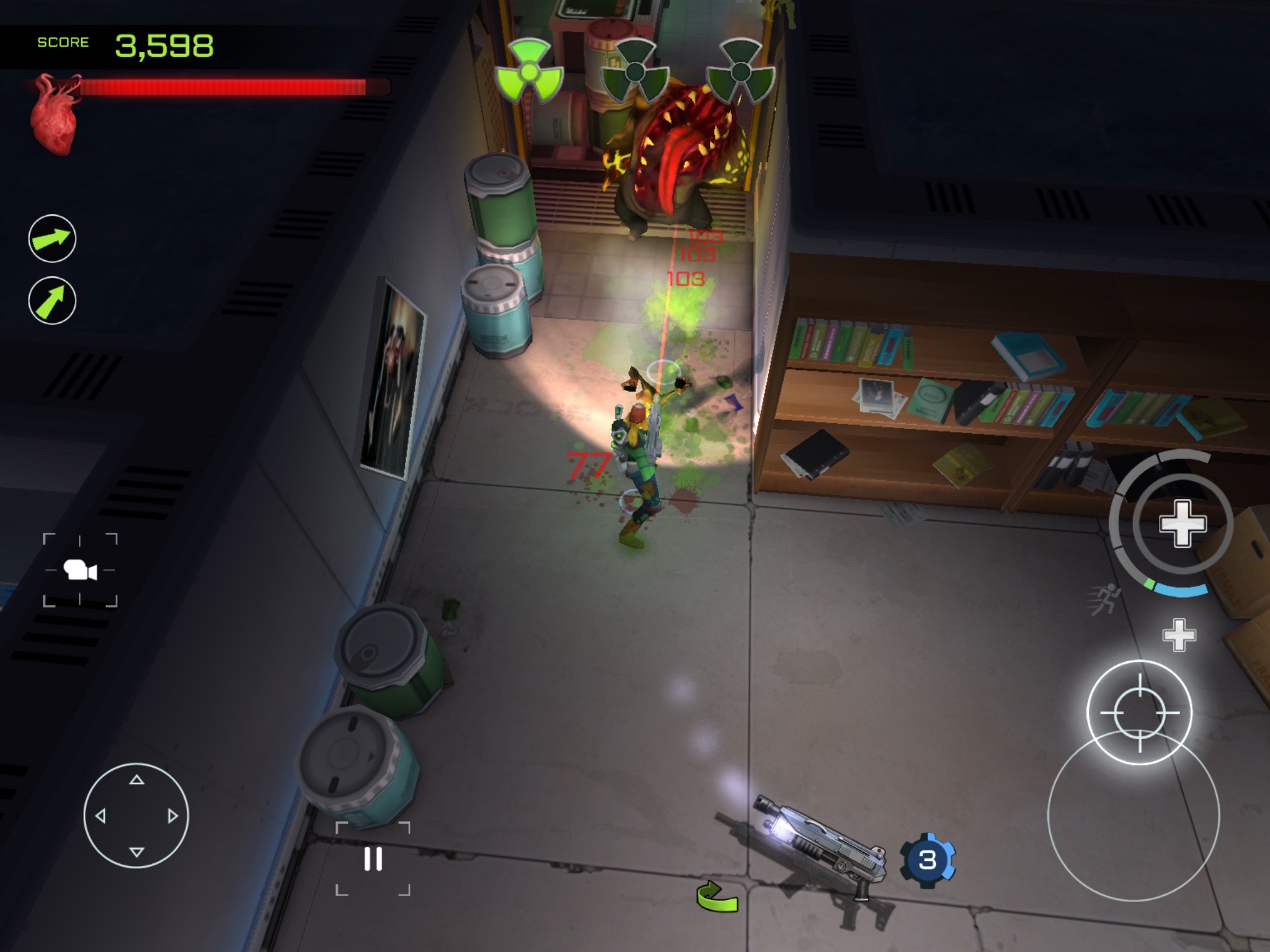 Players must infiltrate and clear out three military medical facilities using one primary weapon and one secondary weapon. You earn more points for successfully getting through a level without injury and with a higher hit rating.

As you progress, you can play earlier levels with your new weapons and armor. So, if you don’t do so well on your first attempt, earn some money to buy better equipment and try again later.

Killing bad guys will sometimes reveal cogwheels. Collect enough of them to upgrade your weapon. With the money you earn for clearing out a level, you can buy new weapons and gear. Whichever item you have equipped when collecting cogwheels will be the one to get an upgarade.

Find every mutant on a level to increase your rating. The more you kill in a row, the higher your score. A killing streak will earn you three full stars (or radioactive symbols, in this case).

You can challenge other players in your Game Center circle to beat your high score. Your score is based on your level rating.

This game does support MFi controllers. However, I found the system to be more awkward than the touch controls. The sticks were overly sensitive and adjusting them in the settings section didn’t seem to make it better. I did, however, like that you can shoot separate from aiming when using an external controller. When you play with the touch screen, aiming and shooting happen simultaneously. 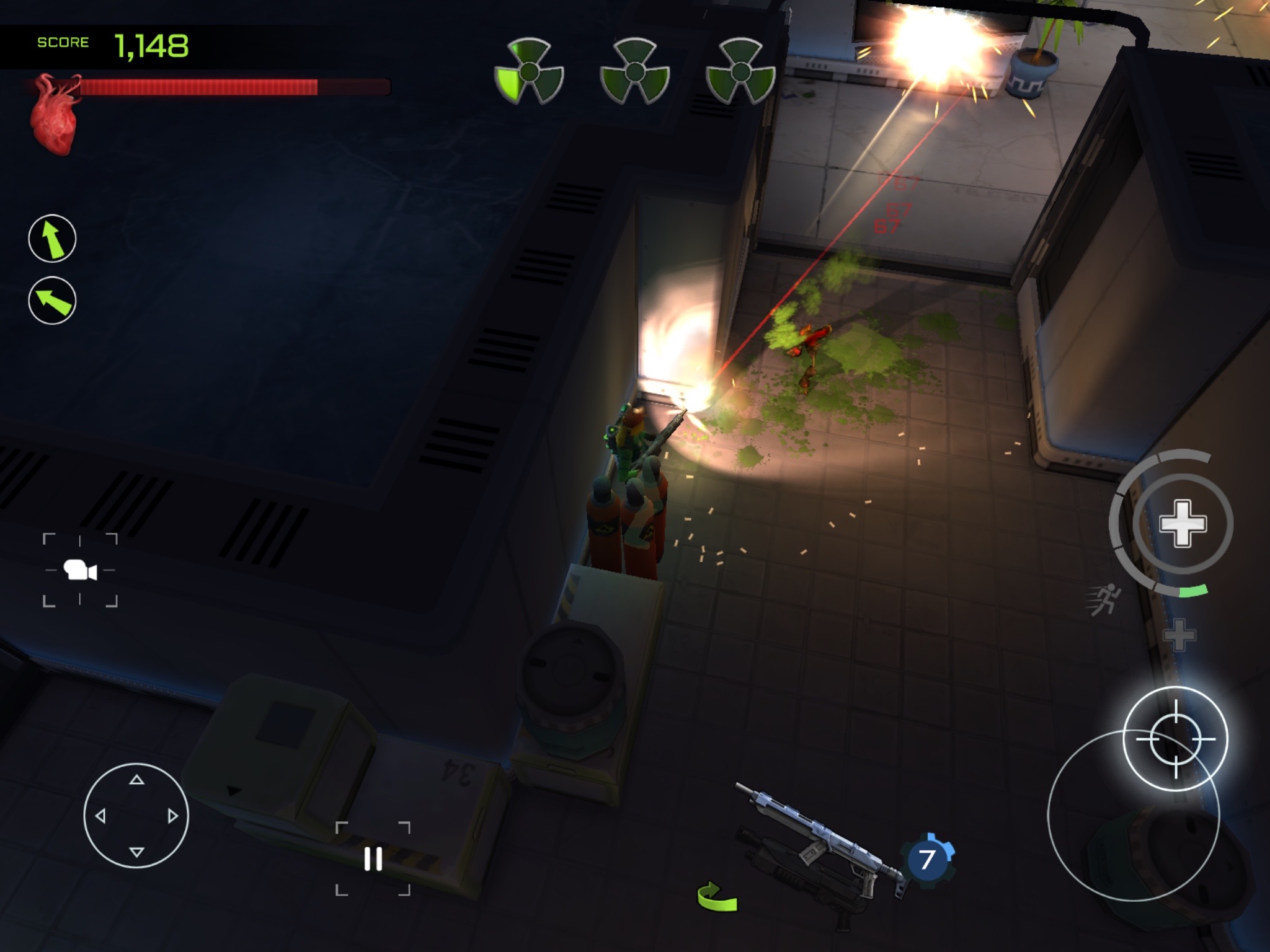 This is a very fast-paced game where speed and accuracy earn you the highest score. It is perfect for fans of arcade style shooting games; all action, little plot.

The game feels a bit repetitive. On each level, the goal is to kill all the mutants and find the exit, with a few alterations that might require you to find a control console first. There isn’t much more to it.

Xenowerk costs $1.99, which is an incredibly low price for the amount of gameplay that you get. There are 50 levels across three buildings, but the replay value is what makes it such a great game. Your rating score is what makes you stand out amongst your peers. Are you fast enough to become the number one player in the game?

At such a low price, this game will appeal to a lot of arcade shooter fans. It is well designed and has plenty of upgrades and unlockable features. The rating system will keep you coming back, looking for the highest score. This game is available on the iPhone, iPad, and iPod touch. Download it in the App Store today.

What do you think of this fast-paced arcade shooter? Let us know in the comments below.