Growing up in the 90’s provided the extreme advantage of spending late nights in front of Mech Warrior 2. Aside from King’s Quest V, Mech Warrior 2 is one of the few PC games I ever completed from start to finish. When we were contacted by Personae Studios to review their newest build of MechWarrior: Tactical Command, I had no hesitations to agree. Moving from a FPS console and desktop option to RTS, the iOS Mech Warrior experience will be appreciated by MechWarrior fans, old and new…

In typical MechWarrior fashion, the interface is seemingly 90’s grunge with a militaristic steampunk flair. The UI and HUD displays are easily translatable, navigable, and useful. During gameplay, a full level map is displayed in the bottom right corner and the available Mechs are displayed on the far right side. Available Mechs show a real time graphic and damage report, including the pilot’s name. 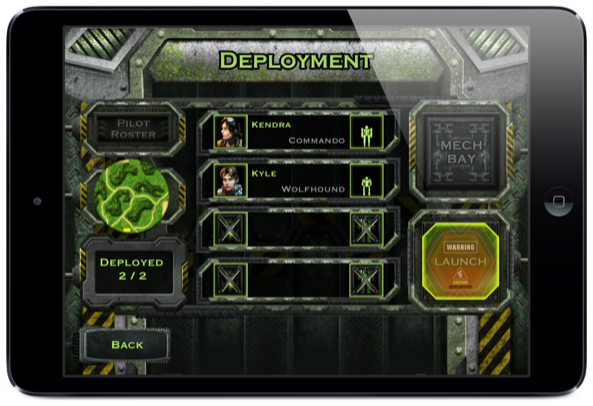 The imagery is fairly decent for an iOS device, but it is no Infinity Blade. The intro videos and cut scenes are very well rendered, giving a movie style experience to the gameplay. However, the gameplay graphics leave a little to be desired. A lot of the machinery detail is lost from an aerial perspective, but that is the nature of an RTS.

The playing board can be flawlessly rotated 360 degrees or zoomed similar to the native Maps.app. Unfortunately, one cannot pan all the way flat to the ground to watch a tactical engagement. That is to say, the viewing angle cannot be manipulated, just rotated and zoomed. 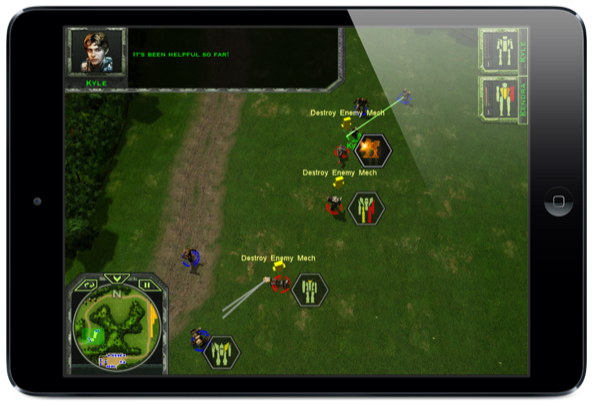 Before even entering the game menu, a low memory warning is flashed on the screen with a disclaimer about RAM usage, due to the game rendering each level before gameplay. The warning goes so far as to even suggest turning off in-game videos to reduce crashes. Speaking of crashes, the March 15th build release even notes there are known iCloud support issues leading to crashes, which  I can confirm. I assume it is being worked out for the next release, considering its steady update cycle since its release in September 2012. According to Personae:

iCloud support is introduced in 1.3.1 (1.3.0) with the launch of the iPhone release. However we DO NOT Recommend that players enable iCloud support due to way that iOS handles updates. This can cause synchronization issues which would cause the game to crash. We are currently working to improve this feature. We advise players not to enable this service for the time being.

At the time of this review, I have not been able to get my mission progress to sync from my iPad mini to iPhone 5. Additionally, after turning iCloud sync on, the game has become increasingly unsteady, crashing at random times, that cannot be replicated, except when launching a mission. After iCloud was turned on, the app crashes every time I launch a new mission. For more information, visit the support page.

As is common place in all video games these days, the tutorial is built into the first few missions. You are provided control of two Mech pilots to dispatch a few baddies and protect a few important asset landmarks. I picked up the controls fairly quickly, but struggled to turn back on the HUD controls after accidentally turning them off. After consulting the support page, this is triggered by a two-finger tap, four consecutive times. This action activates a screen capture mode and can be deactivated the same way.

The controls worked much better than I anticipated, having only played one other iOS RTS game. Instead of dragging a box around the units to select them, simply tap the desired units from the list on the right side of the screen. This action will provide unit control whether or not those units are currently on the viewable board.

Secondary actions and additional features are activated by two-finger tapping or tapping and holding on particular units, areas, landmarks, or enemies, further enhancing gameplay without the need for individual button control systems.

Navigating the board is as simple as tapping and flinging or tapping a specific location on the mini map. Panning the camera across the board creates no lagging or glitching, thanks to a fully rendered map at the level’s load. This is a huge advantage for Tactical Command. If the board were rendered as the game is played, it would be extremely laggy. For full device compatibility, check the Personae posting.

As the game progresses, missions become more difficult and additional strategy is key. The ability to upgrade and further weaponize your Mechs is a huge advantage and adds a nice caveat to the otherwise linear game play.

Everything was running smoothly with Mech Warrior: Tactical Command until I activated iCloud support. Currently, the dev team is working through the complications of iCloud syncing for both iPad and iPhone. I am glad this is an included function that will, presumably, be fixed in upcoming releases. Many games are just now starting to add progression support across devices and I applaud Personae for making it a priority. No one wants to beat a bunch of levels on their iPhone during a break at work, only to be required to beat them again on the iPad from their recliner at home.

Overall, if you plan on using iCloud to sync your game data, stay away until the known issue is fixed. However, if you just plan to use this on one device or do not care to sync, go for it. I enjoyed the levels I completed on my iPad mini, especially as a fan of RTS games and MechWarrior in particular. Currently, you can pick up this universal app for $3.99, which is a fair price, but it has been listed as high as $9.99 in the past.