It looks like Snapchat isn’t resting on its laurels when it comes to protecting its product. After it surfaced that Snapchat was beginning to lock out any one who used Snapchat-centric jailbreak tweaks, users wised up and started downgrading to an earlier version of Snapchat without such protections in place.

Today, it appears that the Venice, CA company has caught on to the downgrading trend, and is now forcing users to upgrade to the latest version of Snapchat in order to use its product. 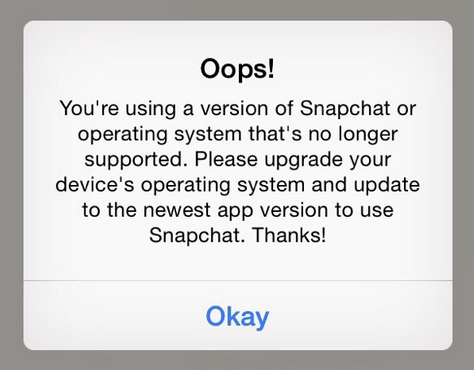 Users who try to downgrade in order to work around the jailbreak tweak crackdown are now being met with the above message when launching older versions of Snapchat.

The message is essentially telling users to either update or don’t use Snapchat.

As you may recall, Snapchat has long had language forbidding “plugins” in its terms of use, but just recently started enforcing those terms via account lock downs.

Interestingly enough, this crackdown comes around the same time as one of the popular Snapchat tweaks—Phantom—was updated to support geolocation spoofing. One of Snapchat’s features is to present special geolocation filters, essentially stickers, that let users showcase where they are in the world. This ability to spoof has apparently hit a nerve with Snapchat, and it’s doing what it can to protect its product.

Will this cat and mouse game continue? It looks to be just heating up, as word on the street says that the developer of Phantom is planning an update to circumvent Snapchat’s restrictions.

What do you think about all of this? Are you a Snapchat user? Are you a Phantom user? Sound off with your thoughts on the matter below.