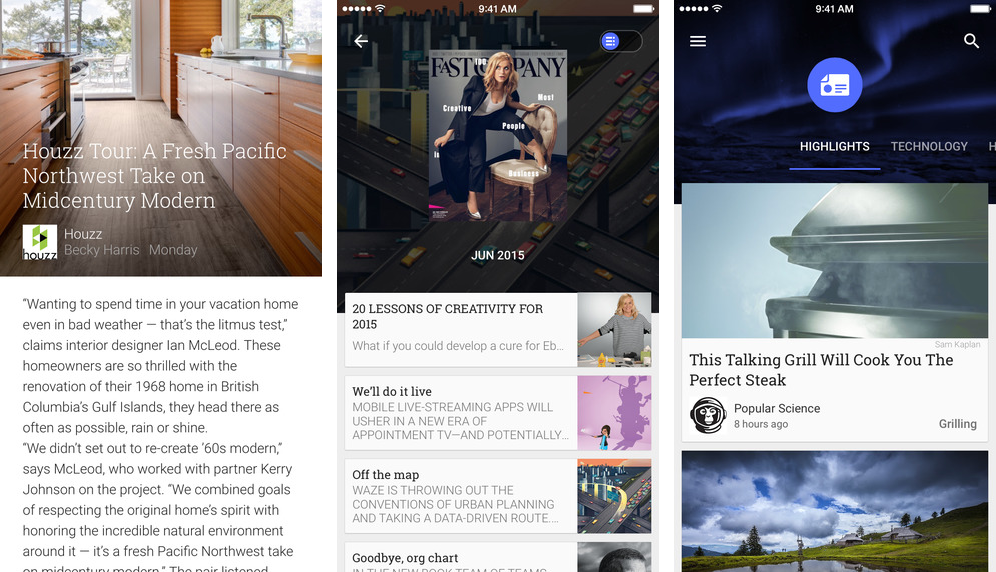 Google has updated it Newsstand iOS client (formerly Google Currents) in the App Store with much-needed support for digital magazines available on the Play Store.

The new version has arrived shortly after Apple released the iOS 8.4 software update for the iPhone, iPod touch and iPad which, among other perks, brings out support for Made for iBooks content on the iPhone and iPod touch.

Users can now read digital magazines sold on Google Play right on their iPhone and iPad in a mobile optimized format, though Google notes that publications with interactive content aren’t supported as of yet.

The Highlights feature has expanded the list of featured articles and topics and now includes articles from recent issues of digital magazines.

Content discovery has been made easier with the ability to click a link at the end of the article to find related articles. Lastly, there’s a brand new Top News cluster in the Highlights section which provides a curated selection of the most important news of the day.

The app is optimized for the iPhone 6 and iPhone 6 Plus.

Earlier in the year, it picked up offline support and Handoff so users can start reading an article on their iOS device and resume just where they left off on their Mac running OS X Yosemite, and vice versa.

The 13.2-megabyte universal app requires an iPhone, iPod touch or iPad with iOS 7.0 or later. It’s optimized for the iPhone 5/5s/5c, iPhone 6 and iPhone 6 Plus screen sizes and currently lacks a WatchKit component.