Following its announcement back in December 2014, the official teaser trailer for Story Mode has now premiered at the Minecon show in London. The video depicts a game set in the world of Minecraft with its own original story that will be driven by player decision. The game will consist of five episodes, with the inaugural episode set for release in 2015.

Offering a mix of new characters with original themes packaged into an entirely original experience, Story Mode will take players to the Nether, the Farlands, the End and beyond, with their actions directly influencing how the story unfolds.

However, Story Mode won’t create an “official” story for Steve or explain the world of Minecraft in detail. “Players will control protagonist Jesse throughout the season, as portrayed by actor Patton Oswalt,” explains the blurb.

“Jesse and his group of friends revere the legendary Order of the Stone; four adventurers who slayed an Ender Dragon. The Order is the very best at what they do: Warrior, Redstone Engineer, Griefer and Architect.”

But terror gets unleashed so EnderCon, Jesse and his friends set out on a journey to find The Order of the Stone and, predictably, save their world from oblivion. For those wondering, Story Mode does implement the digging and building element of the original Minecraft but in an entirely different format that is suitable for episodic gameplay.

Telltale likened the game to enjoying a playable television show.

As mentioned before, the storyline depends on what you say to people, how you say it and what physical actions you choose to take in moments of action, meaning that the game you experience could be “very different” from someone else’s.

Just to be clear here, Telltale is Story Mode’s developer, not Mojang which licensed the rights to create a story-driven Minecraft experience to Telltale. According to Mojang, Story Mode is “a cool game” that will be “as Minecrafty as possible.”

The voices for the characters in the game are provided by a cast of familiar like Patton Oswalt, Brian Posehn, Ashley Johnson, Scott Porter, Martha Plimpton, Dave Fennoy, Corey Feldman, Billy West and Paul Reubens, with more to be announced at a later stage.

It’s a standalone game so you’ll be able to play Story Mode without owning the original Minecraft and enjoy it even if you didn’t play Minecraft before.

As is Telltale’s wont, you will be permitted to buy each episode individually, or purchase a discounted one-time Season Pass via the In-App Purchase mechanism that will either grant you instant access to all of the episodes or include episodes 2 to 5 as they become available. 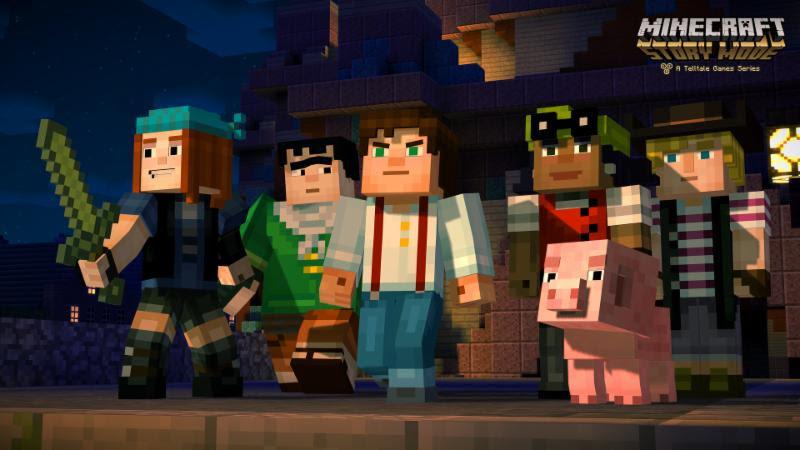 Telltale’s other episodic titles include hit games like The Walking Dead, The Wolf Among Us, Tales from the Borderlands and Game of Thrones.

Minecraft: Story Mode will launch soon for iOS and Android devices, Mac and Windows PCs, Sony’s PlayStation 3 and PlayStation 4 and Microsoft’s Xbox 360 and Xbox One.

We’ll keep you updated as the game inches closer to release.

In other Minecraft news, Mojang announced a whole new version of Minecraft for Windows 10 is due for release on July 29.