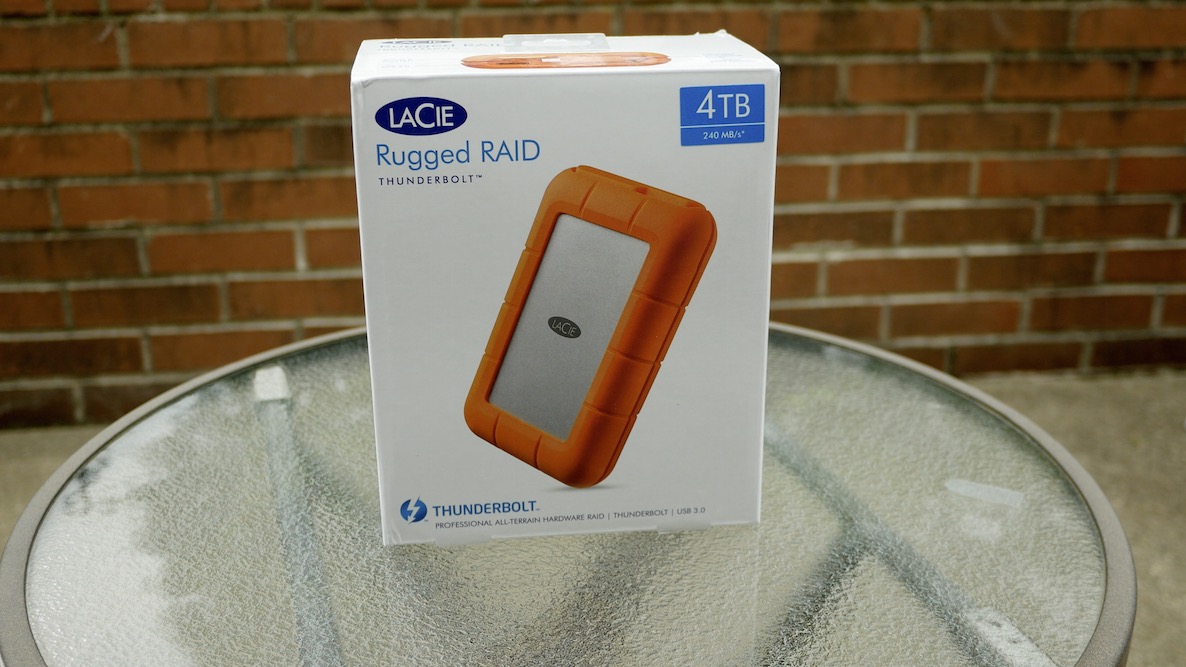 For the past few weeks, I’ve been testing out the Neil Poulton designed LaCie Rugged RAID portable hard drive. This drive, with its can’t-miss color, is specifically designed to stand up to tough environments.

The Rugged RAID features a rubber non-slip casing that will help it absorb impacts and stand up to harsh conditions. In fact, it’s dust, water, and shock resistant. If you’re someone who travels with an external hard drive, then you’re automatically more susceptible to all three of these potential failure-inducing scenarios. This can make the LaCie drive an attractive prospect.

Not to be confused with similar-looking drives in the LaCie lineup, this Rugged RAID drive actually ships with two independent hard drives pre-configured with RAID 0 for a total of 4TB of space. This provides end users with lots of headroom and extremely fast read and write speeds.

Needless to say, I’ve had high expectations for this hard drive ever since it was first announced. Does the LaCie Rugged RAID live up to this OS X user’s expectations? Read and watch the full review to find out.

I can’t lie and say I’m head over heels for the design of this drive. I guess it’s not the design as much as the color that makes it a little hard on the eyes. But with that said, no one can mistake this drive for anything else, and the bright orange color makes it easy to spot in a cluttered area.

My favorite thing about the design is the fact that it features a non-removable built-in Thunderbolt cable that neatly wraps around the exterior of the drive and tucks away inside its housing. It even features a removable cap that snaps on to the end of the Thunderbolt cable for a neat and self-contained look.

In my opinion it’s great to have a Thunderbolt cable that’s always there, but I understand that some may not like this feature. If the Thunderbolt connector goes bad, then there’s no way to replace the cable with another one. That said, I think the chance of that happening is low with this drive, as the cable isn’t flimsy, and the Mini DisplayPort connector feels solid as well.

As you would expect with a RAID 0 configuration, performance is really good for a spinning disk setup. In my Blackmagic speed tests, I averaged over 200MB/s for read and write. Obviously that’s not enough to saturate the throughput potential of Thunderbolt or USB 3.0, but it’s nice to have plenty of headroom to work with. 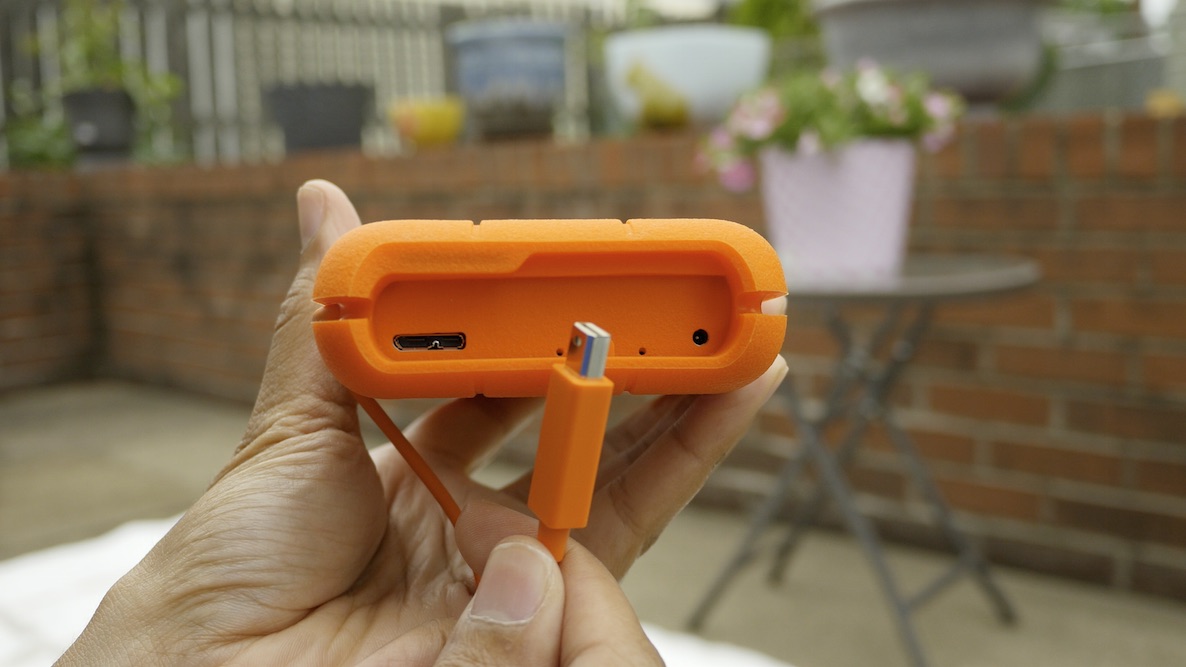 I didn’t bother enabling the drive’s RAID 1 configuration, as it ships with RAID 0 pre-configured, but RAID 1 is an option. RAID 1 will come at the expense of HDD space—you’ll lose about half of the disk capacity—but it means that, unlike RAID 0, it will still being able to function if one of the drives in the array fails.

Since I plan on using this drive to hold non-essential items like scratch data for video, RAID 0 is perfect for me. I need the absolute fastest configuration possible, and the default configuration for the Rugged RAID is just that.

If I were backing up photos, or other important pieces of information, I’d definitely consider going with a RAID 1 configuration. It’s just hard for me to recommend using this drive in that way, because speed is one of its hallmark features, and you can only obtain that speed by using RAID 0.

The fact that the LaCie Rugged RAID comes with a built-in Thunderbolt cable, and is bus powered, means that it’s inherently more portable than many other drives. Sadly, the USB 3.0 setup isn’t as seamless. It requires both a USB cable and a power connection, since the USB connection doesn’t provide power.

Due to the ruggedness of this drive, it’s a little bigger than one may expect. It’s also quit dense. It’s still portable, but there are much smaller drives with the same amount of storage space and similar performance.

You’re going to have to determine whether or not the rugged aspect of this drive is a need. Personally speaking, I think it’s very nice not to have to worry about handling the drive like it’s a piece of fine china. You can easily chuck it in a backpack without worrying about it.

Make no mistake about it, at around $400, this is an expensive drive. But you’re paying for its ruggedness and the peace of mind that comes from that. Your money is also going towards Poulton’s sleek design, although the color of the protective casing wouldn’t have been my first choice.

You’re also paying for a built-in Thunderbolt cable, and the fact that it’s bus powered using said cable. Being able to simply grab this drive without having to worry about any cables will be a highly valuable feature for some.

Mac users with Thunderbolt port-equipped computers are obviously the primary target of this drive. It can be used on machines that only feature USB connectivity, but it comes at the expense of convenience.

The LaCie Rugged RAID is also very fast in its stock RAID 0 configuration, but that too comes at a cost, as RAID 0 is inherently less reliable than other RAID configs. 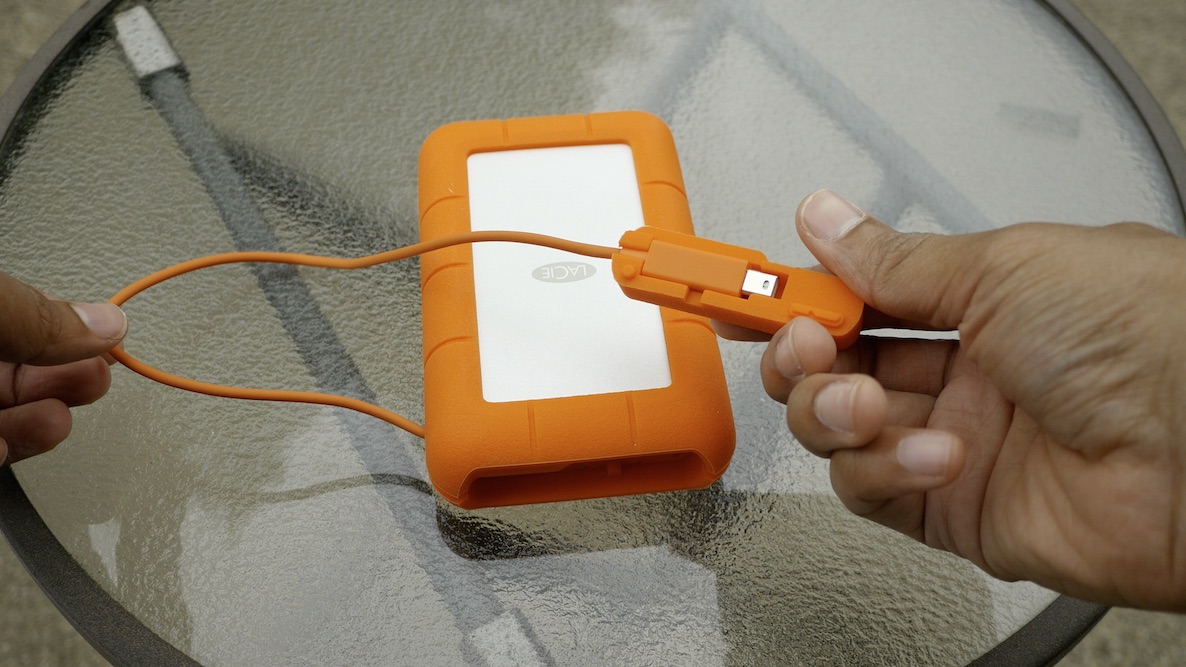 If you’re a Mac user that’s frequently on the go and need easy plug and play convenience, then this drive is quite the compelling package. It features tons of space, it’s easy to use, and you just don’t have to worry about it.

For someone like me who edits video on the go with a MacBook Pro, this drive is quite compelling. It won’t be that way with everyone, but if your workflow sounds anything like mine, then I’m betting that you’ll love it.

What do you think? Sound off below with your thoughts and opinions.